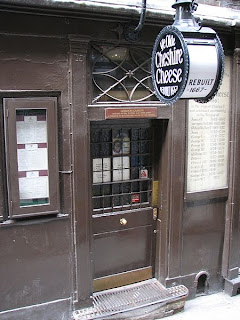 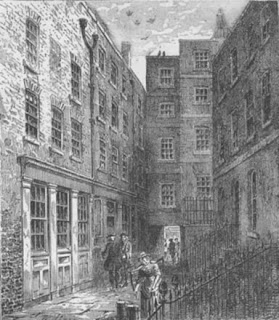 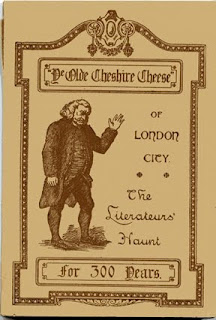 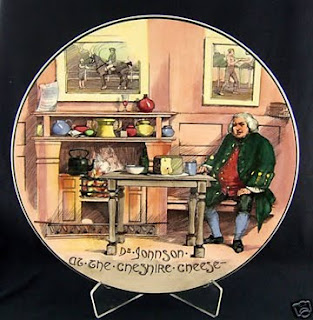 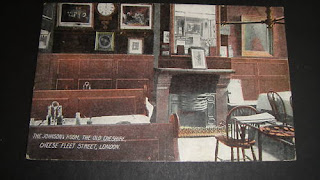 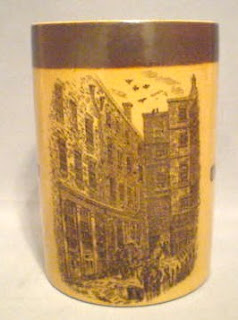 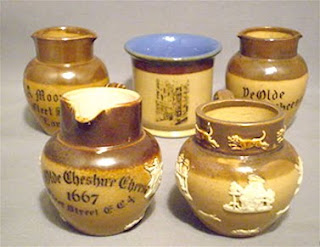 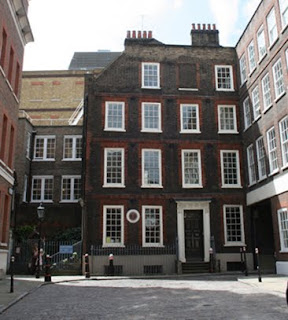 In London, England, just off Fleet Street in a mews called Wine Office Court is a tavern known as “Ye Olde Cheshire Cheese.” Dating from at least 1667 and seen here in a 19th Century etching, this landmark rates at least a paragraph in virtually every London guidebook. British Heritage magazine has listed it among the 100 best pubs in England.

Although many great writers like Charles Dickens and Mark Twain have been known to visit Ye Olde Cheshire Cheese over the centuries, the establishment has identified itself most closely with with one of England’s most renowned literary figures, Dr. Samuel Johnson (1709-1784). Johnson is perhaps best known for his pioneering Dictionary of the English Language. A man of enormous intellect, he equaled it in physical bulk, loving food, drink and conversation. In every instance, he believed, these were best obtained in a tavern.

Such establishments were, Johnson avowed, among England’s greatest achievements: “At at tavern there is general freedom from anxiety. You are sure you will be welcome; and the more noise you make, the more trouble you give, the more good things you call for, the more welcome you are....There is nothing yet which has been contrived by man by which so much happiness is produced as by a good tavern or inn.”

With such an enthusiastic customer, it seems clear why Ye Olde Cheshire Cheese has been so assiduous in claiming Johnson as its own. For example, a 1937 Cheshire Cheese pamphlet, shown here, labels itself “The Literateur’s Haunt for 300 Years” and has Johnson’s picture on the cover. A 1952 souvenir plate shows him sitting in a corner of the tavern and a 1908 postcard photograph depicts a similar scene in what is dubbed, “The Johnson Room.” No wonder years of guidebooks have steered tourists to this alley pub.

In fact, while he was compiling his historic Dictionary, Johnson lived just around the corner in a large rented house with three floors and a spacious garret. It not only was home to the writer and his wife, but also the studio/office where he worked on the tome with a team of assistants. Surely the famous Englishman must have been a frequent patron.

Or that was what I thought in 1990 when in London a friend and I -- Yankee tourists -- ventured into Ye Olde Cheshire Cheese for a lunch of roast beef and Yorkshire pudding. A rambling structure, the tavern is a series of bars and dining rooms with wooden benches and working fireplaces. It also has myriad souvenirs for sale, including beer mugs, creamers and cheese pots. Dimly lighted and smoky, the room in which we ate was dominated by a large portrait of Dr. Johnson.

After lunch we walked around the corner to Johnson’s Gough Square house, shown here, which now is a museum in his memory. “We have just come from Dr. Johnson’s favorite tavern, Ye Olde Cheshire Cheese,” I announced proudly to the curator. Clearly annoyed he replied: “There is no evidence he ever stepped inside THAT place.” “But,” I stammered, “all the guidebooks....” “Bosh,” he said with finality.

Upon returning to the U.S. I did prodigious research including rereading the famous biography of Johnson by Thomas Boswell. Boswell, who spent many evenings with the sage, mentions many taverns frequented by the literary giant. They include the Crown and Anchor, Clifton’s of Butchers Row, The Turk’s Head, Le Teliers, Parsloes, and the Mitre. Nowhere in Boswell or any other biography I could find any mention of Ye Olde Cheshire Cheese.

While it is possible that Johnson dropped into this nearby establishment from time to time, independent validation is lacking. I subsequently wrote an article on that topic that appeared in a British magazine and later in my book on UK whiskey ceramics. Recently I noted that at least one London guidebook now admits that no real proof exists that Johnson ever frequented Ye Olde Cheshire Cheese.

Would Johnson have minded that his name and image have been appropriated, perhaps illegitimately, on puff materials and souvenirs for a dingy London pub? Perhaps not. After all it was Johnson himself who once told a friend: “A tavern chair is the throne of human felicity.”
Posted by Jack Sullivan at 6:22 AM No comments: 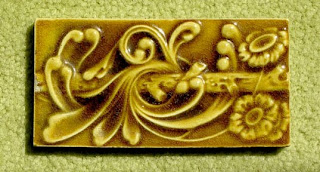 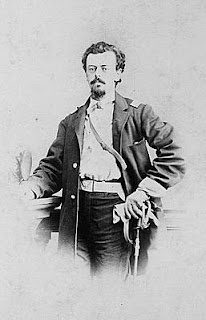 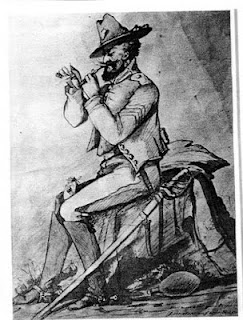 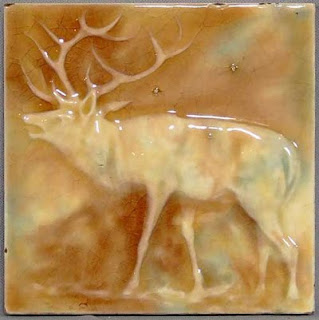 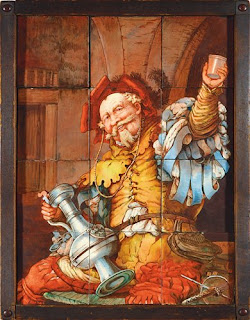 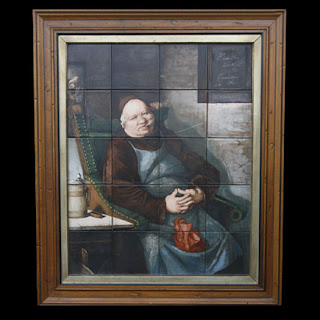 In December 2009, this blog concerned finding the past in cyberspace. My post featured a glass paperweight that revealed the fortunes and conflicts of Hungarian laxative waters a century ago. More recently I purchased a pottery tile that through Internet research has revealed the life and hard times of a talented German immigrant to the United States and his dreams -- and disappointments -- in creating high art through ceramics.

The brown Victorian-style tile, shown here, is marked on the back with the name Hamilton Tile Company. This short-lived firm was the passion of Adolph Metzner who was born in Germany in 1834 and emigrated to the U.S. in the early 1850’s. He settled in Louisville, Kentucky, and learned pharmacy but always dreamed of an artistic career. When the Civil War broke out, he joined the all-German 32nd Indiana Regiment and was made an officer. Shown here in his captain’s uniform, Metzner became the regimental cartographer and artist, creating more than 100 drawings and watercolors of army life. He also was involved in bloody combat at Chickamauga, Shiloh, Missionary Ridge, and other battle sites.

After the war Metzner, apparently at the behest of a fellow officer in the 32nd, settled in Indianapolis. Now married, he put his dreams of being an artist aside and took up pharmacy again, For the next decade and a half, he labored as a druggist. At night, he experimented with making ceramics in a back yard kiln, achieving some proficiency.

When his young wife became ill, he tried to cure her with the medicines he knew, but failed. With her death, Metzner, heartbroken, abandoned pharmacy, pulled up stakes and with his two sons, Otto and Max, moved to Hamilton, an Ohio town near the Indiana border, to pursue his dream. In 1883 he purchased an existing pottery there and set out to make art tiles, which were very popular at the time. He called his operation the Hamilton Tile Company. A contemporary source described Metzner’s efforts:

“There was no money to work with and things looked blue indeed. The tile making was a constant series of hard experiments and the Metzners stood by it nobly. They would work away and get out a batch of tiles and get them in the kiln and would then skirmish around and scare up money enough to buy a load of coal and fire up the kiln and then with anxious hearts they would watch around that kiln hoping for respectable results. When the kiln was opened out would come another failure. And this thing repeated itself time and again. A less hopeful man than Metzner would have quickly given it up.”

But Metzner did not surrender. Beginning in about 1884, with the financial participation of an old Army buddy, success crowned his persistent efforts and the firm produced enameled tiles whose quality was among the highest in the country. Examples are provided here.

Once more, however, Metzner’s dreams were dashed as success was fleeting and lucrative markets proved elusive. By 1901, the pottery had failed financially and was purchased by outside interests. Metzner himself moved to Zanesville, Ohio, to labor for another tile maker. After four years, he moved on to a pottery in Perth Amboy, New Jersey, where he worked until his retirement. This artistic dreamer, who had seen so much hardship and disappointment, died there in 1918 at the age of 84. His burial site is unknown even to his descendants.

Adolph Metzner’s artistic achievements, however, have been recognized by subsequent generations. Shown here is a tile work depicting Shakespeare’s Falstaff, the work of Metzner’s hand, which recently sold for almost $2,000. His tiles of a monk contemplating a beer was taken by a great grandson to the PBS Antiques Road Show not long ago and priced at $5,000. In death, if not in life, Metzner achieved his dream.
Posted by Jack Sullivan at 7:20 AM 2 comments: