Mephisto In Advertising? The Devil You Say! 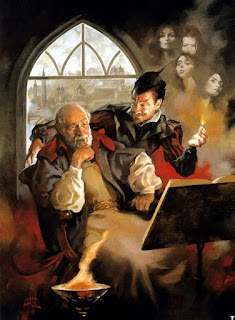 As we move into the Halloween period and all manner of spectral figures appear on houses, it is an appropriate time to look at a famous demon featured in German folklore; in the writings of the German writer, Johann Wolfgang von Goethe, and in a French opera by Charles Gounod.  The demon is Mephistopheles, often called simply Mephisto.  Despite his sinister reputation, Mephisto often has been portrayed in advertising messages.

It is through Goethe and Gounod’s works on Dr. Faustus that this figure came into worldwide prominence.  The key moment is shown above, as Mephisto shows an aging Dr. Faust that he can be young and vigorous once again, and possess the body of the beautiful and virtuous Marguerite, if he will only sell his immortal soul to Satan.  Tempted by the offer, Faust agrees and is restored to youth. 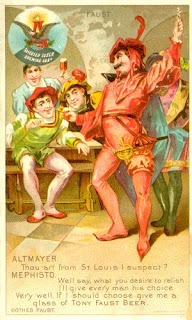 Advertisers largely have ignored the Faust angle, preferring to concentrate on Mephisto himself, as a tantalizing symbol of attractive evil.  Among his principal fans was Adolphus Busch, the head man at the famous St. Louis brewing company.  About 1900 he issued a series of trade cards advertising Budweiser that depicted spoofed scenes from popular German operas and plays.  Among them was one showing Mephisto, dressed as a cavalier, greeting a group and offering to buy drinks.  One inquires:   “Thou are from St. Louis I suspect?”  To which Mephisto replies:  “Well say, what you relish.  I’ll give every man his choice.  Very well, If I should choose, give me a glass of Tony Faust beer.” 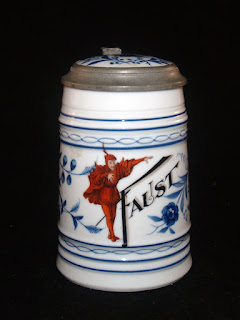 A close friend of Busch was Tony Faust, a man who owned an oyster house and restaurant in St. Louis.   A contemporary account said of this watering hole:  “Few people in the West have not heard of Tony Faust’s resort, and fewer still of those who come to St. Louis that do not visit his establishment.” Busch is said to have had lunch at Faust’s restaurant every day.   Busch’s daughter Anna married Faust’s son in a lavish wedding in 1897.  Adolphus showed his respect and admiration for the restauranteur by naming a brand of beer after him. The Faust beer bottle bore a figure of Mephisto, as did an ornamental stein that Busch issued. 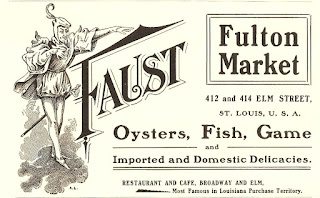 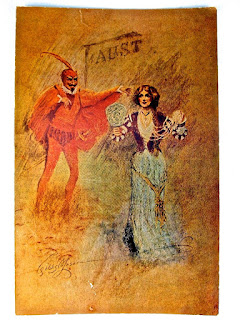 Tony Faust himself made use of the devil image in his advertising, featuring Mephisto to advertise to advertise his restaurant and cafe, as well as his Fulton Market, a source of oysters, fish, and other “imported and domestic delicacies.”  He also depicted the evil one on the cover of his restaurant menu, where filet mignon could be had for sixty cents.  There Mephisto is threatening the unwary and beautiful lady for whom he has enticed Faust to sell his soul.

When the Jim Beam company issued a series of ceramic containers for their whiskey during the early 1960s,  Faust was among the operas included.  Mephisto was a natural choice from that work, shown in the figural left, depicted without horns in the costume of a cavalier.  He carries a sword and would have contained a fifth of whiskey.  As an additional gift to the distillery customers, Jim Beam threw in a “mini-me” version of Mephisto, shown right.  It is a solid ceramic which obviously works better as a paperweight if lying down. 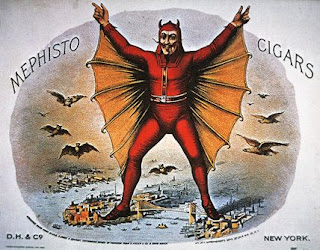 Other advertisers have not hesitated to show Mephisto in his full devilish mode.  Among them was David H. McAlpin, a man who had begun making his own living at ten years old and at the age of 20 opened his own cigar store in New York City.  He grew the business into a chain of stores and featured his own brands of stogies, including “Mephisto.”  McAlpin did not disguise this devil, his boxes and advertising featuring a figure astride the city in full satanic mode. 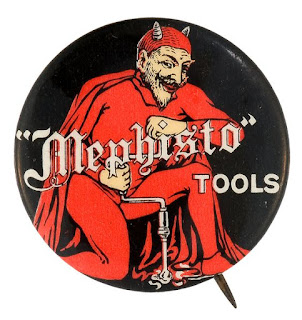 “Mephisto” Tools advertising tones down the devilish aspects a bit, but still portrays the renowned demon with a wicked smile as he drills down — possibly on someone’s skull.  The brand dates back over 185 years, according to Wallace Metalwork of Kempton, Pennsylvania, that currently produces Mephisto’s caulking, plumbing and other specialty tools.  The Wallace folks reassure us that the tools are 100% made in the U.S.A. 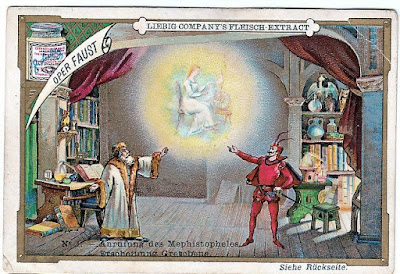 Foreign advertisers also have made use of Mephisto’s image.  He figures in several play and opera-based trade cards issued by the Liebig’s Extract of Meat Company, named after Baron Justus von Liebig, the German 19th Century organic chemist who developed the product.  The meat extract is a black molasses-like sandwich spread packaged in an opaque glass bottle. The Liebig card above shows another version of Dr. Faust’s temptation.  This time the virtuous woman, named Gretchen a la Goethe, is shown in a glow at her spinning wheel.  Below, now as Gounod’s Marguerite, Liebig’s trade card shows her succumbing to Faust while Mephisto leads away her female companion. 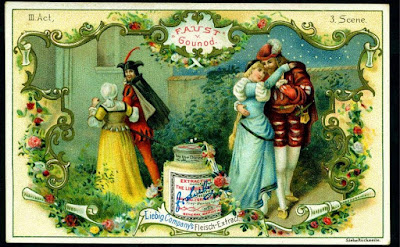 As it must in opera, all this ends badly.  Marguerite is seduced but still remains  pure, dies, and is carried to heaven by angels.  Mephisto comes to Faust to claim his soul and although Faust resists, carries him to Hell “kicking and screaming” (opera style). 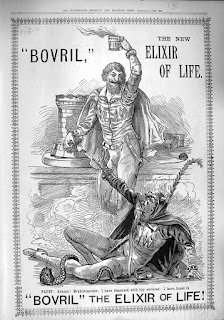 What Faust apparently lacked, if this final ad is to be believed is Bovril, the English beef extract beverage.  Faust is triumphant and says:  “Avaunt, Mephistopheles; I have dispensed with thy services!  I have found “BOVRIL, THE ELIXIR OF LIFE!”   It seems a shame that neither Goethe nor Gounod apparently knew about Bovril, they might have spared Dr. Faust.  I always felt a little sorry for the guy myself.

Because clown gear for trick-or-treaters is being discouraged this year, some kids ringing your doorbell may be wearing a devil costume.  While dishing out the goodies, you now can enlighten them with tales of Mephisto and his wiles.  Just skip the seduction part.


Posted by Jack Sullivan at 6:11 AM No comments:

The Coffin on the Desktop Was a Grave Reminder

Perhaps the most unusual industry to favor paperweights as a method of advertising their wares was the casket-makers.  While the idea of contemplating a sarcophagus as one goes about the desk work of the day may strike a millennial as very odd, at the turn of the last century it was not an uncommon sight for a clerk to hold his papers down with a miniature coffin.

One company, Crane & Breed, principally may have been responsible for this phenomenon, creating a whole spectrum of paperweights to bring attention to its caskets.  The history of Crane & Breed can be traced to a New York inventor named Almond Dunbar Fisk who designed and patented a coffin that resembled an Egyptian sarcophagus with sculpted arms and a glass window for viewing the face of the deceased — and allowing the corpse to look out. 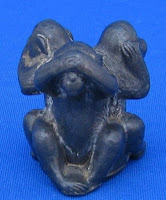 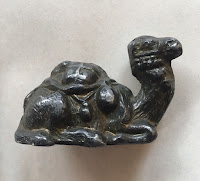 Crane & Breed Casket Co. went out of business in 1973, but, as one historian has put it:  “They’re mainly remembered for their bronze novelty paperweights which were produced as a side-line during the late 19th and early 20th Century.”   That may be because those weights are the company’s only products not currently below ground and out of sight.  Some C&B artifacts were in shapes other than coffins.   Among them were a camel, the “hear no evil, see no evil, speak no evil” monkeys, and other animals.  All had the company brand on the base. 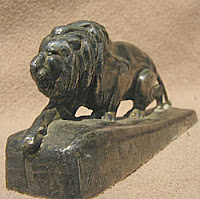 This aggressive advertising by Crane & Breed appears tohave spurred many other coffin makers into a similar merchandising strategy.  The Orange Star Casket Company seems to have faded into the mists of history except for its paperweight.  Dating from the early 20th Century, its weight is a heavy metal lion that comes up or sale from time to time on auction sites. 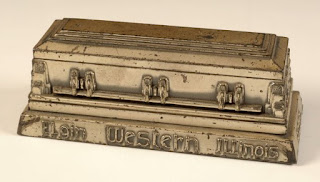 By contrast, the Elgin Metal Casket Company, represented here by a coffin paperweight, was the resting place for many well known Americans.   Former President Calvin Coolidge was interred in one in Plymouth Notch Cemetery in North Hampton, Massachusetts.   The body of John F. Kennedy was transported from Dallas to Washington in an Elgin casket after his assassination in 1963. That firm, one that began as a division of the Elgin (Illinois) Silver Plate Company in 1892 is now owned by Gulf & Western and operates from a plant in Indiana. 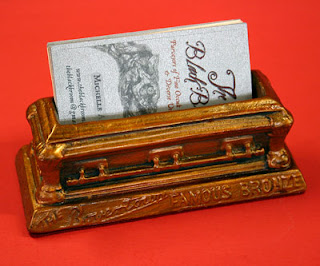 Today the Boyertown Burial Casket Company is reputed as the second largest casket company in the world.   It was formed in the late 1800s after undertakers in the Pennsylvania city were having trouble getting caskets for burials.  Bodies were piling up without a decent place to lay them.  Boyertown businessmen joined together to establish the firm.   The Boyertown paperweight shown above doubles as a repository for business cards.  I for one would be somewhat disconcerted if a executive reached into a coffin to give me his card — maybe expecting a pirate “black spot” to come out of it. 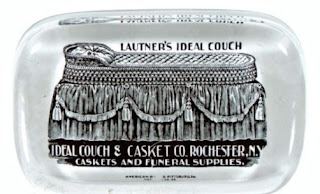 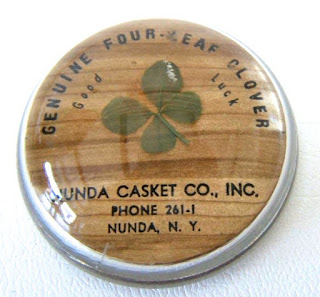 The Nunda Casket Company took an entirely different marketing strategy.  Instead of reminding its customers of their ultimate need for such a box, it emphasized the positive in providing customers with a real four leaf clover and the admonition, “Good Luck.”  The base of this object carries a note about what it terms a “Lucky Clover Executive Paperweight.”   It explains that the clover was grown in Balboa Heights, Panama Canal Zone by one C. T. Daniels.  Daniels, it claimed, “has solved Mother Nature’s secret of productivity, an achievement unparalleled in the history of horticulture.”  Just to grow four-leaf clovers? 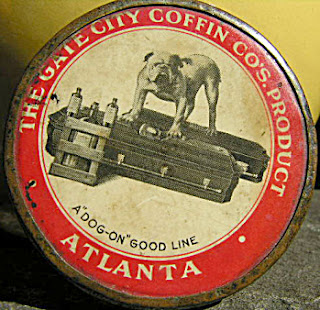 Our last example is from the Gate City Coffin Company with a strange message.  It shows a bulldog standing on two coffins behind a display of what may be embalming fluid.  The slogan — and the reason for the presence of a canine — is “A ‘Dog-On’ Good Line.”  The origins and history of this firm also has been obscured over time.  Like Crane & Breed that opened his post, we must rely on the artifacts to remind us of the manufacturers who gave us such products.

There they are, ten examples of how the casket makers hoped to keep the attention of the public by gracing an office desk with a replica of a final resting place.  In the words of the poet Thomas Grey, these paperweights remind us that: “The paths of glory lead but to the grave.”