What the Heck Are Nordhausen Kornschnapps? 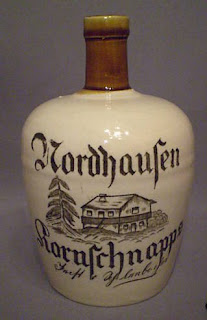 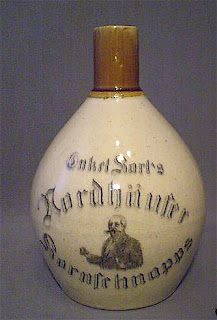 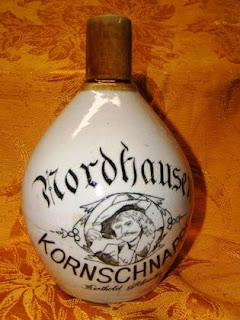 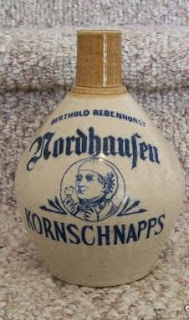 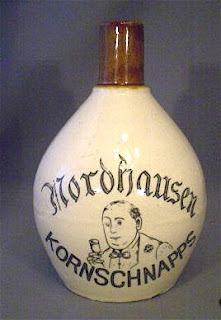 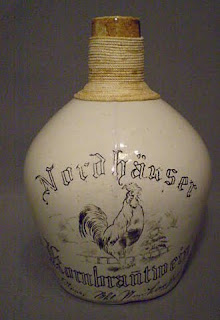 My first artcle about Nordhausen Kornschnapps was published in 1992, featuring stoneware liquor jugs with highly interesting underglaze transfers. Since that time I have collected some and identified others until it seems appropriate in this post to revisit the subject of Kornschnapps jugs (and their “cousins” the Kornbrantweins) -- and to provide a list of known versions.

The jugs shown here are pre-Prohibition. The one sure confirmation of their age is the Nordhausen Kornschnapps jug featuring a chalet. An illustration of it appears in a 1902 liquor ad from Chicago dealer Simon Hasterlik. Prohibition brought the sale of alcoholic beverages to a screeching halt in the United States in 1920 for about 15 years. After the end of the Dry Era, all liquor containers required a federal warning for the ensuing 30 years. No kornscnapps jugs have it. Conclusion: The marketing of kornschnapps in quart ceramic jugs ended in the United States with the Volstead Act.

Kornschnapps, although identifiably German, was aimed at an overseas audience and these containers are found as far away as Australia and New Zealand. German émigrés and their descendants almost certainly were the principal market. The end of the 19th Century in the U.S. liquor merchants merchandised their wares by appeals to the “old country.” Irish whiskey was decorated with shamrocks and harps; Scotch with thistles and bagpipes. Kornschnapps containers involved script, names, words and images easily associated with the Fatherland. Moreover, since the Middle Ages the town of Nordhausen has been a well-known German distilling center.

While some kornschnapp jugs were made in Scotland by potters such as Port Dundas, others were produced in the United States. Catalogues from the early 1900s indicate that some, like the “Onkel Karl” jug shown here, were designed and manufactured by Sherwood Brothers Pottery of New Brighton, Pennsylvania.

What kind of liquor was inside these bottles is anybody’s guess. Schnapps is a name given to a wide range of alcoholic drinks. In Europe the term generally is applied to a vodka-like liquor made from grain or potatoes. Many Germans use the word to denote any strong spirits, according to Rosalind Cooper in her book Liquors and Spirits. She says kornschnapps can taste like London gin, Dutch genever or even American rye whiskey -- a very wide range,

I have compiled a list of the known kornschnapps jugs, along with some indication of rarity. The ratings are notional and based almost entirely on personal observation. Although this list has remained unchanged for at least a decade, other ceramic examples may exist. Anyone wishing to make a contribution to the list or challenge the ratings should be in touch with me via email.