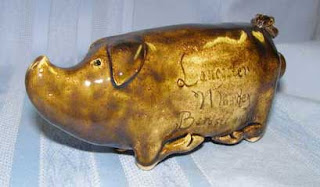 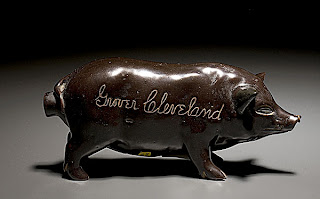 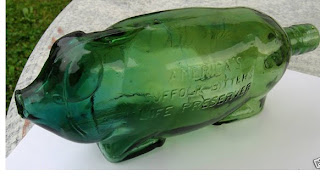 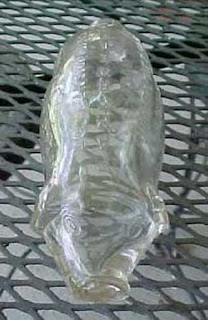 The picture shown in my last post of a pig drinking from a jug of moonshine triggered some thinking about how many porker shaped bottles there are and the fact that the swigging hole is located at a particularly unattractive place at the rear of the animal. Many believe that this was an anti-alcohol message and cite the Kirkpatrick brothers, Cornwall and Wallace, as the example.

After having failed in the pottery business in Mound City, Illinois, the Kirkpatricks in 1859 founded a pottery in Anna, a small town in southern Illinois, and called it the Anna Pottery. Their new location was successful because of rich deposits of clay in the neighborhood and access to railroad transportation to ship out their regular line of utilitarian stoneware and earthenware products.

Both men were staunch Prohibitionists with strong opinions about drinking, a habit they associated with political corruption. The Kirkpatricks set out on a single-minded campaign to create pottery containers that would discourage people from imbibing alcohol. These included jugs with snakes crawling over them and, more important for our purposes, a wide range of pig flasks. In an 1869 article for a local newspaper, the brothers summed up their feelings this way: “It is rather a hoggish propensity to be guzzling whiskey, and if the habit is indulged in, will soon reduce a man below the level of the hog and cause him to wallow in the gutter.”

In addition, drinking from the rear of the pig was assumed to be disgusting. The first flask shown here purports to provide a “railroad and river guide” on its body but also extols “a good little old Bourbon,” that it apparently contained. The wording may indicate a certain ambivalence, or perhaps sarcasm, on the part of the Kirkpatricks,

Today Anna Pottery jugs and flasks are among the most valuable American pottery bottles. They never fail to elect considerable attention whenever they are displayed and usually sell for multiple thousands. The first pig flask shown here recently sold for $23,000. The second flask also is from Anna Pottery, again showing rail and water routes., Despite displaying kiln burns, it sold for $12,000.

As for the Kirkpatrick Brothers , Cornwall died in 1890 and Wallace in 1896, spelling the end of Anna Pottery. Thus, neither saw the passage of the 18th Amendment to the Constitution that brought National Prohibition for which both men had campaigned with so much vigor and imagination.

Although Anna Pottery’s pig flasks command top prices, others produced similar containers both before and after the Kilpatricks--but with very different motives. Considered emblems of prosperity at the end of the 19th Century, pigs ate corn, the same grain from which whiskey was made. Moreover, pigs generally were considered “cute.” Seizing on porcine popularity and presumed appropriateness, distillers issued pig figurals as a marketing gimmick.

Among them were the honey brown flask advertising Lancaster Whiskey from Bardstown, a major whiskey-making town in central Kentucky. Pigs could get political, as demonstrated by this Albany slip covered hog advertising the 1880 candidacy of Grover Cleveland, two time President of the United States. This item sold recently for $1,725.

Pottery pigs are not the only one inviting swigs. Glass examples abound as well. The dark amber Berkshire Bitters bottle was the product of Amann & Company from Cincinnati, Ohio, founded by Anthony and Edmund Amann in 1869. It was appropriate for them to put their highly alcoholic bitters in a pig bottle since Berkshire is a well-known breed of swine. Boars can weight up to 750 pounds. Suffolk Bitters similarly featured a pig flask, green and embossed “Life Preserver.”

The Theodore Netter Distilling Company of Philadelphia offered a swallow of whiskey in a clear glass pig bottle given away to customers. Having left a partnership with two other brothers, in 1898 Theodore set up his whiskey business with wife, Hilda. With success they also opened branches in Chicago and Cincinnati but finally succumbed to Prohibition and closed in 1920. Netter’s oinker was a practical item: Once the contents were emptied it was meant to be filled with sand and used as a paperweight.
Posted by Jack Sullivan at 4:16 PM