Whiskey at Sea: The Economics 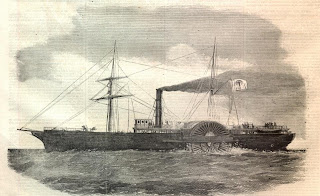 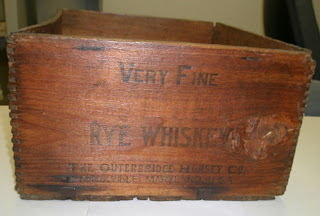 About 1865 the scion of a wealthy and politically connected family who bore the improbable name of Outerbridge Horsey returned from from four years in Europe, having avoided service in the Civil War, to rebuild his whiskey distillery in Burkittsville, Maryland, at the foot of the Blue Ridge Mountains.

Young Horsey brought home with him the idea that sloshing around inside barrels on the high seas mellowed and aged whiskey in beneficial ways that sedentary storing in warehouses failed to do. Scotch distilleries were accustomed to aging their product on long sea voyages to the U.S. and beyond. A few American distillers occasionally sent their whiskey into the Caribbean and back.

But Outerbridge, who aimed at producing the highest quality whiskey, went further than anyone else. Carried on oceangoing steamships, Horsey Rye was shipped down the East Coast of the United States, traveled the length of Latin America, rounded Cape Horn (remember, no Panama Canal at that time), headed up the Pacific Coast of the Southern Continent, cruised past Mexico, and finally docked in San Francisco weeks later. Then by railroad the barrels were transported across the length of the United States back to Maryland where the whiskey was decanted into bottles.

Horsey marked his crates, like the one shown here, with the message: “This whiskey was shipped by sea to San Francisco per S.S. ______, thus acquiring a unique and most agreeable softness.” If it was a gimmick, it worked. As Jim Bready, the guru of Maryland distilling, has put it: “For many years, this funny name whiskey from an obscure coil somewhere in the outback, this hundred-proof Maryland marvel, ‘rich in all the qualities that epicures require,’ had a Massachusetts-to-California clientele--at hotels and clubs, not corner saloons.”

For a long time the economics of this situation escaped me. How could it possibly have been profitable to Horsey to send his whiskey around two continents only to have it return to the exact place where it was made before bottling and selling it? Some Internet research has helped provide an answer.

First, not all of Horsey’s whiskey came home. Some was sold in San Francisco. An 1897 San Francisco guidebook subtitled “Good Things to Eat and Drink and Where to Get Them” touted Horsey Rye to local residents and told them the saloons where it could be purchased. Horsey also featured a second brand called “Golden Gate Rye” that also may have been sold in California.

Second, and more important, the economics of the time did not make the long sea journey all that expensive. For example, The New York Times reported in August 1903 that: “Distillers have found that it costs less to send whiskey to Bremen and Hamburg and ship it from there by way of Cape Horn than it costs to send it from Louisville to San Francisco by rail.”

Statistics provided at an 1887 Interstate Commerce Commission hearing back up that astonishing claim. A distiller documented to the ICC that a barrel of whiskey could be sent from the Port of Baltimore around the Horn to San Francisco for about $1 a barrel. That was five times cheaper than shipping a barrel cross country by freight train.

Horsey’s round trip expenses, when divided into 40 gallons of whiskey per barrel, add up to an around-the-Horn transit cost to San Francisco of only about 3 cents per gallon. To send the shipment back by rail to Baltimore was an additional 7 cents a gallon, for a total transit expense of 10 cents. That makes the cost for each quart bottle only 2.5 cents.

Whiskey in the late 1800s and early 1900s, as today, varied significantly in price. Although Jack Daniels at 18-years-old went for a pricey $2.50 a quart, perfectly respectable whiskey could be had for $1.00. I have not seen a quote on Horsey Rye but as a quality product, we can guess it sold for about $1.75 a quart. If that price is accurate, then sending Horsey Rye around the Horn added only 1.4% to its total cost. Well worth it, we may agree with Outerbridge, if only for the bragging rights.
Posted by Jack Sullivan at 2:38 PM