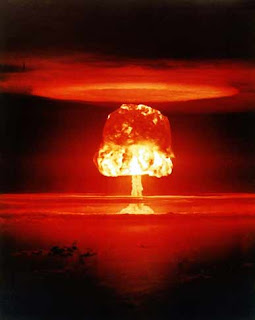 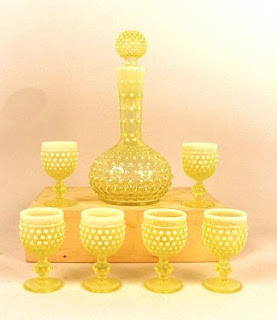 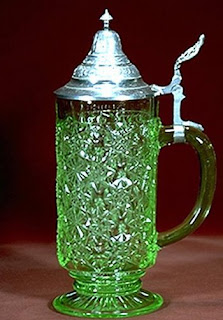 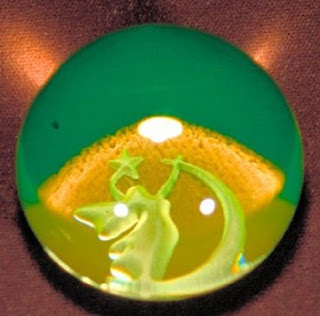 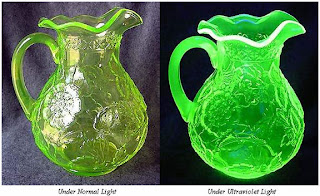 The picture of the nuclear explosion shown here reminds us of the ongoing struggle of countries like Iran and North Korea to join the “Nuclear Club.” A little known story of the effort to develop the first atomic bomb was the pivotal role played by American and British companies that specialized in making glassware with a yellow green hue that often are called “vaseline glass.”

The unique color of this glass, shown here in several examples, is imparted by the use of uranium oxide in the molten mixture. Employing uranium in glass goes back at least to 79 AD, the date of a mosaic containing yellow glass with 1% uranium found in a Roman villa on the Bay of Naples. Used through the ages, uranium in glass became particularly popular in the mid 19th Century with a peak period between 1880 and 1920.

American glass makers, such as the Fenton Glass Company of Williams, West Virginia, became primary suppliers to the U.S. market, turning out decanters, goblets, beer steins, and paperweights, all with a distinctive yellow green cast. The material, technically a glass-ceramic, acquired the name vaseline glass because of its reputed similar appearance to petroleum jelly.

Production ceased sharply with the outbreak of World War Two. In one of the most tightly held secrets in history, the United States embarked on a project to build a new and highly destructive explosive device, known popularly as the atomic bomb. Uranium oxide was a necessary component of this bomb and government agents began clandestinely to gather up supplies wherever they could be found. Factory managers were approached and told that the government was confiscating their uranium oxide. They were pledged to absolute secrecy on the pain of criminal prosecution.

The amount of uranium oxide obtained in this way has been highly classified, but the British, who followed Uncle Sam in collecting the material, have revealed that three tons were taken from just one of its glass factories. It is highly possible that some of the glass company supplies found their way into the two bombs dropped on Japan at Hiroshima and Nagasaki.

The ban on using uranium oxide in glass remained in force until 1958 when sufficient supplies of uranium were deemed available. By that time concern had arisen about the safety of the use of uranium to glass house workers and consumers. Less toxic depleted uranium dioxide was substituted. Because of tight regulations on its use and the expense of the ingredient, however, only a handful of glass houses have continued to produce vaseline glass.

Vaseline glass has continued to be popular with collectors. A sure way to tell if a particular item has a uranium content is to place it under ultraviolet light. As shown here by the side by side pitchers, the glass fluoresces bright green under the light. A highly sensitive Geiger counter will also detect the trace radiation, although most pieces of vaseline glass are considered to be only slightly radioactive and not harmful.
Posted by Jack Sullivan at 8:48 AM