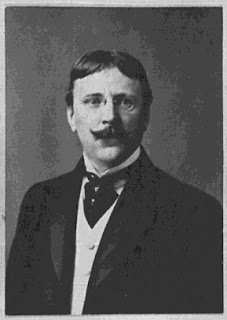 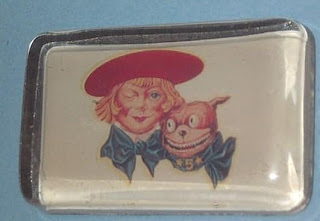 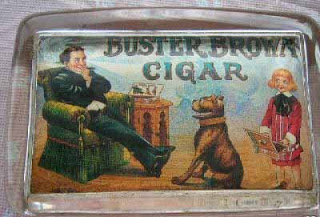 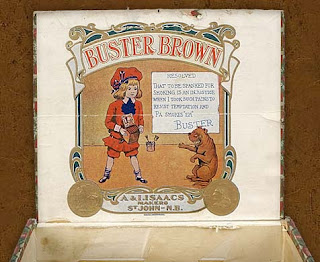 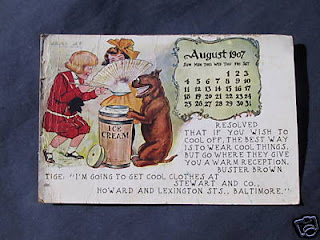 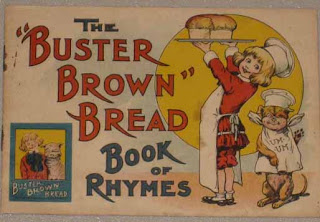 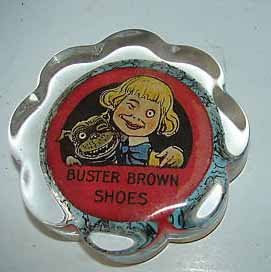 In 1904 an Ohio-born cartoonist went to the St. Louis World’s Fair where he hoped to sell the rights to a pair of comic page characters he had created. He came away having signed up an estimated 200 businesses eager to merchandise the images of a naughty boy named Buster Brown and his dog, Tige. More than a century later, we still have the pair with us.

The cartoonist was Richard Outcault (1863-1928), shown here. He is consider the father of the modern comic strip, having been the first to use multiple panels and speech balloons. For the the Hearst New York Journal in 1902, he introduced Buster Brown, a mischievous boy dressed Little Lord Fauntleroy style, with an odd-looking dog. The strip was an instant hit with kids and parents alike. “Buster was drawn to be marketed,” one writer has observed.

Given the sensibilities of our time, perhaps the most unusual product making use of the Buster Brown image was a Jacksonville, Florida, cigar company. The Buster Brown Cigar featured a picture of a man blowing smoke from his eyes and ears while Tige and Buster look on approvingly. This image appeared on cigar boxes, canisters, trade cards, cigar bands and, as shown here, even on paperweights.

A different, but no less startling message appeared on another Buster Brown cigar box lid. Shown here it depicts Buster offering a cigar to Tige who seems eager to take one. The text reads: Resolved: That to be spanked for smoking is an injustice when I took such pains to resist temptation and Pa smokes “em.” Hardly a statement 21st Century parents would be happy to read.

Buster and Tige also advertised for less controversial products. Among them were spices from the Forbes Tea and Coffee Company, clothes from Stewart & Co. of Baltimore, and Buster Brown Bread which used his image widely on a range of items. One of the bread company’s Buster Brown match holders recently sold for $355.

By far the most famous and successful company to exploit the Buster Brown image was the Brown Shoe Company, which had been founded 25 years earlier in St. Louis by George Warren Brown. For the princely sum of $200 he bought the right to market Buster and Tige and never looked back. Brown Shoe made marketing history in 1905 when it sent on the road a series of actors, each dressed as Buster and accompanied by a Tige-imitating dog. These troupes roamed the entire United States selling Buster Brown shoes as they performed in theaters, department stores and shoe stores. In those pre-TV days, such a touring show could bring out a whole town. Shoe sales soared.

In ensuing years Buster Brown became a nationally advertised figure, was featured in movie shorts, on radio, and on television -- selling shoes. By 1958 the Buster Brown line had become largest brand of footwear for children. Today the company’s annual revenues are about $2.4 billion. Clearly Buster Brown must be considered one of advertising’s most successful icons, having survived more than a full century. Through the years the Brown Shoe Company has updated the image of this “good little bad boy” and his faithful canine, but the final product is always true to the concept Richard Outcault invented and sold so capably.
Posted by Jack Sullivan at 2:19 PM