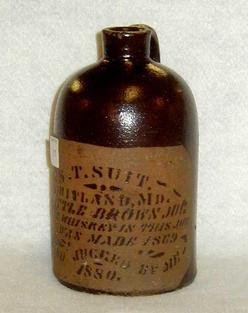 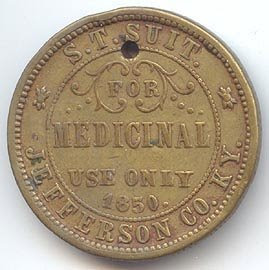 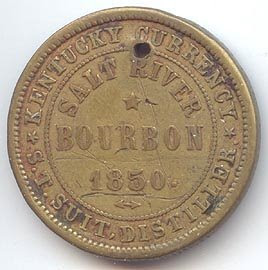 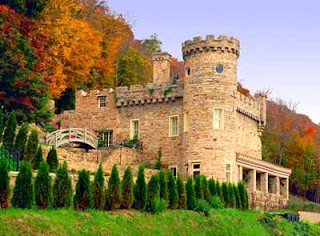 Of all the whiskey men about whom I have written, Samuel Taylor Suit is among the most interesting. Friend of Presidents, Kentucky colonel, founder of a town that still bears his name, titan of industry, three times a husband, castle-builder --

Shown here as a young man, Suit was born in Maryland in 1832. He ran away from home and headed West when he was just 15. About 1857 he began working at a distillery in Louisville, Kentucky. The young go-getter apparently had an aptitude for the business because by 1869 he had bought and was running his own distillery in Louisville. But Suit was destined to return to his native Maryland. In April 1867 he bought 300 acres of land just outside the borders of Washington, D.C., and called it Suitland, now a town of 27,000. There he began to manufacture whiskey and other alcoholic products.

Many details about Suit’s early life have remained murky. Recently a metal token, shown here, has come to light that sheds some new light on him. His Kentucky brand was Salt River Bourbon, an early good whiskey. He also was conscious of the Prohibitionist movement early on, touting his bourbon as “For Medicinal Use Only.” Although the token describes itself as “currency” it probably was meant as a pocket lucky piece. The hole appears to have been applied later to use as a key chain.

The token led me to poke further into Suit’s early activities. The Filson Institute, a Kentucky-based organization that specializes in the state’s whiskey industry, recently disclosed that in 1872 Suit attempted to corner the Kentucky whiskey market by commissioning a local firm to buy up all the old bourbon it could secure. He then began construction of a warehouse in downtown Louisville to hold it. During construction, the structure collapsed internally. Four days later its side walls fell during a wind storm. Suit persevered, however. The structure was strengthened and rebuilt as the largest whiskey warehouse in town.

Suit’s scheme to achieve monopoly control of Kentucky bourbon failed during the Panic of 1873, but it put Louisville on the fine-whisky map, accord to the Filson experts. This failure -- and the death of his first wife -- may explain why he retreated East and eventually to Maryland for the rest of his colorful life, a life that I have recounted elsewhere in articles available on the Internet. The continuing legacies of S.T. Suit are the “Little Brown Jugs” in which he bottled his Maryland whiskey and the castle he built for his third wife -- 25 years his junior -- not long before his death in 1888. The castle continues to be a popular tourist attraction in Berkeley Springs, West Virginia.
Posted by Jack Sullivan at 5:01 AM