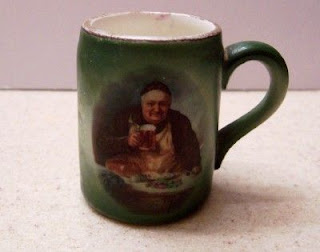 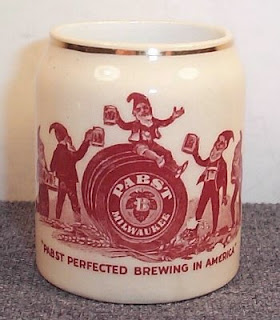 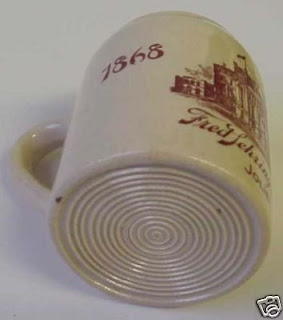 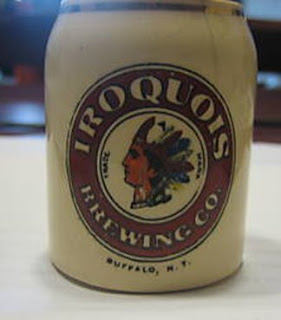 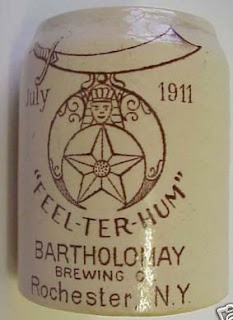 Some of the more unusual advertising giveaways of the late 19th and early 20th Century were small ceramic items shaped like beer mugs with handles and circular serrated bases. They could be used to store and then strike safety tipped matches. Approximately 2 and 1/8th inches high and 1 and 3/4 inches at the base, today they are avidly sought by collectors. A Scottdale, Arizona, man, for example, has accumulated more than 60.

Although a wide range of businesses issued mini-mugs, including pottery and glass companies, they were a natural for breweries. The tiny cup advertising beer presumably could trigger a thirst for the same brew in a larger drinking vessel. The first example shown here is of a monk ready to quaff a glass of beer. It replicates the pictures that triggered the first post of this blog (April 29, 2009) under the title “New Finds.”

This mini-mug confirms the thesis that items with this transfer originated with the Theumler Manufacturing Co. of Pittsburgh and Rochester, Pennsylvania. Theumler appears to have been a major creator of mini-mugs. It also made the Pabst Beer mini-mug showing Old World gnomes drinking beer around a barrel of the brew that “Made Milwaukee Famous,” and the 1904 example from the Sehring Brewing organization of Joliet, Illinois, a family-owned business that survived from 1868 until Prohibition. The picture of the Sehring mug shows the ribbed base that allowed matches to be struck.

Theumler almost certainly made the Iroquois Brewing mini shown here. The company’s characteristic mark appears on the Buffalo brewery’s larger beer mugs of the time. As noted before, Theumler was not a ceramics manufacturer. It bought base stock from regional potters and then its decorators went to work supplying the designs requested by its customers. Iroquois Brewery existed in Western New York State from 1892 to 1971.

The final example, for the Bartholomay Brewing Co. of Rochester, New York, is from Germany and dated 1911. Although the Theumler firm decorated Bartholomay’s normal sized mugs during the early part of the 1900s, after owner Hugo Theumler died in 1909, his company ceased operation almost immediately. As a result, in 1911 Bartholomay was forced to import this mini-mug from Germany where Hugo originally had learned the trade. The item was issued for a Shriner’s Convention in Rochester, known as “Feel-Ter-Hum.” The brewery itself closed in 1934 after 82 years in operation.