Over time I have collected the images of a number of paperweights that are out of the ordinary in the illustrations they bear, the messages they impart, or their utility as advertising devices.   Having amassed eleven of them, it is now time to present them to the public. 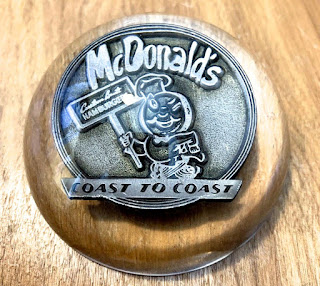 Some of really goofy weights provide humanoid heads from unlikely materials.  The first, shown here, was the first MacDonald’s advertising mascot called “Speedy.”  Speedy was a little chef figure that had a hamburger for a face.  The idea, I suppose, was to emphasize the fast service provided by the California based chain and that hamburgers were its stock in trade.   The company dumped Speedy in 1962 in favor a clown figure named “Ronald McDonald.”  Good move. 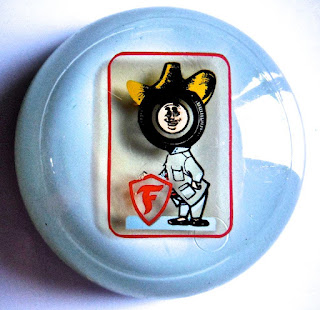 Even more bizarre is a paperweight that provided by the Firestone Rubber Company.  It depicts the figure of a man wearing a jacket, shoes and a ten gallon hat whose face grins out at us enclosed in a head that is a tire.  If this was Firestone’s attempt at a creating a mascot like Reddy Kilowatt,  the concept falls flat (pun intended).  Searching the Internet for more information on this creature I find nothing.  Tirehead may be one of a kind. 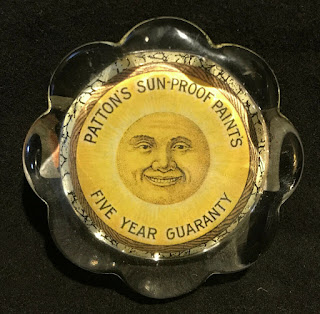 Everyone has seen the man in the moon.   Not able to look directly into the sun, we apparently have missed the “man in the sun,”  a smiling human-like face flaring from a yellow disc.   This was the advertising symbol of Patton’s Sun-Proof  Paints, the product of a paint and varnish manufacturer in Milwaukee, Wisconsin. The company claimed that adding silica to the lead and zinc in its outdoor paints warded off weather effects that cause other paints to flake off.  Patton paints were “Sold at the Sign of the Sun.” 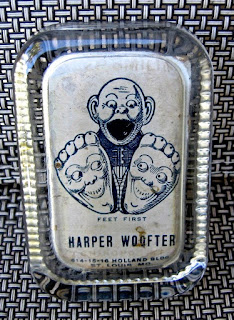 Dr. Harper Woofter — his real name —was a St. Louis based podiatrist with a penchant for the truly weird.  His paperweight shows a stubby little bald chap who is, as the British say, “gobsmacked,” (astonished) that each of his feet has developed a smiling face and are looking at each other in amusement.  The motto below is an enigmatic “Feet First.”  The image of faces on feet strikes me as truly odd in addition to making it difficult to walk. 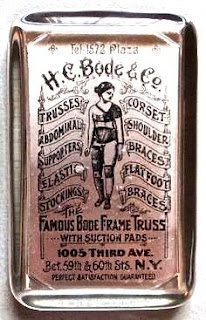 Paperweights that show full figures of people also can be unusual. Here is an advertisement for H.C. Bode &Co., producer of the “Famous Bode Frame Truss.” The company was located on Third Avenue, between 59th and 60th Streets in New York City.  Their weight provides an image of a young woman strapped into a variety of trusses, corsets, stockings, and braces — to the extent that one wonders:  1) what disaster might have befallen her and 2) how can she walk at all with so much armor on. 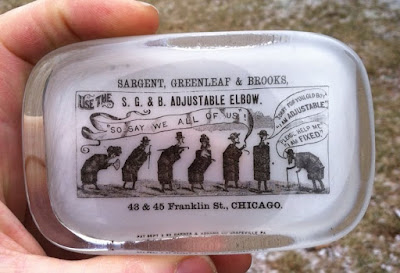 A real drama is going on in this weight, featuring a cast of anthropomorphized elbow joints.  An aged joint with two canes has met a group of his fellow tin types and cries out:  “Please help me, I’m fixed.”  The immediate response from the leader is a calloused:  “Sorry for you, old boy, I am adjustable.”  He is followed by five other elbows in various postures and a banner sayng “So say we all of us.”
The adjustable elbows were the product of the Sargent, Greenleaf & Brooks Company, based in Chicago. 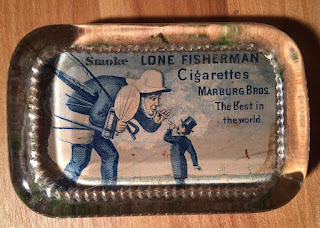 It was a surprise to learn that in the 1870s the Marburg Brothers & Company of Baltimore was one of the “Big Six” of the American cigarette industry.  The firm is said to have aimed at post-Civil War elites of America with high-end brands.  Among them was “Lone Fisherman Cigarettes.”  Company advertising featured a huge fisherman getting a light from a much smaller man.  Or is it a normal sized fisherman lighting a cigarette for Tom Thumb?  In either case, strange. 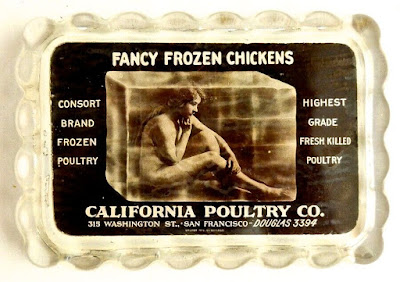 No more perplexing, however, than the weight from the California Poultry Co. of San Francisco.  It features a young woman sans clothing seemingly sitting in deep in thought, presumably inside a cube of ice.  The overhead title reads:  “Fancy Frozen Chickens.”  Is the idea that we are to considered the lass as equivalent to a young chicken?  In today’s radical feminist environment such an image would immediately spark outrage as “politically incorrect.” 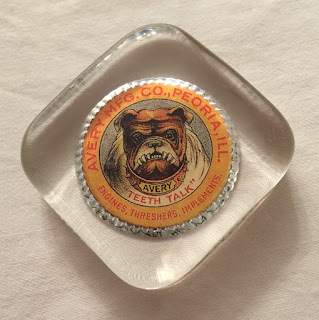 Chickens help us pivot from humans to animals on paperweights.  The Avery Manufacturing Co., of Peoria, Illinois, wanted to impress on the public that “teeth talk.”   For their advertising symbol what could be better than a bulldog with an overbite? This one is severely deformed.  Rather than simply one canine tooth showing on each side of the mouth as per the real bulldog, this one has been given a total of six.  All the better, I suppose, to emphasize the tearing power of its Avery’s threshers and other farm implements. When Mark Twain penned the lines:  “Work like you don’t need the money, dance like no one is watching, and love like you’ve never been hurt,” he likely never imagined they would appear on a paperweight with an illustration of four high-stepping pigs.  Since no other attribution appears on the item, we can assume that it was not an advertising give-away as other paperweights on this page but likely sold in a gift shop. 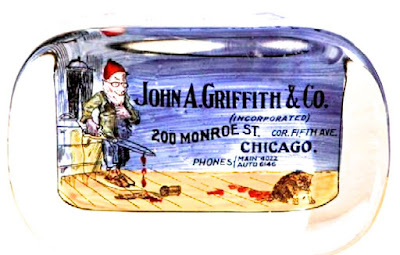 The gaiety above contrasts sharply with the somewhat gruesome scene of a man who apparently has just cut off the tail of a cat with a giant shears and is laughing about the deed.  It was issued by John A. Griffith & Co.,Inc., of Chicago.  Its business was “tailor’s trimmings,” i.e., anything that can be used to ornament clothing.  Griffith, a pioneer in the field, mass produced decorations using machine weaving techniques that put trimmings into the reach of small professional dressmakers and home sewers.   This explanation, however, fails to decipher the image on the weight.  Perhaps Griffith just didn’t like cats.

Posted by Jack Sullivan at 5:34 AM