Repeal of National Prohibition — The Artifacts

Since the beginning of the Republic only 27 amendments have been adopted to the Constitution of the United States, ten of them almost immediately.   Only one amendment, the 18th, has ever been repealed.  That one imposed a ban on making or selling alcoholic beverages anywhere in the country.  For the next 14 years a drumbeat arose for “Repeal,” fueled by bootlegging, spikes in crime, and the economic woes of the Great Depression.  The progression toward ending the ban on liquor can be tracked through a series of artifacts. 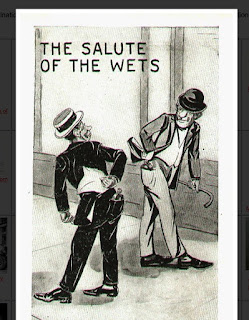 The first is a license plate, meant for the front of cars in states requiring only a rear plate as many did.  It makes no pretense at subtlety, shouting in black on yellow:  “Repeal the 18th Amendment.”  Less blatant were an entire range of postcards that made a mockery of the attempt Americans from drinking.  Hip flasks were a familiar fashion statement of the 1920s, though seldom did the wearer show his off, fearful a viewer might want a snort.

The Presidential candidacy of Al Smith, a popular governor of New York and a confirmed “wet” sparked hope in many hearts that his election would mark a turning point in the battle against the prohibitionists.  The political button shown here is one of my favorite artifacts — humorous but to the point.  Even though the Democratic Party embraced Repeal, Smith’s New York accent and Catholic faith turned off voters and Herbert Hoover won handily.  Hoover embraced the 18th Amendment calling it “The Great Experiment.” 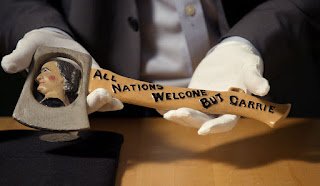 Carry Nation, the axe-swinging prohibitionist from Kansas who regularly took chunks of wood out of saloon bars was made a symbol of ridicule as an out of control fanatic.  An eating establishment might display a hatchet like the one here to remind customers of the destructive conduct that had accompanied the so-called “temperance” forces. 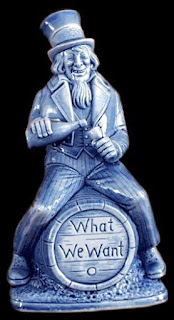 Before Prohibition a German ceramics-maker called Schafer & Vater had a line of figural bottles that several U.S. distillers made use of as “nips,” holding several swallows of whiskey and often given away.   When that business ended, the German partners, showing a sense of humor, issued a series of bottles featuring Uncle Sam pouring himself a drink while sitting on a barrel incised “What We Want.” 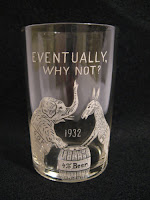 By 1932 it was becoming clear that the days of National Prohibition were numbered.  A beer glass etched with the Republican elephant and the Democratic donkey, both resting on a beer barrel, asked the question:  “Eventually, Why Not…1932”  The glass may have anticipated the election of Franklin Delano Roosevelt, who had been Governor of New York.  Roosevelt’s theme was “Happy Days Are Here Again,” captured in a Repeal-oriented fish bowl.  Perhaps that is why a large goblet of beer became known as a “fish bowl.” 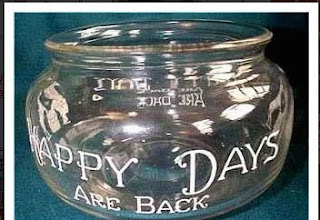 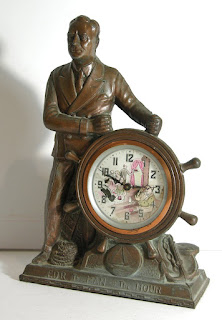 With Roosevelt’s landslide win over Hoover in 1932, hopes for a quick end to Prohibition triggered a number of artifacts.  Here is a clock that is configured to look like the helm of ship.  It is being manned by a standing figure of the President who is characterized as “FDR - The Man of the Hour.”  If one looks closely at the color picture on the clock dial, it depicts a bartender with a martini shaker and customers drinking cocktails.   Clear inference:  The clock is ticking toward the end of “dry.”  The placard shown below urged Americans to “Help the President with Law Enforcement” and repeal the 18th Amendment. 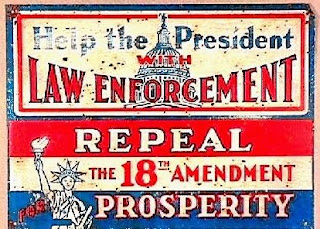 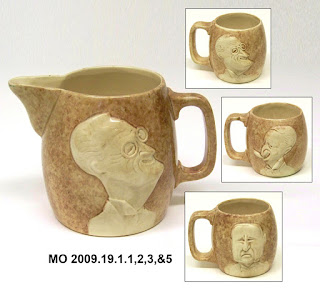 When Repeal finally was achieved in 1934, the occasion was saluted with a ceramic beer serving set that included a pitcher bearing a caricature of a jaunty President Roosevelt.  Three beer mugs completed the set from Stangl Pottery Company of Flemington, N.J.  The mugs featured  Roosevelt, Al Smith (center) and Democratic Party chairman, Jim Farley. 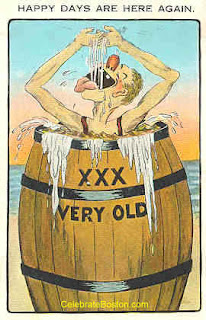 Finally, 1935 brought new kind of postcard to the fore, cards celebrating Repeal with comic images.  Among them were illustrations that depicted individuals celebrating by jumping into barrels of whiskey.  Several of these were featured on this blog in my post of April 26, 2013.  Here is an example that shows a gent inside a barrel of “very old” whiskey, drinking greedily of its contents.  Once again Roosevelt’s theme song sets the theme.

From the imposition of the 18th Amendment to its disposition by the 21st had taken 14 years, a relatively short time in the context of history.  During that interregnum a great many changes occurred in America, events that have spawned hundreds of books.  I have yet to find one dedicated to Repeal, however, that so entertainingly describes the journey as the story told by these and similar artifacts.