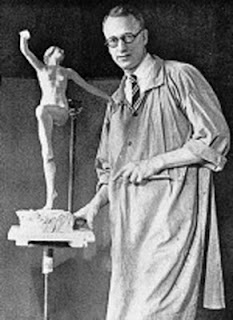 Last summer, while visiting in the Cleveland area, I was introduced to the Cowan Pottery Museum,  located in the Rocky River Public Library.  This full service library contains a collection of some 1,100 ceramic objects, many of them on display. They were inspired by one of Ohio’s most famous sculptors in clay,  Reginald Guy Cowan,  who founded his pottery almost one hundred years ago.

Known simply as “Guy” throughout his life,  Cowan was born in 1884 and raised in East Liverpool, Ohio,  known as “Pottery Capital of the World” for the many ceramics companies located there.  The Cowan family was steeped in the pottery trade.  After studying ceramics engineering in New York State,  Cowan moved to Cleveland in 1908 to teach ceramics and design at the East Technical High School.

About 1912 Cowan left teaching to open his own studio, located at Nicholson and Detroit Avenues in Lakewood, Ohio.  He called it the Cleveland Pottery and Tile Company.    Working with three kilns and a small staff, he designed and executed functional art pottery.   In 1917 recognition came to him in the form of the prestigious first prize in pottery in a show at the Chicago Art Institute.  Shortly thereafter, however, Cowan was forced to close his business when called to serve during World War One as a captain in the Chemical Warfare Service. 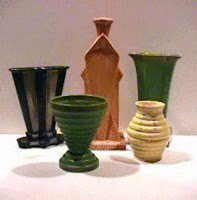 After the war Cowan returned to find that his Lakewood location had run out of natural gas to fire the kilns.  While he and his wife, Bertha, continued to live in Lakewood,  he moved his pottery operation to Lake Road in Rocky River.  He is shown there in the new studio that he called “Cowan Pottery.” That facility had nine 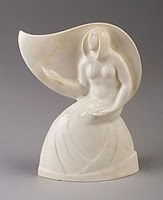 kilns and a small house on the property that became a showroom.  His designs were perfect for the times. The Art Deco movement was sweeping across America and the demand for the sinuous and stylish Cowan pieces found a ready market.

Cowan served up practical items like vases and sconces and a whole line of ceramic statuary featuring sweeping poses and highly discrete nudity. The years Cowan Pottery operated coincided with the start of another 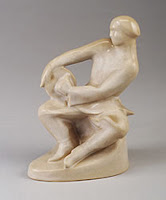 famous Cleveland tradition: the Cleveland Museum of Art's May Show, a juried exhibition of works by Northeast Ohio artists that included several categories of art.  Repeatedly pieces made by Cowan and his artists won medals. 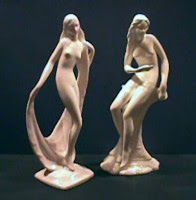 The company, however, did not rely on prizes for their merchandising.  As the studio prospered, Cowan formed a nationwide dealer network with an estimated 1,200 outlets.
They distributed pottery to such prestige stores as Marshall Field’s of Chicago,  Wanamaker’s of Philadelphia and Halle’s of Cleveland.  Prosperity allowed Cowan to diversify his designs by hiring some of the Nation’s best known artists in clay , a number of whom had been students at the Cleveland School of Art. They continued to keep Cowan Pottery a factor in the Art Deco movement and gained additional respect for the Rocky River studio. 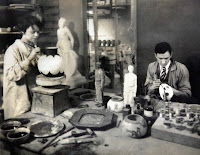 Despite its prizes, dealer outlets and talented artists,  Cowan pieces do not show up in the several reference books on American art pottery in my library.  Most books do not even mention the pottery.  My guess is that most of the Cowan production has been considered fairly pedestrian, made for the public taste of the time and rarely on the experimental or adventurist edge. 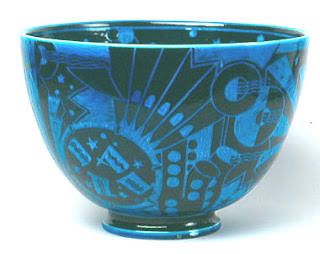 That said, three pieces by Cowan artists particularly caught my eye.  Considered perhaps the gem of the museum’s collection is a piece generally known as “The Jazz Bowl.” Shown here, it was made by Viktor Schreckengost.  Born and raised in Sebring, Ohio,  He was a student at the Cleveland School of Art when Cowan met him and recognized his talent. Sckreckenhorst reputedly created the bowl on an order from a New York housewife.  The object incorporates cocktail glasses and skyscrapers in jet-blue and Egyptian black in apparent homage to New Year’s Eve in the Big Apple.  It is definitely worth a look as another Schreckengost piece in the collection, a plate shown here entitled “Danse Moderne.” 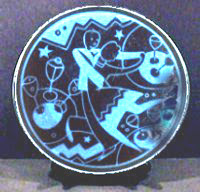 A third article of particular note, shown here, is a mural by one of the several female artists employed by Cowan, who was ahead of his time in employing women.  Displayed near the entrance of the library, this mural only recently has been restored.  It was created in 1930 by Elsa Vick Shaw, a Cowan artist and is called “Egyptian 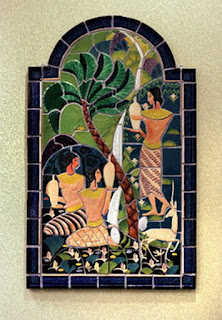 Maidens.  The vivid colors and graceful shapes make the sizable ceramic mural an impressive introduction to the collection.

Even as early as 1929 Cowan’s business began to suffer financially as competition to sell art pottery intensified.  The Stock Market crash and the onset of the Great Depression eventually spelled doom for his pottery as the public had no spare money for nonessentials.  The company went into bankruptcy in early 1931 and closed its doors for good in December of that year.  After the studio closed, Cowan spent the rest of his life as the chief designer for Syracuse China and a judge and trustee for the National Ceramic Exhibitions. He died of a heart attack while vacationing in Tucson, Arizona, in 1957 and is buried in Rocky River.

During the relatively brief existence of the firm, Guy Cowan and his artists had produced outstanding and technically advanced artifacts which brought them and American art pottery international recognition. Today the pottery’s pieces sell at auction anywhere from a few dollars to more than $10,000. The prices reflect a continuing respect by the public, if not by the experts, for Cowan’s output.   The Rocky River, Ohio, Public Library is the place to re-discover Guy Cowan's pottery and its works in clay.

Note:  The information for this post was derived from materials available from the Cowan Pottery Museum and from news stories that have appeared from time to time in the Cleveland Plain Dealer.