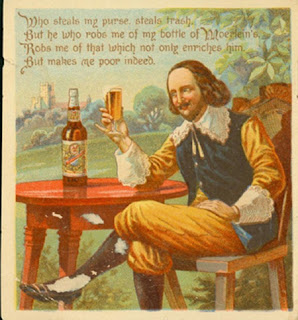 Shakespeare undoubtedly was the greatest dramatist in the English language or for that matter any language.  His plays are produced and acted worldwide every day.  Once years ago I saw a production of “Macbeth” done by Chinese students in Hong Kong.  Not understanding a single word, I left after the first act.  Shakespeare’s popularity has made him and his works natural fodder for the advertising world over many decades.  This post explores some of the merchandising in which the Bard been employed.

The first example is a antique trade card from the Christian Moerlein Company of Cincinnati, Ohio.  Moerlein was born in Truppack, Bavaria in 1818.  He emigrated to the United States in 1841 at the age of 24, settling in Cincinnati,  a favorite locale for people of Germanic heritage.  His initial occupation was as a blacksmith.

At some point during the late 1840s, Moerlein began brewing beer in the rear of his blacksmith’s shop,  selling it to friends and customers.  His brew proved so popular that it soon eclipsed his forge work.   A Cincinnati businessman offered to invest with him in founding an actual brewery.   Thus, in 1853 Moerlein and his partner established the Elm Street Brewery.   The enterprise was an almost immediate success.  Moerlein’s was the first American beer to meet the strict standards of the “Reinheitgebot,” the German beer purity law first decreed in 1516 by Duke Wilhelm IV.   Cincinnati beer drinkers, many of them of German descent,  appreciated the quality and became a solid customer base. 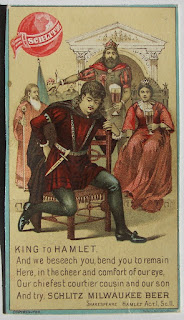 Those same German-Americans would have been fairly well educated and would understand a beer advertisement based on a Shakespearean theme.   Here in a 1900s trade card Moerlein shows the playwright himself enjoying a bottle of beer in a garden setting.   The brewer has severely altered a line from the play, “Othello,” in which the villain, Iago, is complaining about his good name being besmirched. 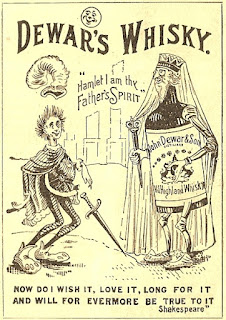 Schlitz Beer of Milwaukee also parodied Shakespeare in an early 20th Century trade card, this time making use of the familiar figure of Hamlet, Prince of Denmark.  This ad features a point in the play where the King, who has killed Hamlet’s father to gain the crown and additionally has married Hamlet’s mother, addresses the young prince.  Never in the play, however, are the king and queen seen holding foaming glasses of beer.

Hamlet frequently has been turned to advertising.  The vintage ad for Dewar’s Whiskey  is a send-up of the scene where the Danish prince confronts the ghost of his slain father on the battlements of the family castle.  In the play 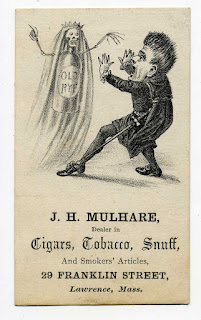 it is a tense and terrifying scene.   Here the king is a bottle of “Highland Whiskey” Scotch and Hamlet drops his sword in excitement at the sight.   I have been unable to locate the line below attributed to Shakespeare”  “Now do I wish it,  love it, long for it, and will for evermore be true to it.” It does not appear in Hamlet and may be the creation of the ad writer. 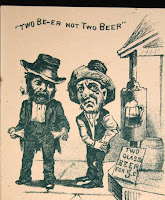 A second recreated scene from the battlements is more like the original.  Here Hamlet is faced with a bottle of “Old Rye” topped by a skull wearing a crown.   This may have been a pro-Prohibition screed from J. H. Mulhare of Lawrence, Mass.  Mulhare apparently  would much rather that customers smoked his cigars, chewed his tobacco, and sniffed his snuff than take a slug of 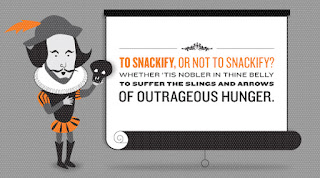 Hamlet’s famous soliloquy as he contemplates suicide, “To be or not to be, that is the question....” frequently has been altered for comic effect.   A cartoon from the 19th Century shows two down-and-out chaps trying to scrape up a nickel to buy two glasses of beer.   In a more contemporary ad, the Bard himself, holding a skull, asks the question: “To snackify, or not to snackify? 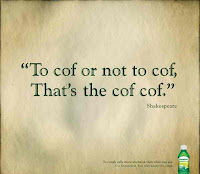 The next advertisement asks a similar question and attributes it to Shakespeare: “To cof or not to cof; That’s the cof cof.”  It is an ad for a nostrum called Transpulmin, said to be a complete treatment of cough and bronchial congestion, including:  “All types of irritant and convulsant cough of every genesis and degree of severity.”  The active ingredient in Transpulmin is “guaifenesina y pipacetato.”  It apparently is a Central American herbal. 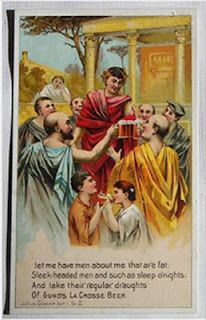 The next four Shakespeare ads are all from the early 1900s when beer companies vied with each other to win customers.   Several of them decided on the efficacy of issuing colorful trade cards that parodied the Bard.  We have already seen examples from Christian Moerlein and Joseph Schlitz Brewing.   Others came from the Gund Brewing Company of La Crosse, Wisconsin, and the Lemp Brewery of Saint Lewis.

The first is taken from “Julius Caesar.”  The lines parodied are spoken by Caesar to Mark Anthony about Cassius, a ringleader of his future assassination.  Earlier he has said of Cassius that “he has a lean and hungry look....”  The implication here is that if Caesar had only handed out Gund Beer to the Roman Senate, he might have survived. 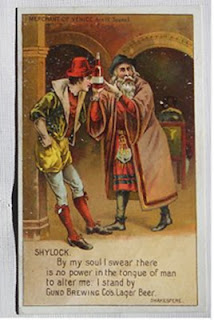 In August of 1854, John Gund, a German immigrant started a brewery in the log cabin he had built at the corner of Front and Division Streets in La Crosse, Wisconsin. It was a small operation, even for those days.  Over the years, as he continued expanding his brewery business, the John Gund Brewing Company was organized and incorporated on May 1, 1880, with one hundred thousand dollars capital. The amount of business being handled by the brewery increased steadily. Additions and improvements were made to the brewery so that by 1897, the complex covered five acres. In that year sixty thousand barrels of beer were brewed. Gund’s beer was shipped all over Wisconsin, Dakota, Iowa, Illinois, Minnesota, and Nebraska.  Gund’s Brewery was accounted the largest in the Upper Midwest outside of Milwaukee. 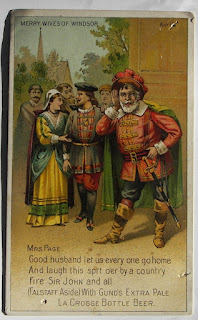 It may have been competition from other breweries like Schlitz and Pabst that impelled Gund to issue his own set of Shakespearean trade cards.   Another card replicated a scene from “The Merchant of Venice” in which the moneylender,  Shylock, is swearing that he will not relent in taking “a pound of flesh” from the hide of an aristocratic borrower who cannot repay.  Here Shylock’s oath is to stand by Gund Beer.   Sir John Falstaff shows up in several of Shakespeare’s plays.  A favorite of theater goers down through the ages, Falstaff was a hard drinking, big talking rascal.  Here he is shown in a scene from “The Merry Wives of Windsor,” where in a “stage whisper” he is promoting Gund’s Extra Pale La Crosse Bottle Beer. 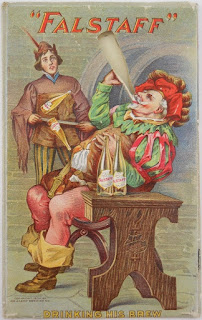 Given Falstaff’s drinking habits  it is perhaps natural that an American brewery would name a beer after him.  Johann Adam Lemp was born in 1798 in Eschwege, Germany, and two years after his arrival in the United States in 1836,  moved to St. Louis.  He sought to make his fortune by becoming a grocer; however he abandoned this dream when he realized his grocery store was more popular for its lager beer than for its groceries. In 1840, Lemp closed his grocery and opened a brewery and saloon.  During the 1840s, Lemp moved the brewery to a larger complex in south St. Louis and began training his son, William J. Lemp, to take over the operations.

After the elder Lemp died in 1862 William took over the brewery and purchased the property that would become the Lemp Brewery complex in 1864. This property at 3500 Lemp Avenue, still stands in St. Louis today.  The younger Lemp made Falstaff the flagship label of the brewery.  He issued a mechanical trade card showing Sir John guzzling beer from a bottle.  Empty now, at one time the bottle held a granular substance that trickled down to a bottle on the other side of the card, one being filled by a young boy.

These are just a few of the advertisements that have been hived out of the works of Shakespeare.  They span more than 100 years and involve some of the Bard’s best known plays, from tragedies like Othello and Hamlet to historical dramas like Julius Caesar and comedies like the Merry Wife of Windsor.    All have been grist for the merchandising mill.  From his grave in Westminster Abbey, I can imagine Shakespeare altering his own famous line about lawyers in Henry VI, Part 2.  It would become: “First let’s kill all the ad men.”