A Bit of Lubricity Helps the Medicine Go Down 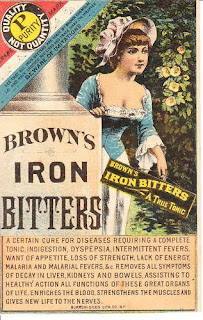 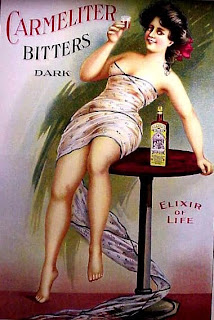 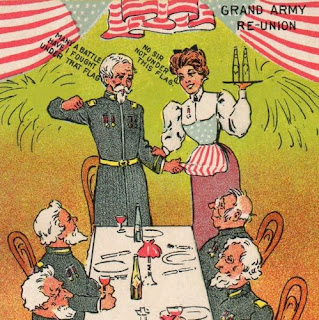 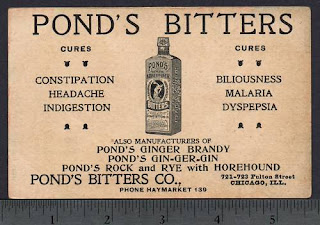 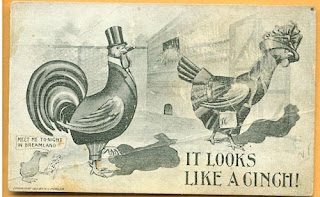 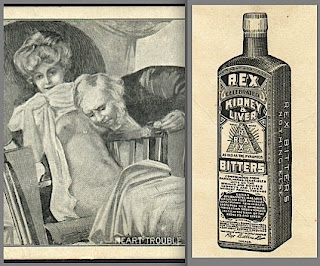 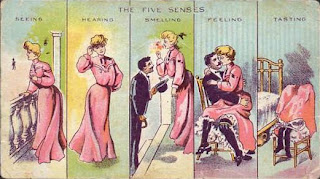 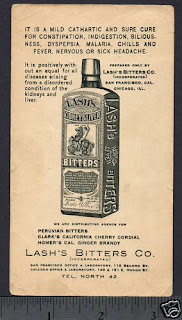 Out of a constant fascination with the advertising messages of the Victorian era, I have determined that the merchandising most likely to feature sexually titillating themes came from the peddlers of bitters. Bitters were mixtures of herbs, roots and tree bark laced with a generous amounts of alcohol that were sold as cures for a wide range of diseases and ailments. At some point the companies that produced them concluded, as many advertisers have today, that “sex sells.”

In that earlier era, 1880s-1900, one that many identify with puritanical mores, these medicine men often appear to have gotten away with lubricious images on their signs, ads, and trade cards that are startling even by today’s standards. We start with a relatively benign image from Brown’s Iron Bitters. It features a winsome young girl displaying a lovely -- and largely bare -- bosom.

More scandalous are the claims made for this product as a “sure cure” for such maladies as malaria, malarial fevers, and “decay in liver, kidneys and bowels.” A tall order for a tonic that likely carried as much alcohol as a bottle of gin and little else of therapeutic value. It was a product of the Brown Chemical Company of Baltimore, Maryland, which trademarked the potion about 1882 and began suing any other patent medicine with “iron” in its name. Ironically, the principal product of Brown Chemical was fertilizer.

The woman advertising Carmeliter Bitters not only is displaying considerable cleavage but has her skirt hitched up as she leans provocatively what appears to be a bar stool. This nostrum was advertised not only as “The Elixir of Life,” but as a remedy for “all kidney and liver complaints.” It was the product of Burhenne & Dorn who did business at 347 Hamburg Avenue in Brooklyn, New York.

A card memorializing a meeting of the the Grand Army of the Republic (GAR), representing Civil War soldiers was the occasion for Pond’s Bitters to tell a double entendre joke about fighting a battle under a flag, represented by an apron gracing a pretty waitress. As the flip side of the trade card discloses, Pond’s Bitters also included a long list of illnesses it cured, mostly stomach and intestinal ailments, but adding malaria.

The Chicago-based medicine peddler was a particular target of Samuel Hopkins Adams, the journalist whose exposes in Collier’s Magazine in 1905 led to the passage of the Pure Food and Drug Act. In the first of his series on “The Great American Fraud” Adams took aim at Pond’s for “trading on public alarm” by running an ad claiming to cure meningitis with one of its nostrums while New York was suffering an epidemic of the disease.

Rex Bitters was the source of two racy trade cards. One shows a rooster in formal dress trailing a similarly fancy costumed hen with the caption, “It looks like a cinch.”
At bottom left is a baby chick singing a popular song of the day: “Meet me tonight in dreamland.” The second Rex trade card leaves nothing to the imagination, showing a doctor leaning against the exposed breasts of a Gibson Girl. The caption “Heart Trouble” is, however, ambiguous as to which of the two figures it refers.

Rex Bitters, a Chicago-produced patent medicine, advertised itself as curing biliousness, malaria, chills and fever, neuralgia, constipation, pain in back, dyspepsia, sick headache, indigestion, sour stomach, and all “affections” of the kidneys and liver. Despite its obvious alcoholic content, the label advised customers to give children a teaspoonful twice a day and at bedtime “if required.” Rex Bitters merchandising emphasized that it had been recognized as a medicine by the Internal Revenue Department which had slapped a special tax on such products to help pay for the Spanish-American War.

The final example is from Lash’s Kidney & Liver Bitters, an outfit that claimed offices and laboratories in both Chicago and San Francisco. It is perhaps the most salacious of the group. Professing to demonstrate the use of the five senses, it portrays a tryst between an attractive, statuesque woman and and suave mustached visitor. The ending does not need further explanation.

Like the other bitters seen here, Lash’s claimed to be a “sure cure” for a wide range of illnesses including malaria --a seeming favorite among the patent medicine crowd -- and assured customers that it was “positively without equal for all diseases arising from a disordered condition of the kidneys and liver.”

In retrospect, if the bitters companies images seem scandalous, they did considerably less harm than did the bitters themselves. Adams, whose muckraking series of articles for Colliers Magazine helped achieve passage of the Pure Food and Drug Act of 1906, called these so-called “cures” a fraud on the public and even worse, “subtle poisons.” While the Act required a listing of ingredients on the labels of patent medicines, it did not outlaw claims to cure diseases.

The first head of the Food and Drug Administration, Dr. Harvey W. Wylie, in several public statements, however, soon made it known that potions claiming to be cures would be called on to prove those claims. Failure to do so could open them to prosecution for mail fraud. Almost overnight many professed cures were transformed into less aggressive remedies and tonics.