Looking Over a Four Leaf Clover 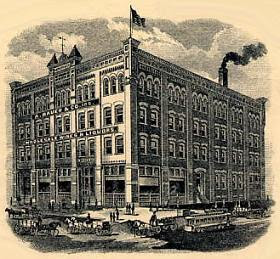 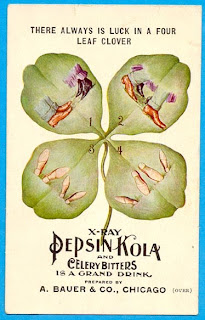 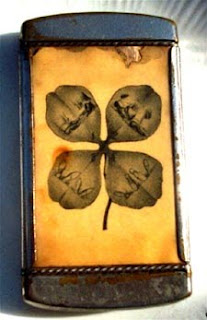 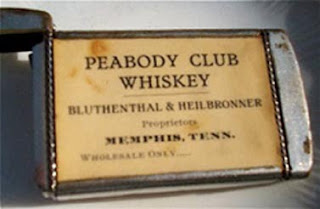 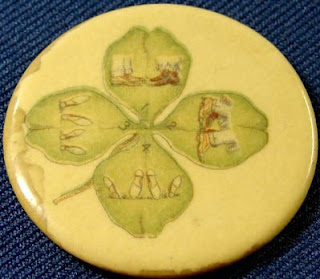 An old song begins: “I’m looking over a four leaf clover that I overlooked before....”
In keeping with my interest in icons (see the earlier Swastika posting) this piece is devoted to a four leaf clover that many people not only have overlooked, but never have seen. In the pre-Prohibition era it is a image that obviously caught the fancies of American whiskey dealers.

One was the A. Bauer Company of Chicago, in business from 1893 until 1918. The company, whose 142-148 Huron Street quarters are shown here, advertised themselves as importers and dealers in “fine cased liquors and wines.” It also featured a line of other alcohol-laced beverages, including its X-Ray Pepsin Cola and Celery Bitters. Bauer’s trade card for that product featured a somewhat unusual image with the double entendre caption: “There is always luck in a four leaf clover.”

Parsing the image on each lobe of Bauer’s four leaf clover advances a story. It is told in the shoes of a man in cuffed pants and woman in high-button shoes who meet in lobe #1, go off together in lobe #2, are lying separately, apparently in bed, in lobe #3, and -- mercy! -- what is happening in lobe #4?

Such a risque approach to merchandising alcoholic beverages was hardly unusual in the whiskey trade. Collectors of whiskiana can find plenty of signs, tip trays, trade cards and other items that feature nudity or men and women in suggestive situations.

The A. Bauer Company was not the ony whiskey company to use the naughty clover to sell booze. The same design shows up on a match case, or “vesta,” issued to advertise Peabody Club brand whiskey. This was the product of the company of Bluthenthal & Heibronner who were wholesale liquor dealers in Memphis, Tennessee.

This firm under several names is listed in Memphis business directories from 1896 to 1903, located at 373 Front Street. In addition to Peabody Club, the firm produced such brands as Deer Horn, John Hopkins Rye, Oak Forest, Osage Maryland Rye, Silverdale and Uncle Abe Gin.

Finally I have located a third use for the four leaf clover. It appears on the back of a hand mirror without obvious advertising, but probably from a third source. For a brief time an “assignation” on a four leaf clover had caught the public imagination -- or at least the drinking classes.
Posted by Jack Sullivan at 6:03 AM