Dickens in the Round 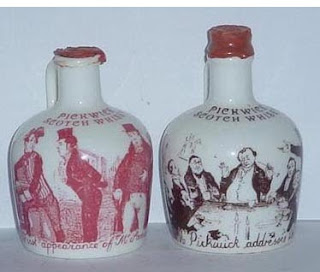 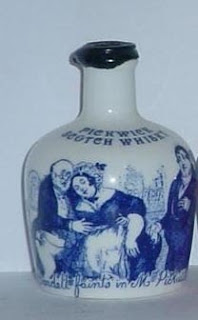 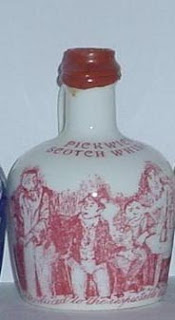 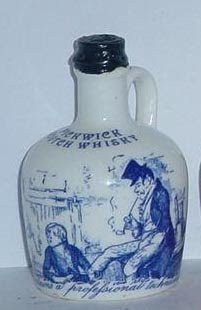 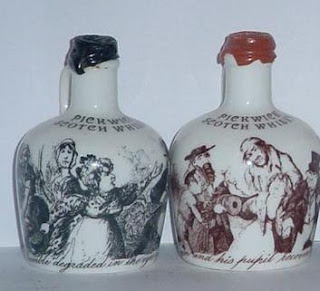 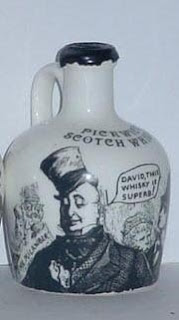 Charles Dickens (1812-1870) is for me, as for countless millions of readers during his lifetime and after, the world’s greatest novelist in the English -- or perhaps any other -- language. As a result, during my jug collecting days when I came upon a series of mini-jugs that portrayed Dickens characters, I sought them avidly and eventually acquired the entire series. While most of my jug collection was sold years ago, these items have been kept because of my special affection for Dickens and his stories.

The series was issued by Pick Wick Wines and Spirits Company of Derby, England, for its Pickwick brand scotch. The base of each mini indicates that the jugs were produced by the John Humphreys Pottery of Staffordshire England. It also contains a small portrait of King Edward the VII of England, a royal crown and tiny sketches of a distillery and a kiln. Although Edward’s reign was from 1901 to 1910, I date these mini-jugs from the 1950s.

The pictures on the jugs replicate -- or are similar to -- the illustrations that accompanied Dickens novels. They come in four different colors -- red, blue, brown and black -- on a milk white base of porcelain. Each transfer illustrates a particular scene or characters from Pickwick Papers (3), Oliver Twist (4), and David Copperfield (1). At the rear of each jug is a figure of Mr. Pickwick waving his hat and a tiny bottle of his scotch.

The Pickwick jugs, shown here first, illustrate three important scenes in the novel: when Pickwick first meets Sam Weller, who becomes his devoted servant and companion, Pickwick’s hilarious drunken oration to his club, and the scene when the widowed Mrs. Bardell, who seeks to marry him, pretends to faint in his arms.

Oliver Twist, being an altogether darker portrayal of humanity, is represented by scenes in which the orphan Oliver is introduced to Fagin, the ringleader of a gang of thieves, as Oliver is being instructed by gang members in the art of picking pockets; and as Nancy, Oliver’s true friend, is being interrogated prior to her murder by Bill Sykes. In a lighter vein is a fourth jug depicting the humiliation of Mr. Bumble, the heartless director of the orphanage where Oliver earlier had been sent.

Unlike the others, the David Copperfield mini does not show an actual scene from the novel. David is with his older, ne’er-do-well friend, Mr. Micawber, who is saying “David, this whiskey is superb!” This jug also comes in a multicolor transfer.

It is hard to put a value on these mini-jugs. Three decades ago I paid about $15 apiece for them. Since they currently almost never come up for sale on auction sites, pricing them is difficult. In any case their value is in the high quality of their transfers and in their celebration of the novels on which they are based.
Posted by Jack Sullivan at 8:32 AM