On the “Weighty” Track of John Deere

The very first motorized vehicle I ever drove was a farm tractor — a John Deere  similar to the one shown below — round the barnyard of my Grandfather’s farm when I was about eight years old.  My young uncle was at my side to prevent mishaps.  Since that time I have been fascinated by tractors.  Fortunately Deere & Company has recorded its history on a long line of paperweights that help tell its story. 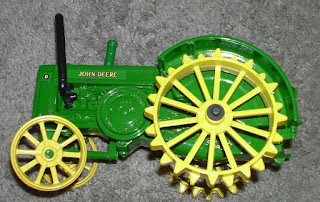 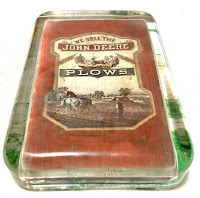 Company history began when Vermont-born John Deere, a master blacksmith, moved to the village of Grand Detour, Illinois, and began to craft pitchforks and shovels, along with a self-scouring steel plow in 1837.  Prior to Deere's invention, most farmers used iron or wooden plows to which the rich Midwestern soil stuck, so they had to be cleaned frequently.  In those early days, my grandfather plowed his Ohio 100 acres with a Deere plow, reins over his shoulder walking behind a horse.  The company issued a weight to memorialize of that pre-tractor period.

In 1918 Deere made a giant leap from plow and implement maker by buying the Waterloo (Iowa) Gas Engine Company and began to manufacture tractors.  At the time a crowded field of some 100 American companies were making and selling tractors. In that competitive environment Deere gained a reputation for vehicles that were relatively lightweight, reliable and less expensive.  Just as a winnowing process was going on in the automotive world, so with tractors.  By the end of the 1920s Deere & Company were prospering and soon to become one of the top three American tractor manufacturers.  Its models became known for yellow wheels, green body and a red seat. 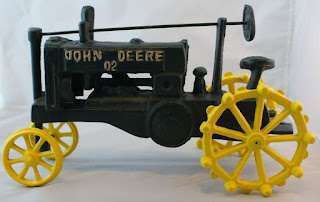 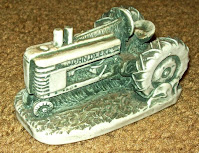 Fast forward to the 1930s.  Deere was going strong with its Model B, shown here in a marble weight, when the Great Depression caused many farmers to default on their implement loans.  According to company lore, no tractors or other Deere equipment were ever repossessed, a policy that likely benefitted the firm’s reputation with farmers.  Deere became synonymous with tractor.

With the outbreak of World War II, Deere & Company expanded.  In addition to a strong Government-backed demand for farm tractors, John Deere manufactured military tractors and transmissions for the M3 tank. It also made aircraft parts, ammunition, and mobile laundry units to support the war effort. During this period the Model H — the one I was “driving” — was dominant, introduced in 1939 and replaced post-war in 1947.  Shown below are two Model H weights. 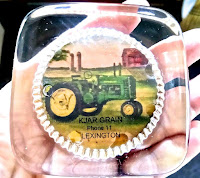 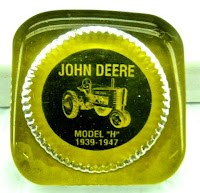 Fast forward again to 1980 and a weight that shows the kind of tractor required for the giant industrial farms of the present day.  While much of the body of the vehicle have remained unchanged since the past, the plain tractor seat has become an enclosed cab likely with a CD player and other comforts of home. 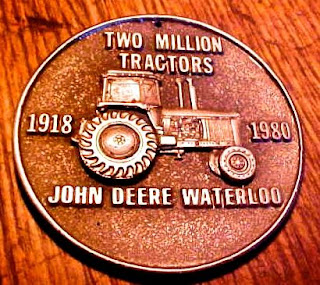 The same enclosed “cockpits” are in evidence on a 1992 paperweight, one that presents the Gen. II model and the 7000 series.  Note that the latter breaks from the traditional look of large wheels in the rear and smaller ones up front.  In recent years Deere, with headquarters in Moline, Illinois, has been the largest farm machinery company in the world, employing some 87,000 workers, half of them in the US and Canada.  The Waterloo Works, noted on the weights, provides power systems and engines. 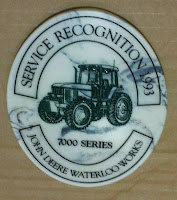 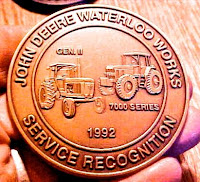 I end this post with a photo of the first tractor ever used on my Grandfather’s farm, taken around 1922. Given the precarious nature of the family finances, it likely was a used vehicle.  Possibly a Deere;  probably not.  At the wheel is my mother at about 15 years old and the family’s “designated driver.”  Having graduated to the tractor from driving a team of horses pulling a plow, no wonder she is smiling. 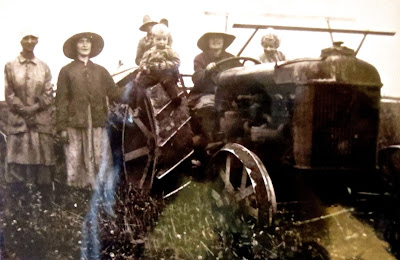 Posted by Jack Sullivan at 7:24 AM