The Joys of a Political Advance man

Foreword:  As the Presidential election season winds down, I was brought back in memory to an earlier time when I was a participant in those hi-jinks.  Here is one vivid remembrance.

After John Kennedy’s assassination in 1963, the 1964 Presidential election pitted Lyndon Johnson against Senator Barry Goldwater of Arizona.     My chance to meet Johnson came early that year when as Vice President he was preparing to make a speech in Milwaukee.   He called together the entire Wisconsin Democratic congressional delegation and their aides -- in an earlier day Johnson had been a staffer -- to discuss his visit.  In the course of the confab he went from person to person, asking their ideas.   When he got to me, unaccustomed as I was to advising Vice Presidents of the United States, I stammered that all the ideas that had been vetted earlier seem good to me.  Johnson passed on quickly, clearly convinced that Congressman Zablocki’s aide likely was retarded.

Nevertheless, the Johnson Presidential campaign in 1964 saw fit to call on me.   Local politicos without serious races, like Zablocki, were asked to second their people to help elect the Texan.  I was offered up and made part of the advance group on Lyndon’s campaign stop in Milwaukee.   Two jobs were assigned:  I was named “Bands Chairman” with the responsibility for lining up local high school marching bands to be stationed at strategic points along the President’s motorcade route from Billy Mitchell Field to Kosciuzko Park on Milwaukee’s South Side, a distance of 7.5 miles.   They were to be kept playing suitable patriotic airs for the waiting throngs.

My second assignment was to arrange a place for the President to urinate before going to the podium.  That proved more difficult since the ordinary construction site john was deemed 1) too ignominious for the Commander in Chief of the Free World, and 2) too tempting for the commoners to employ as their own bladders dictated.  Instead I rented a small oval house trailer that featured a bathroom and stationed it strategically behind the speaker’s platform.  A staffer from the Mayor’s Office, George Simos, was enlisted to intercept Johnson as he stepped from his limo and direct him to the trailer. 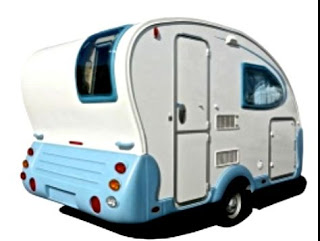 On the day of the President’s visit,  two large banners announcing “Bands Chairman” were affixed to each side of my small Ford and I was sent forth to make sure sweet music entertained the crowds.  On my first pass I found bands on corners a block off the route or barely assembled.  One was playing “The Eyes of Texas” out of tune.  The President’s plane was more than an hour late.

On my second pass, not knowing whether Johnson was five minutes or five hours behind me (no cell phones in those days),  I drove around a corner onto the route.  All cars had been cleared off for blocks ahead.  Thousands of onlookers turned as one in anticipation.  A cheer echoed and reechoed.  I waved feebly.

Once back at the park it was clear that, having landed,  Johnson was in no hurry to get to the rostrum.  Along the route he stopped to talk to onlookers and even dropped into a grocery store.  He brought a large salami, hacked off pieces with his pen knife, wolfed it down, and threw the rind out the car window.  (We feared the next day headline:  “Lyndon the Litter Bug.”) 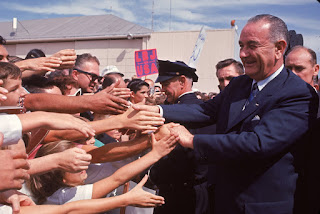 When the President finally arrived, George signaled as delicately as possible to the waiting rest station.  Johnson ignored him.   After his speech he hustled back to his car -- once again ignoring George and the potty stop.  I noted to George later that it was a shame we had spent so much money on the toilet and it had not been used. “I used it,”  he volunteered.

I was shocked:  “What if Johnson had walked in just at that moment?”

“I would have said, ‘Be through in a minute, Mr. President.’”

Postscript:  Spear carriers in politics also are fair game for unpaid bills.  They started rolling in, addressed to me, a week after the event -- for the trailer, sound system, the overweight Polish lady who sang the Star Spangled Banner.  I sweated. It took some fancy footwork but eventually the Democratic Mayor declared the occasion a “civic welcome” and City coffers were tapped instead of mine.

Posted by Jack Sullivan at 6:26 AM