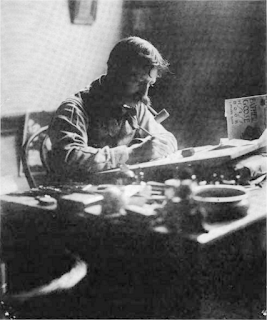 After the Civil War, a radical shift in artistically depicting vistas emerged, with farmscapes, landscapes, cityscapes and buildings often were shown from a bird-eye perspective, as one observer has put it, “rendered with maplike precision.”  Currently experiencing a revival of attention in the art world, such drawings often were done by itinerant self-taught American artists.  W. W. Denslow, shown above, was by contrast an accomplished artist, best known for his later illustrations for “The Wizard of Oz.”  Nonetheless, Denslow adopted the simplistic technique to accomplish a series of 100 plus lithographs of more than passing interest.

In 1876 Denslow was hired to provide a portfolio of sketches for the centennial celebrations held on the Fourth of July at Chambersburg, Franklin County, Pennsylvania.  The author, I. H. M’Cauley,  wrote a brief history of the region and provided information on each sketch, barely mentioning the artist.  Nevertheless, still struggling to make a living from his drawing, Denslow likely was happy for the commission although it must have consumed considerable time visiting and recording the sites.  My assumption is that the artist could profit additionally from individual sales of the lithographs. 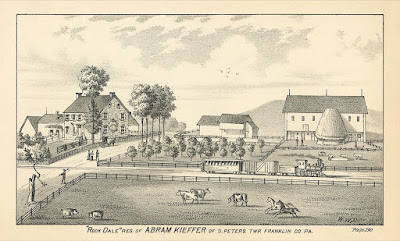 For example, I would assume that Adam Kieffer of “Rock Dale” outside St. Peters, Pennsylvania, would have purchased at least one picture of his domain.
The farm in exquisite detail is shown in prosperity, with a three-story stone house, a large barn with an ample hay stack, a thriving orchard, and pictures of hogs, cows and horses.  The surprise feature is a railroad train running right through Kieffer’s spread, towing both a boxcar and a passenger car. 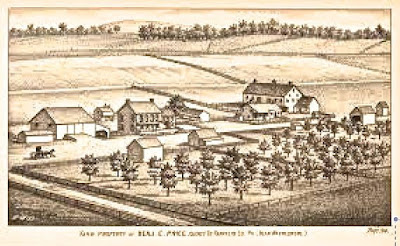 The Price farm above appears even more well-to-do, with two sizable barns in view and a variety of outbuildings.  Here the emphasis was on the large orchards on one side and the fields of grain on the other.  Except for the horse and buggy, no livestock are visible, likely shut away in one of the barns. 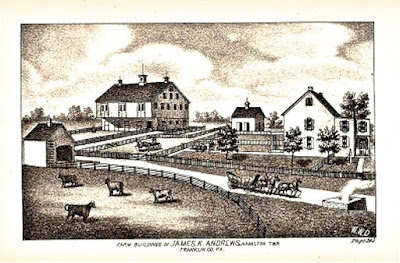 Somewhat less impressive is the farm of James K. Andrew.  Although the barn is of the usual scale and livestock are evident, the farmhouse appears to be more modest and the number of outbuildings limited to two.  Note that this farmscape is bifurcated by a road through which a team is pulling a Conestoga wagon. As was his custom Denslow has signed the lithograph in the lower right corner with his initials. 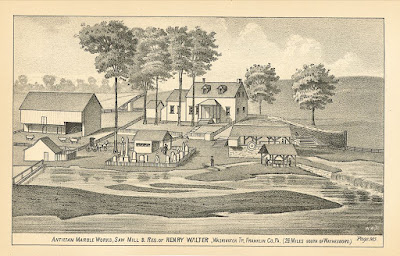 Denslow also provided illustration of rural enterprises.  His landscape of the Antietam marble works, sawmill, and home of Henry Walter leaves no doubt that the primary products of the site were cemetery monuments and tombstones.  The work of cutting the marble and planks in the sawmill was facilitated by the diversion of the stream.  The region is drained by the east and west branches of Antietam Creek, a south-flowing tributary of the Potomac River. 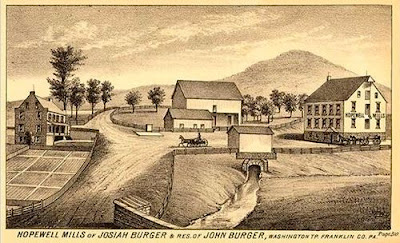 Among my favorite Denslow illustrations is that of Hopewell Mills.  Here the sharp edges of other sites have been softened by some gentle curves, including the hill known as Bare Knob behind.  The view looks northward from a stone arch bridge over the east branch of Antietam Creek.  While the buildings and bridge no longer exist, the two roads do.  The one with the wagon today is known as Fish and Game Road. 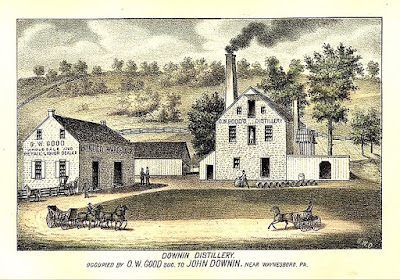 A third rural enterprise sketched by Denslow is of a thriving whiskey-making operation.  After John Durkin’s death Oscar Good had purchased from his family the three-story stone distillery with the smaller bonded warehouse at the left.  The artist emphasizes the activity of the facility by showing a worker rolling one of many barrels to where sales are being made to horse-drawn wagons coming and going.  The slopes behind the distillery are the Blue Mountains, a beautiful low Appalachian range that extends for more than 100 miles through the southern Pennsylvania countryside.


The next illustration takes us from the profane to the sacred.  Robert Kennedy Memorial Presbyterian Church, also known as Welsh Run Presbyterian Church, is a historic place of worship in Franklin County, Pennsylvania. Built in 1871, it is a 1 & 1/2-story frame Italianate-style building. Still standing, the church features a Tiffany stained glass window dated 1934.  The church is named for Rev. Robert Kennedy, who served the congregation twice during the period 1802 to 1843. 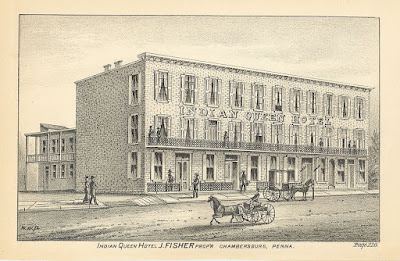 Denslow also was commissioned to illustrate buildings in an urban setting, including the Indian Queen Hotel, located in downtown Chambersberg.  It was a two story brick building with a center hall.  The ground floor on one side held the bar and on the other a parlor.  Rooms were upstairs.  As might have been noticed earlier, no attempt was made by the artist to provide perspective: the man in the buggy is smaller than the figures on the sidewalk beyond.  In this he was imitating the self-taught itinerant artists of his time — a style many people had come to expect and liked.

W. W. Denslow would go on to illustrate many books, particularly those for children.  His renderings for “The Wizard of Oz” in 1900 would bring him fame and fortune.  With his wealth he bought an island off Bermuda, lived there as a recluse and ultimately drank himself to death.  His legacy remains in the many charming drawings he made — including, I believe, the lithographs for the
Chambersburg centennial celebration.

Note:  This is the second article I have posted on this blog about W. W. Denslow.  He was, in fact, the subject of my first post way back on April 30, 2009.  For my “Pre-Prohibition Men” blog I have written a biography of O.W. Good, the Franklin County distiller, dated April 6,2012.