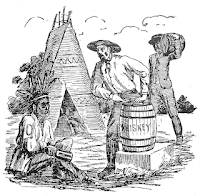 Forward:   The official Government view about selling liquor to Native Americans was expressed in an 1833 report by the Commissioner of Indian Affairs to Congress:   “The proneness of the Indian to the excessive use of ardent spirits with the too great facility of indulging that fatal propensity through the cupidity of our own citizens, not only impedes the progress of civilization, but tends inevitably to the degradation, misery, and extinction of the aboriginal race.”  Given that warning and federal laws against selling booze to indigenous peoples, it is startling to realize how many distillers and liquor dealers used Indian images on their whiskeys.  This post, my second on this subject, documents nine more. 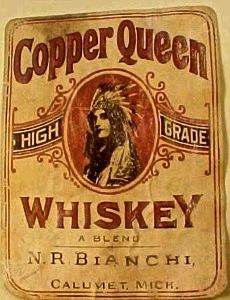 The first example is a label from Calumet, Michigan, showing a comely maiden in  a headdress advertising “Copper Queen Whiskey,” a blend.  It was produced by Nariso Bianchi, an italian-born 1897 immigrant to the U.S.  About 1904 Bianchi, with a partner, opened a saloon and liquor store.  Although he was a “rectifier” not a distiller, that is, blending whiskeys for color, taste and smoothness, he did his own bottling and labels, advertising Copper Queen Whiskey as proprietary. 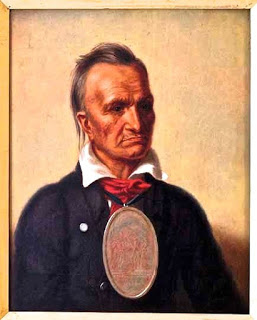 By coincidence Calumet at the time was named “Red Jacket,” the same name and personage as the next whiskey.  Red Jacket was a Seneca chief who had fought on the side of the British in the American Revolution and was named for having worn the British red coats.  His real name was Sagoyewatha (He Keeps Them Awake), and was adamant against the white man, his ways and especially the Christian religion.  Nevertheless, Buffalo distiller Thomas Clark named his facility and whiskey after him.  Red Jacket is shown here wearing a medal later bestowed on him by George Washington, a reward for abandoning the warpath. 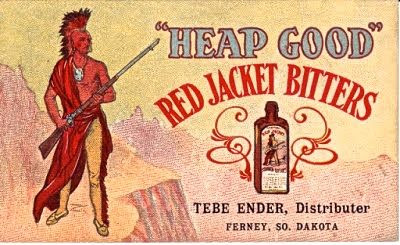 Meanwhile, in Chicago a young Bennett Pieters was profiting greatly from selling a highly alcoholic Red Jacket Stomach Bitters.  By wrapping his remedy in an Indian motif, Pieters was tapping into the rampant myth of the times that Native Americans possessed special knowledge of medicines.  For a time it made him rich, until several fraudulent schemes and his own alcoholism led to his downfall.  Abandoning his family, Pieters joined the U.S. Cavalry in 1871, went West, and became an Indian fighter. 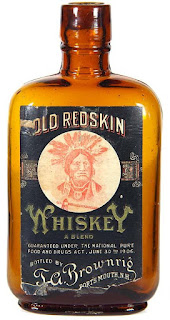 Searching for an image to illustrate his “Old Redskin” blended whiskey, Thomas A. Brownrig of Portsmouth, New Hampshire, chose a scowling chief with a downturned mouth, carrying a hatchet.  American Indians of the Abenaki and other Algonquian languages-speaking nations had inhabited that part of coastal New Hampshire for thousands of years before European contact.  Brownrig advertised widely in local media  calling himself a “Dealer in Foreign and Domestic Liquors, Imported Goods a Specialty.”  He also claimed be Portsmouth exclusive agent for the popular I. W. Harper Whiskey. 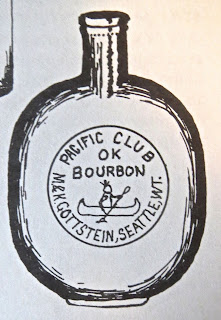 Meanwhile on the West Coast, the Gottstein brothers of Seattle chose a canoe-borne indigenous American to be embossed on their liquor flasks.  Chief Seattle (1786-1866) was a leading figure of the Suquamish and Duwamish tribes who pursued a path of accommodation toward white settlers.  A widely publicized speech arguing in favor of ecological responsibility and respect of Native Americans' land rights has been attributed to him. 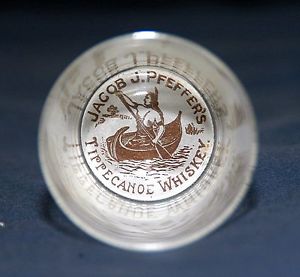 An Indian maiden illustrated “Tippecanoe,” a double fire copper whiskey from Joseph Pfeffer, a Cincinnati liquor wholesaler.  For saloon signs, almost always displayed in places where women and children were excluded, the Tippecanoe husky lass was shown bare-breasted.  When used on the label of a bottle that might find itself on a grocer’s shelf or a druggist’s display case where the eyes of the world might see, the maiden was more chastely dressed. At the bottom of a shot glass, as shown here, it is hard to tell. 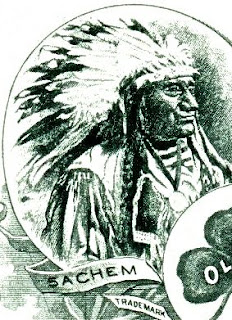 From a letterhead came the Indian chief advertising “Sachem” brand whiskey.  The term “sachem” is defined as a North American Indian chief especially the chief of a confederation of the Algonquian tribes of the North Atlantic coast.  In this case the whiskey was the product of the Rehm-Zeihler Company located in Louisville, Kentucky.  This firm was established by O.E. Rehm in 1904 and continued in business until closed by National Prohibition. 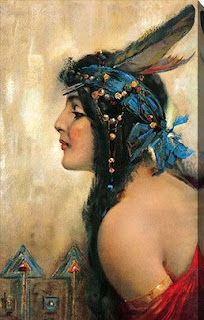 The comely Indian maiden seen here was an advertising element of Isaac and Bernard Bernheim Bros., acclaimed as the most successful distillers in American history.   Located in Louisville, the brothers registered the famous “I.W. Harper” brand. The "I W" initials were borrowed from Isaac's own name, while Harper was the surname of a well known Kentucky horse breeder. The whiskey went on to win multiple medals for quality, the first being at the New Orleans Exposition in 1885. 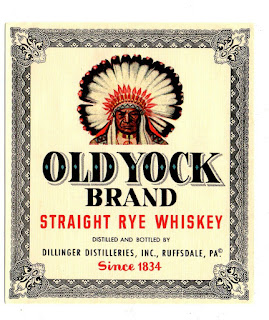 Our final Native American selling whiskey is a stern-looking chief whose face graced the label of “Old Yock” brand straight rye whiskey from Dillinger Distilleries of Ruffdale, Pennsylvania.  For several years before the Civil War Samuel Dillinger drove a large Conestoga wagon pulled by six horses across the Allegheny Mountains on the Nation Pike, transporting merchandise between Baltimore and Pittsburgh.  After settling down in Pennsylvania, he became the second largest distiller in the state, hauling out fifty newly filled whiskey barrels every day from his distillery to store in his warehouses and then delivering a quality aged rye like “Old Yock” to his customers.

Posted by Jack Sullivan at 6:27 AM