Drinking and Hunting — One More Time

Forward:  Regular readers of this blog will recall my fascination with the concept of advertising whiskey, beer and other alcoholic beverages with hunting motifs.  Although examples have been greatly reduced in the years since National Prohibition shut down the legitimate liquor trade in 1920, many of the earlier ads are still around to remind us of the close identification of drinking and hunting in an earlier day.  My three earlier posts are referenced below. 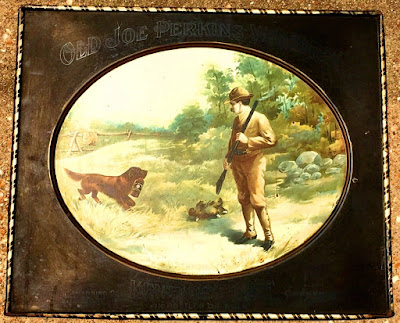 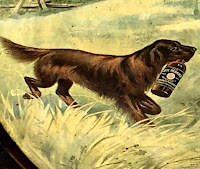 The first example here is from a saloon sign entitled “Old Joe Perkins.”  It depicts a hunter, shotgun in hand, who apparently has just riddled a trio of quail.  His retriever, having dutifully has brought the bagged prey to the feet of his master, now has gone afield to fetch something else.  By enlarging the shot we can see that the dog is carrying a bottle of whiskey in his mouth — Old Joe Perkins.  This brand was the product of the Perkins & Manning Distilling Company of Owensboro, Kentucky.  The sign likely dates from the mid-1910s and recently sold at auction for $510. 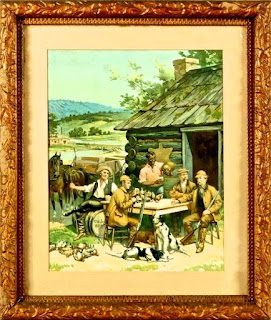 The next example is also a saloon sign, issued by the Rheinstrom Bros., a liquor house in Cincinnati.  The sign depicts four hunters ranged around a table with their dogs at their feet, apparently having shot a covey of birds.  One of them is sitting on a barrel that advertises “Old Joe Clayton,” one of a blizzard of whiskey brands issued by Rheinstrom.  Three of the men have their shotguns at the ready, apparently in the hope of a passing flock, while being served glasses of whiskey by a genial black gentleman, apparently the proprietor of this roadside log cabin saloon.  Rheinstrom Bros. claimed founding in 1876 and closed in 1917 when Ohio went “dry.” 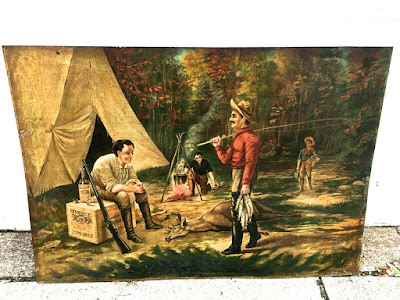 While a hunter contemplates the dead deer at his feet, an angler returns to camp with a hefty stringer of fish.  A shot glass of whiskey — “Humbolt Rye” — is there to greet the fisherman;  the hunter has already downed his drink.  Meanwhile other men are readying the fire.  Fish on the menu tonight.  Humbolt Rye and this saloon sign both were the product of the P. J. Bowlin Liquor Company of Saint Paul, Minnesota.  This liquor house was founded in 1904 and went out of business about 1916.   The whiskey apparently was named for Alexander von Humboldt (1769-1859), the famous Prussian explorer, naturalist and geographer. 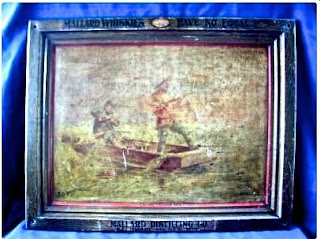 On a damaged saloon sign is the image of two duck hunters poised to fire from a flat bottomed boat.  One man is standing with his legs positioned to brace him against the recoil of the shotgun.  Not a good idea.  The sign was issued by the Mallard Company, an outfit that operated in  Baltimore the early 1900s.  The firm was not named for the duck but for Charles and Ira Mallard, respectively president and vice president. 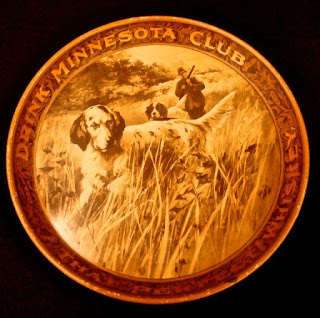 Another St. Paul liquor dealer with hunting on his mind was A. Hirschman.  He advertised his “Minnesota Club” a serving tray that featured a woodlands scene in which two dogs are leading a hunter, shotgun at the ready, through some tall grasses where there may lurk a grouse or woodcock.  This alcoholic libation carried the slogan, “The Perfect Whiskey.” 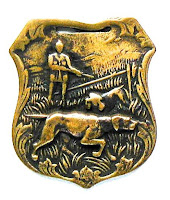 In addition to advertising through saloon signs and serving trays, whiskey dealers used a range of items for marketing purposes.  A favorite was the watch fob, a giveaway that would allow a customer attaching it to his pocket watch to be a walking advertisement.  The fob above, showing a hunter and his dog on brass, was the product of Schiller Bros., a Kansas City liquor wholesaler and proprietor of “Old Sunny Times” whiskey.  In another marketing gambit, Schiller Bros. as a means of reaching the African-American community offered photos of Booker T. Washington as a premium.  Schiller Bros.  stopped when Washington objected. 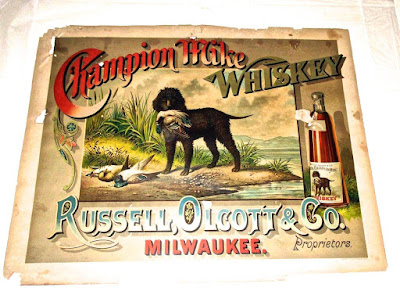 By far the most colorful and artistically interesting sign advertises “Champion Mike Whiskey,”  the product of the Russell, Olcott Company of Milwaukee.  The
Illustration is of a dog, presumably Champion Mike, with a dead mallard duck still in its jaws, ready to add it to a pile of other indeterminate dead birds.  The breed is a curly-coated retriever, described by enthusiasts as:  “…Among the oldest of the retriever breeds, is a famously versatile gundog and peerless swimmer. Poised, proud, and wickedly smart, the Curly is a thinking person’s retriever who will never quit before you do.” 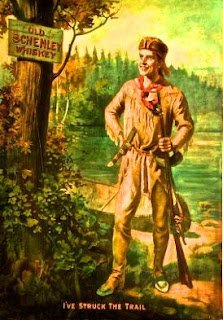 Founded in 1913 and later to become a liquor behemoth, Schenley Distilling Co. of Chicago featured a hunter of an earlier day with a muzzle loaded rifle, a buckskin jacket and a coonskin cap.  This pioneer has seen a primitive sign for “Old Schenley Whiskey” nailed to a tree and, apparently with little else to do, has stopped to admire it, intoning “I’ve Struck the Trail.”