Enlisting Uncle Sam in the marketing of alcoholic beverages was a common occurrence in pre-Prohibition America.  In three prior posts I have featured the national Uncle as he has been depicted endorsing a range of whiskeys.  [See references below.]  That rush to identify with the old man in the red striped trousers was related to the passage by Congress of the Bottled in Bond Act of 1879 that empowered Federal authorities closely to monitor distillery warehouses for tax purposes.  Even without such direct government scrutiny, purveyors of imported scotch, spiritous bitters, premixed cocktails, wine and beer, also saw Uncle Sam as advantageous to their marketing. 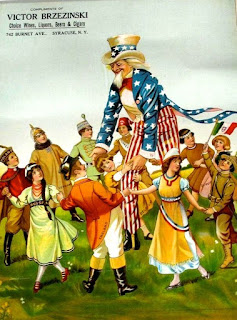 Kicking off this vignette is a colorful image of Uncle Sam holding out his loving arms to a little girl whose dress identifies her as “Belgium.”  He is surrounded by ten other youngsters, all identified by costume and name as representing other European countries.  The poster was issued by Victor Brzezinski of Syracuse, New York.  Appropriate to the theme here Brzezinski sold a range of alcoholic goods, including wine, liqueurs and beer. 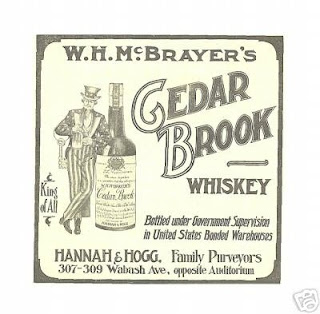 Judge W. H. McBrayer of Anderson County, Kentucky, with three whiskey warehouses was one of the distillers who used Uncle Sam frequently in his advertising.  McBrayer concentrated on making a high quality whiskey and marketing it widely. According to legend, Wife Mary urged him to call the brand after the nearby stream. Thus, In 1861 Cedar Brook brand is first recorded as being used in commerce. Its growth over the following years was swift, aided by winning first prize and a gold medal for whiskey at the Philadephia Centennial Exposition of 1876.

Another whiskey that saw fit to identify with Uncle Sam was Jim Beam, a brand of bourbon produced in Clermont, Kentucky.  Founded 1795, seven generations of the Beam family have been involved in producing the brand, although the name “Jim Beam” dates from after Repeal.  The jug, often called a “toby jug “ was the product of England’s Doulton Pottery.   That company also produced the Dewar’s Scotch jug of Uncle Sam smoking a long clay pipe.  Dewar’s whiskey brand was created in 1846 in the Perthshire region of Scotland by John Dewar Sr.  Since then Dewar’s has had several international owners. 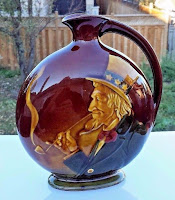 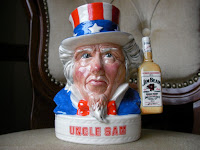 In its color lithograph trade card, Abbott’s Aromatic Bitters featured an Uncle Sam arm in arm with a distinguished gent who in turn is linked with a clownish figure with a crown identified as Old King Cole.  What any of this trio have to do with the bitters is unclear.  We do know that the original name was C.W. Abbott's Angostura Bitters, adopted in 1872, and many subsequent legal battles resulted with the word “Angostura” being stricken in 1908.  Nonetheless, the principal ingredients in this bitters was angostura (tree) bark and lots and lots of alcohol. 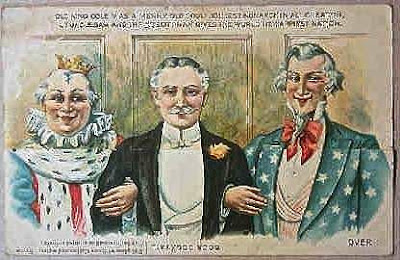 The Garrett Company of Weldon, North Carolina, furnished customers with a wall sign that featured Uncle Sam in a toast with Miss Liberty (was she a drinker?) of “Escapernong,” billed as “An American Wine for Patriotic Americans.”  From its home in Weldon, the Garrett Co. operated as a thriving business for years, shipping grapes from regional vineyards to the winery in Weldon. Garrett's wines began to be recognized worldwide, but in Weldon, the winery was threatened by state prohibition and forced to move to Norfolk and later to New York. 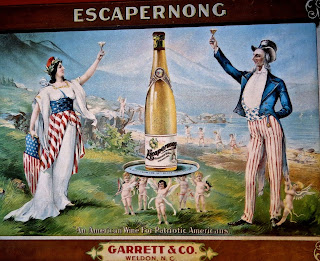 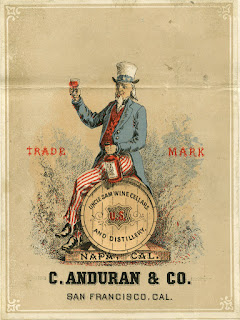 By trademarking its facilities as “Uncle Sam Wine Cellars and Distillery, the C. Anduran Company of San Francisco stole a march on other wineries who might have wanted a similar image.  Uncle Sam became a “man on a barrel,” a traditional pose described in depth in my post of May 12, 2018.  This wine company is recorded as in business from 1876 from 1887, located at 515-517 Sacramento Street.  The owners were C. Anduran and C. Carpy. 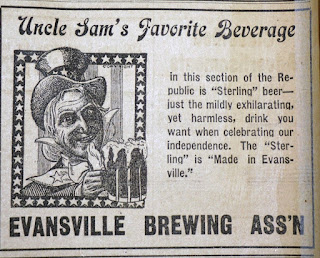 Brewers did not shrink from using the national symbol. Shown here is a slightly manic-looking figure assuring us that Sterling Beer from the Evansville (IN) Brewing Assn. was not only Uncle Sam’s favorite beverage but “just the mildly stimulating drink you want….”  Well maybe.  On March 13, federal authorities seized and condemned 295 cases holding 10,380 bottles of Evansville Brewing beer in Louisville, Kentucky, claiming that it had been adulterated and misbranded.  The government testing found that an unidentified substance had been added to the beer, substituting for malt.  The company pled guilty and was fined $200, a slap on the wrist. 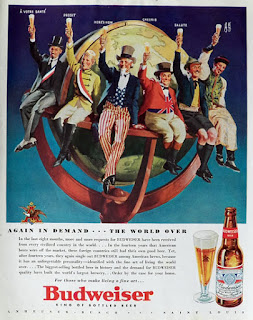 Not all Uncle Sam ads were pre-Prohibition.  Here is a Budweiser ad from 1934, shortly after Repeal.  It shows Uncle Sam sitting on top of the world with figures in national uniform, left to right — France, Germany, Sam,. England, Spain and Japan.  The message is that during Prohibition, each country had its own beer but all were delighted to have Budweiser back in production:  “The biggest-selling bottled beer in history and the demand for Budweiser quality have built the world’s largest brewery.” 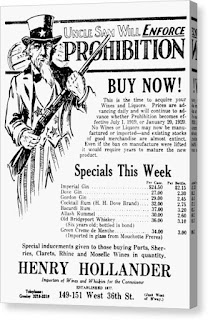 The final ad in this series has an entirely different twist on the Uncle Sam personna.  No longer is he seen with a glass of whiskey, wine or beer in his hand, or sitting on a barrels of booze, but carrying a gun.  A New York City liquor dealer named Harry Hollander was warning the public that:  “Uncle Sam Will Enforce Prohibition.”  Existing stocks of good merchanise are almost extinct, he claimed.  As a result the public should “BUY NOW,” and Henry could accommodate  with gin, rum, whiskey, liqueurs, and wine.  At the time sales of alcohol were still legal, so Sam, for goodness sake, put the rifle down.