The invention of celluloid in 1872, the first commercial plastic, opened up new avenues for advertising.  One was the pocket mirror, a small device with a shiny metal surface on one side and a multicolored ad on the back.   The American brewing industry was quick to see the advantages of giving these to customers as a means of keeping their brands in mind.  The vast majority of these were issued pre-National Prohibition and thus have entered — or soon will — the definition of “antiques.” 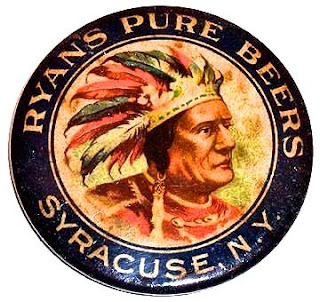 An example of the artistry pocket mirrors display is the Native American in a feathered headdress that graces an artifact advertising Ryan’s Pure Beers.  This brewery was founded in 1865 at the end of the Civil War.  In 1887 Thomas Ryan, the former mayor of Syracuse, New York, became the sole owner of the brewery and changed its name to his own, operating it until 1900 when he sold out to local brewer Charles Hoffmann.  Hoffman kept the Ryan name on the facility until closed down by Prohibition. 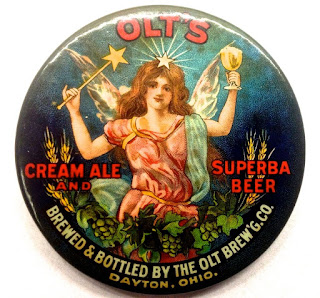 Equally impressive art work adorned a mirror issued by the Olt Brewing Company of Dayton, Ohio.  It is an angel surrounded by hops and wheat holding aloft a wand in one hand and a stein of beer in the other.  John Olt and his four sons, Charles, Frederick, Edward and Oscar, incorporated the Olt Brewing company in 1907.  By 1912 Olt Brewing employed seventy people and annually produced about 35,000 barrels of beer and ale.  Originally incorporated for $50,000 in 1907, the value had increased to over $180,000 before Prohibition closed it. 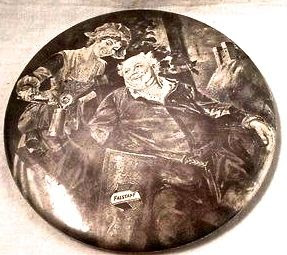 The Falstaff Brewing Corporation was a major American brewery located in St. Louis, Missouri.  With roots in the 1838 Lemp Brewery, the company was renamed after the Shakespearan character Sir John Falstaff in 1903.  The figure of the fat knight came to dominate the advertising for the brewery.  The brewing company closed in 1921, and sold its Falstaff brand to a firm that survived Prohibition by selling near beer and hams under the Falstaff name. 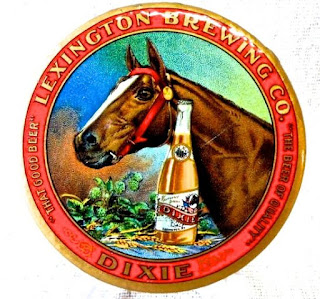 In the fall of 1897, J. Henry Zitt of Chicago traveled to Lexington to investigate the possibility of establishing a brewery.  He liked what he saw in economic prosperity and population growth and by 1898 had erected a splendid new brewery.  The cost of the brewery was $150,000 (equiv. today to $3.3 million.) In excess of one million bricks were used in its construction.  The Lexington Brewing Company annual capacity was 40,000 barrels or roughly 600,000 cases.   Given the identification of Lexington with horse racing, the image on the mirror seems highly appropriate. 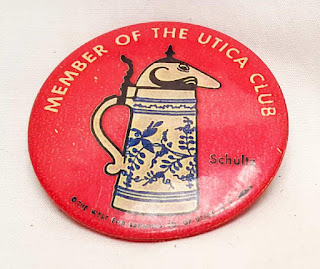 Occasionally, a brewer would provide a mirror that was a “tie-in” to a larger ad campaign, as demonstrated by this Utica Club brew from the West End Brewing Company in the New York city.  Utica Club's most famous campaign icons were a pair of character beer steins  "Schultz and Dooley.”
The mirror depicts only Schultz, a German, with a mustache and Prussian spiked helmet.  Beer steins with these two characters regularly sell for more than $1,000 at auction. 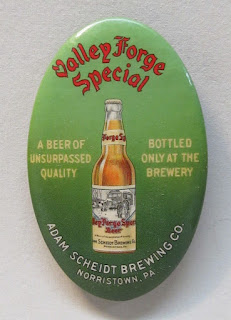 It was common for brewers to display a bottle of their flagship brand on the mirror back, as shown in the next four examples.  The Adam Scheidt Brewing Company originated in a Norristown, Pennsylvania, facility about 1866.  After a series of ownerships.  Scheidt would go on to become one of the largest brewers in the region, producing 60,000 barrels of beer a year, and had a branch location in Baltimore.  Its flagship, appropriately, was the Valley Forge Special. 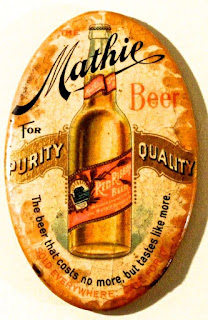 While Scheidt’s beer boasted of “unsurpassed quality,”  the Mathie Brewing Company touted its flagship “Red Ribbon” brew as:  “The beer that costs no more but tastes like more.”  Founded in 1903, this organization was located on East Main Street in Los Angeles said to be a “mammoth establishment.”  The beer sold throughout California and adjoining states until the brewery was shut down by Prohibition in 1920.  After Repeal it re-opened briefly before closing for good. 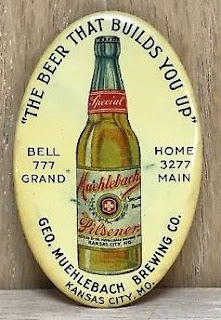 George Muehlebach immigrated to Kansas City, Missouri, in 1859.  A decade later he bought an existing brewery, razed it and and replaced it with a "Beer Castle" built in Romanesque style with a mansard roof  tower.  Muehlebach’s beer proved very popular and the company survived during Prohibition by selling non-alcoholic beverages.  During World War II, the brewery more than doubled production from 66,000 barrels a year to 161,000, before eventually being sold to Schlitz. 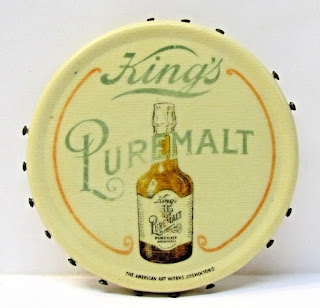 Although King’s Pure Malt was sold as a tonic for “to assist the stomach to retain and digest food” and “enrich the blood and strengthen the system,” it was, in fact, a variety of beer, containing six percent alcohol.  Founded in 1908 in Boston,  King added hydrophosphates of iron and lime to the brew to lend it a medicinal character.  It too may have fallen victim to Prohibition, closing about 1918. 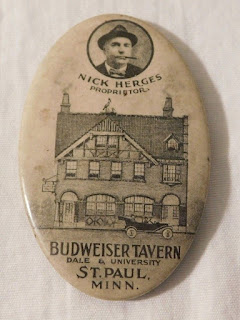 The final pocket mirror here is from a drinking establishment not a brewery.  It is included here not just because of its interesting picture of St. Paul’s Budweiser Tavern, indicating a saloon tied to the St. Louis brewery.  This item sold at auction in December 2018 for $127.27, signaling the value that some pocket mirrors have accrued over time.  Every indication is that as th years pass prices will continue to advance, especially for those issued pre-Prohibition and still in good condition.  For example, the mirror with the Indian image that opens this post was valued at $550 in a 2002 catalogue.