Authors being affectionate toward, and sometimes addicted to, strong drink is a tradition almost as old as literature itself.  Writers and alcohol bear an identification that a number of distillers and brewers over the years have believed would sell their products.  This post is devoted to examining the advertising approaches to accomplishing that goal. 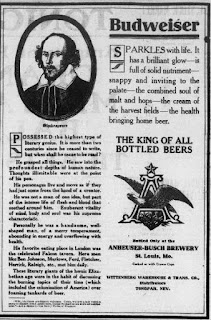 Shakespeare has been a perennial favorite for peddling booze.  An example is a Budweiser ad from the 1940s that has a picture and a seven paragraph blurb about the Bard’s life and character.  Only in the last graph, does the ad get down to business, reminding us that Shakespeare and other “literary giants” met at taverns where their conversations were held “over foaming tankards of beer.”
Then we learn that “Budweiser sparkles with life,” presumably in a tankard. 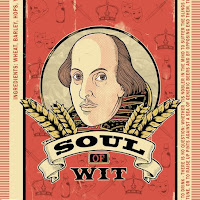 A more contemporary look at the Bard is provided by the label from “Soul of Wit” beer, likely designating a Belgian whit beer.  It derives from a line from Hamlet, Act 2:  “Therefore, since brevity is the soul of wit, and tediousness the limbs and outward flourishes, I will be brief.”  Rather than use that line the label spoofs Hamlet’s soliloquy as “To drink or not to drink, there is no question.”  Shakespeare light. 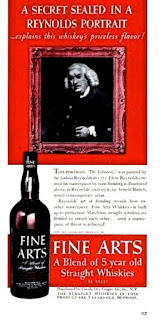 The Canada Dry distillery featured a portrait of Dr. Samuel Johnson, the great British encyclopedist, to sell its “Fine Arts Whiskey.”  The connection was a portrait of Johnson by Sir Joshua Reynolds where the artist blended his colors to create a masterpiece.  Similarly, the distillers of Fine Arts are extolled in the ad for blending  straight whiskeys to create “a masterpiece of flavor.”  The presentation ignores the fact that Johnson himself was a teetotaler. 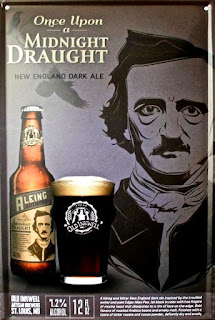 A St. Louis brewery called “Old lnkwell” issued a line of beers whose labels featured a line of safely dead American and English authors, both men and women. Among them was a brew was called Midnight Draught, “a biting and bitter New England dark ale inspired by the troubled writer and poet Edgar Allen Poe.” The label fails to mention that, among his troubles,  Poe struggled constantly against alcoholism and that his addiction cost him employment, relationships, reputation and ultimately led to his death.

Mark Twain, who wrote often and favorably on alcoholic spirits,  was another favorite author of the distilling trade. [See my post of April 4, 1910 on Twain].  Shown here are two ads from an Old Crow whiskey series that feature the American humorist and novelist.  Although at one time the whiskey had been the top selling bourbon in the United States, it underwent a swift decline after Repeal of National Prohibition because the whiskey developed a taste many drinkers found unpleasant.  Parent company National Distillers may have conceived the Twain series as giving a patina of age and quality to Old Crow. 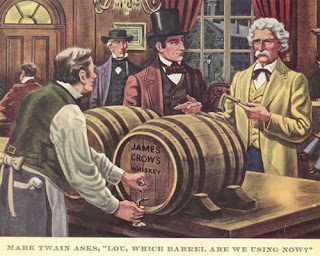 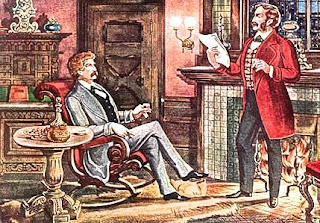 Another Old Crow ad, however, contained an almost comical error.  It purports to show the Western writer, Bret Harte, discussing a manuscript with his friend good friend Mark Twain.  In matter of fact, the two could not stand each other.  In his Autobiography Twain wrote:  “In the early days I liked Bret Harte and so did others, but by and by I got over it; so also did the others.  He couldn’t keep a friend permanently.  He was bad, distinctly bad;  he had no feeling and he had no conscience.”  The scene in the ad could never have happened. 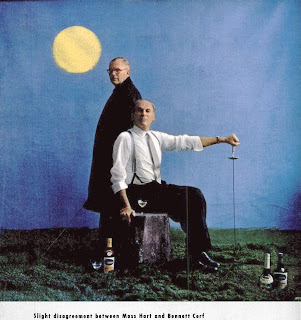 When Heublein Cocktails got two authors together it matched friends, playwright Moss Hart and celebrity author/publisher Bennett Cerf.  Although the text emphasized a “slight disagreement” (over how to make a martini), the photo showed the two men with dueling sabers.  Reproved by his wife for the image, who pointed out that he didn't need the money, Cerf is said to have replied:  “Everyone needs money. Besides, I like the publicity and I'm all dressed up in a dueling outfit in the ad.”

Cerf (1898-1971), who is remember by old timers for his participation on an early TV show called “What’s My Line,” also provided an endorsement for National Distillers’ featured brand of scotch.  “When I drink Scotch, I ask for today’s Old Angus.  It’s an excellent whiskey.”  For a man known for his wit, this endorsement seems by Cerf seems rather uninspired .

Another Old Angus ad featured  Ogden Nash (1902-1971), an American poet well known for his light verses, of which he wrote more than 500.  Considered America’s premier author of humorous poetry, Nash made guest appearances on radio and early TV and spoke on college campuses.  His take on alcohol was summarized in the verse:  “Candy is dandy but liquor is quicker.”  In contrast, National Distillers has Nash intoning the utterly prosaic:  “Folks to whom we serve Old Angus — thank us.”

Lucius Beebe (1902-1966) was the author of some 35 books, many of which involved high society, railroads and the Old West, and a journalist who once ran the Territorial Enterprise newspaper in Virginia City, Nevada.  The newspaper was relaunched in 1952, and by 1954 had achieved the highest circulation in the West for a weekly newspaper.  Once again the Old Angus ad saddles this colorful  writer with a line he would never have written himself.

No one who knows anything about Earnest Hemingway would peg him as a beer drinker.  The hard stuff — whiskey, rum, etc. — were his libations of choice.  Ballentine Ale must have paid him a princely sum to endorse its brew.  What is more, the brewer added a long screed that purports to be by the author’s own hand putting “a glass of Ballantine Ale into words.”  Unfortunately the text “ad-speak” fails to reflect Hemingways distinctive writing style. 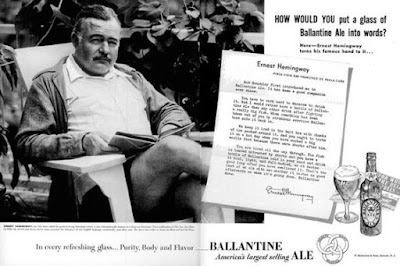 The final ad is from Smirnoff Vodka showing Truman Capote looking pensive while in his right hand he holds a drink that mixed virtually tasteless alcohol with orange juice, popularly known as a “screwdriver.”  Some believe the mixed drink was invented by interned American fliers during World War II.  Capote’s presence in the ad is an ironic reminder that he, like Poe and Hemingway, struggled with alcoholism during much of his life. 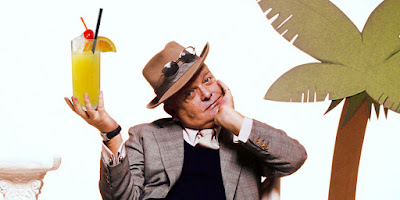 Today few if any authors are celebrated as were those cited above.  Literary fame means little to most Americans in the 21st Century.  Liquor and beer ads today feature movie stars, sports heroes and other celebrities, and almost never writers.  Thus we are spared seeing the Nation’s “literary lights” brought to banality by the ministrations of admen.

Posted by Jack Sullivan at 8:36 AM