"Cheesecake" to describe a a sexy, attractive woman flaunting her appeal is nowadays is said to be a rather archaic term.  Yet there it seems to be the most appropriate word for the ten signs and posters shown below.  The juxtaposition of scantily clad women with large machinery puts one in mind of the pin-ups that often adorned bomber aircraft in World War II. 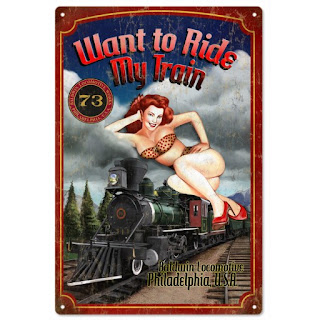 Take for example, the metal sign at right, ostensibly a vintage ad from the Baldwin Locomotive Works in Philadelphia.  Reclining on the cab of Engine 73 is comely damsel in a lepoard skin bikini bathing suit asking coyly:  “Want to Ride My Train?”  Four generations ago she could have been flying bombing raids over Berlin.  By the way, Baldwin Locomotive produced the last of its 70,000 plus engines in 1956 and went out of business in 1972. 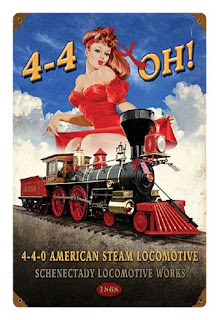 Baldwin was preceded in demise by the Schenectady Locomotive Works in 1901.  Before it went, however, in 1868 the factory produced the 4-4-0 No. 60, called the Jupiter, one of two steam engines to take part in the “Golden Spike Ceremony” to celebrate the completion of the first transcontinental railroad, connecting the Central Pacific and Union Pacific Railroads. Jupiter’s celebrity seems to have attracted a lady in red. 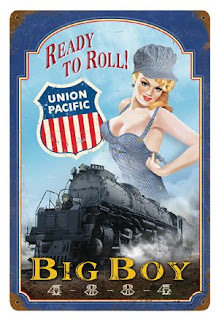 Union Pacific attracted its own busty blonde, one dressed in trainman garb, who is “Ready to Roll” on “Big Boy 4884.”  This engine was manufactured by the American Locomotive Works in Schenectady from 1941 to 1946.  Union Pacific is a freight hauling railway that currently operates some 8,500 locomotives in 23 states west of Chicago — but not Big Boy.  It retired in 1956. 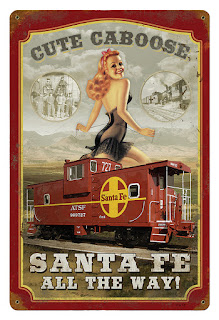 What is going on here?  Why are pin-ups adorning long retired steam engines?  Some catalogues feature these as reproductions of vintage railroading ads.  Patently absurd.  But are they fakes, as some believe?  No, they are newly created images aimed at a market of men who have elaborate electric train arrays and want something to adorn their walls.  Sometimes even a Santa Fe caboose will do if it has features a lass in a black lace undergarment. 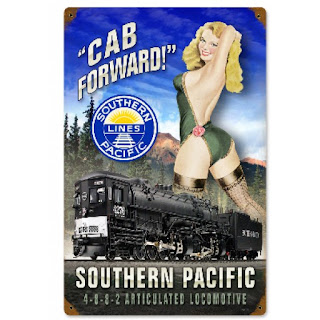 Southern Pacific Railroad was a major railroad system that survived more than a century by incorporating many smaller lines.  It featured a modern looking steam engine.  Its “cab forward” design also was a great excuse to feature a chesty young woman in a green outfit with matching stockings who is striding over a mountain landscape.  The locomotive is billed as “articulated.”  That term also fits the pin-up. 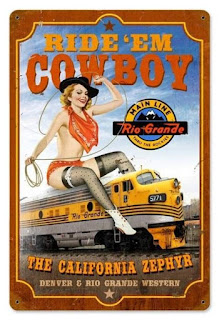 Put yourself in the place of one of these choo choo enthusiasts.  They are accustomed to their friends snickering about men who play with kids’ toys.  What better way to flash the macho badge than to adorn your train room with a picture of an engine pulling “The California Zephyr” of the Denver & Rio Grande Western Line while a shapely cowgirl sits atop the train, apparently wearing only a neckerchief above the waist. “Ride ‘Em Cowboy.” 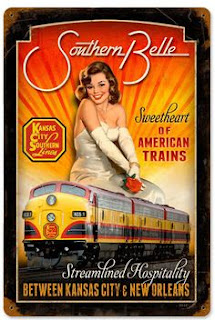 Of course if the missus objects to semi-clad cowgirls, more demure — and clothed — alternatives are available.  Note this satin-covered brunette, apparently meant to represent the “Southern Belle” route of the Kansas City Southern Line, one of the smallest as well as third oldest Class 1 railroad operating in North America.  Founded in 1887, the railroad in recent years had more than 6,000 employees. 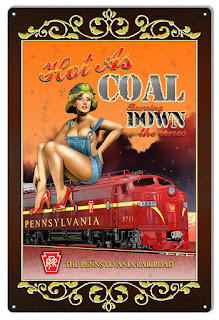 Although these signs are far from antiques and hardly even “vintage,” I consider them works of contemporary art.  As with the Pennsylvania Railroad sign here, lithographed on metal or paper, they feature vivid colors, striking designs and sufficient silliness to make them interesting.  “Hot as coal burning down the lines,” says this one, clearly referring to the buxom beauty and just as clearly making no sense.  A century from now it may hang in a museum as a sign of our times.

The next two images, one from the defunct New York Central System and another from the familiar Amtrak, both urge that we travel home for the Holidays by train.  My wife and I once spent two days and a night on a train going to New Orleans at Christmas.  She says, “Never again.”  For me the signs represent something else.  “What shall we get Dad for Christmas?”  Easy answer — serve up some cheesecake for his train room.