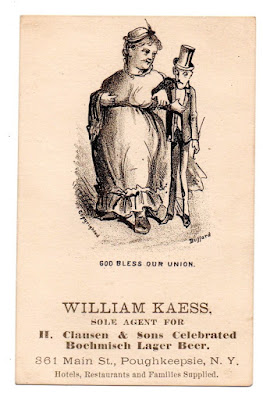 The subtle humor of a trade card entitled “God Bless Our Union” first led me to the artist whose name appears below the image of a mismatched couple. A very large woman is looking possessively at smaller stick of a man who seems much less assured of that the pairing is beneficial.  The illustrator was John Henry Bufford, the first employer and art teacher of Winslow Homer and in his time a successful competitor of Currier & Ives.  Subsequently overshadowed by both, Bufford’s success as a prolific American lithographer and illustrator unfortunately largely has been forgotten.

Born in Portsmouth, New Hampshire, Bufford apprenticed in Boston and, by 1835, briefly moved to New York, where he opened a lithography business. Five years later he returned to Boston and formed a partnership with his brother-in-law in a new lithographic printing firm, for which he did most of the drawing. The business, with and without his brother-in-law as partner, thrived for the next forty years.

Shown here is a billhead from 1859 in which Bufford describes himself as a “practical lithographer,” meaning that he was turning out not just attractive pictures but practical items such as maps, covers for sheet music, and “show cards,” usually referred to today as trade cards.  Many of those images would fill the upper two-thirds of a cardboard leaving space on the bottom for a message by a tradesman like William Kaess, a Poughkeepsie agent for a beer company who supplied hotels, restaurants and even families with Boehmisch Lager Beer. 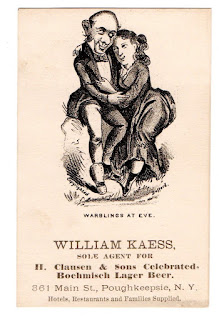 Kaess issued a second slyly humorous Bufford card entitled“Warbling at Eve.”  In this one the male partner seems to have the upper-hand as his lady clings close to him.  The look in his eye and her submissiveness indicates that the warbling may soon occur between the sheets.  Observers have pointed out that as he matured Bufford’s drawings became less realistic in favor of a “sketchier” look that for me enhances their appeal. 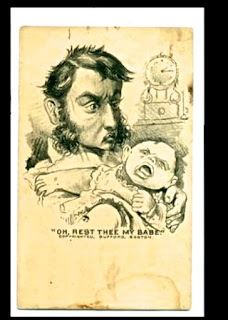 An example is a Bufford trade card that shows an exasperated father attempting to lull his crying baby to sleep while the clock registers 1:15 AM.  Entitled “Oh, Rest Thee My Babe,” only the father’s frustrated head and face are fully realized in the drawing.  The baby and the background are only lightly sketched; the contrast contributes to the humor. 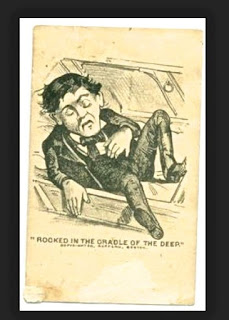 Similarly, the next illustration, “Rocked in the Cradle of the Deep,” only the figure of the man is fleshed out.  He is well dressed, with a cravat and a coat.  The wrinkles in his trouser legs are evident as he appears ready to be pitched out of whatever he is sleeping in.  Is it a row boat?  A bureau drawer?  Or perhaps, as advertised, a cradle?  In any case he seems to be sleeping off a bout with the bottle. 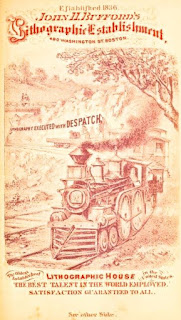 As the company matured and lithographic techniques improved, Bufford remained among the leaders.  A 1872 house trade card for his “lithographic establishment” showed a well executed railroad engine to emphasize the speed with which the company executed lithography.  Bufford employed what he called “the best talent in the world” as his artists.  Among those were Winslow Homer put to work in his studio at age 19 drawing covers for sheet music. 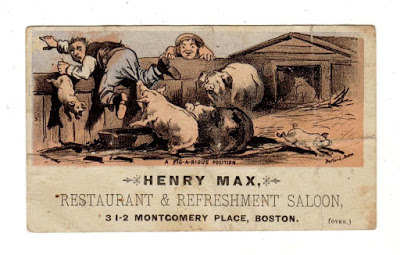 Increasingly the Boston lithographer was employing color in his trade cards.  Among them was a chaotic scene in which a thief attempting to abduct piglet is being challenged by the adult hogs in the pen.  The thief is said to be in a “Pig-A-Rious Position.”  My efforts to find something about the advertiser, Henry Max, and his saloon have gone unrewarded. 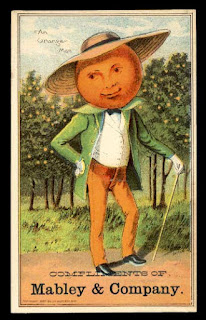 A late series of trade cards from Bufford, issued about 1887, involved anthropomorphic renderings of fruits and vegetables.  “An Orange Man” shows a dude with a citrus head and orange trousers posing in front of an orchard.  It was issued by Mabley & Company, a department store located in Detroit, Michigan, that featured 62 departments selling a wide range of goods including clothing and shoes.

Bufford also gave the world a look at what a true cabbage head might look like, dressed with a top hat, three-button coat and beltless britches.  Fittingly the figure is shown standing in front of a cabbage patch.  On another card the head is of a man but his body is largely a potato shown bulging out of the checked pants the ma is wearing.  Labeled “Potato Bug,” the illustration also shows a black man working in the potato fields behind the figure and looking on in astonishment. 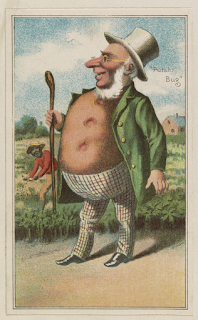 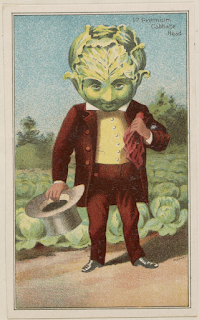 The final trade card shown here continues the idea of a vegetable composing part of a human body — in this case, corn.  The high-stepping gentleman playing the horn wears a skirt of corn silk and a leaf as a shawl.   The caption is a bad pun, “Corn-et Dance,”  a far cry from the subtle humor of Bufford’s earlier products.  The master had died in 1870 and my assumption is that other, less subtle, artists were carrying on the work. 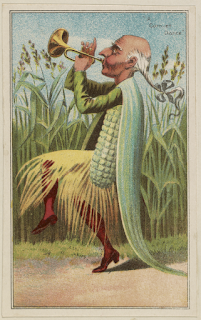 Posted by Jack Sullivan at 6:18 AM