The Yellow Cab — Then and Now 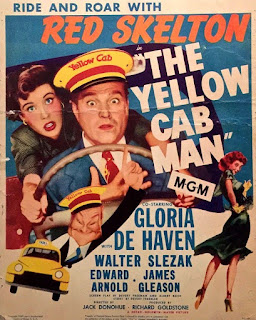 Not long ago I watched a rerun of a Red Skelton movie (1950) called “The Yellow Cab Man,” a film l had first seen as a freshman in high school.  The plot was slightly bizarre but much of Skelton humor had me smiling.  Even so, the thought occurred that in the age of Uber, Yellow and other cabs may becoming relics of technological progress.  Relics fortunately leave artifacts, however, and with Yellow Cab, they are numerous.

Yellow Cab was a taxicab company founded in Chicago in 1910 by John D. Hertz.  Its beginning years were fraught with violence as the organization was involved with Chicago mobsters and a bitter rivalry with Checker Cab during that period was characterized by firebombings, shootings and even deaths. Eventually Yellow Cab franchises had covered much of the Nation.  The companies advertised aggressively, often using items such as paperweights and pocket mirrors to remind customers of their services. 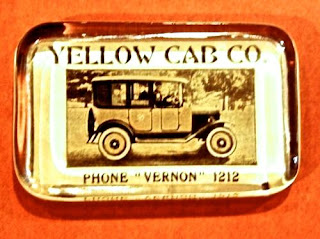 Here are two paperweights from Yellow Cab.  The one top contains only a telephone number that appears to be a Baltimore exchange.  The second, below, carries no city identification but research indicates is from Detroit.  I have been unable to identify the make or model of these taxis.  For a while those vehicles were made in the Yellow Cab Manufacturing Company, founded by Hertz in 1920.  From 1921 it manufactured cabs and light trucks and by 1924 recorded more than $4 million in earnings.  The next year the company sold out to General Motors. 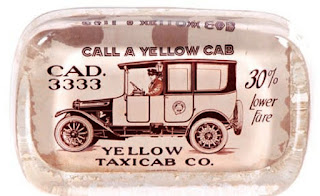 Competition for manufacturing cabs subsequently came from the Ford Motor Company.  It produced a vehicle identified as the “135-A Taxicab”  for two years beginning in 1928.  There was room for four passengers, three passengers in the rear seat and one on a folding jump seat. Each taxicab also was equipped with an internal wall section separating the passengers from the driver. The internal wall had a provision for a speak easy section for communications from passengers to the drivers. 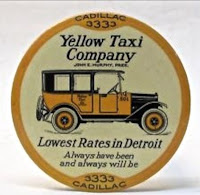 Detroit Yellow Cab consistently advertised its rates, claiming on the weight that they were 30% lower and on a pocket mirror that they: “Always have been and always will be…” the lowest in town.  A  celluloid mirror from Sioux City, Iowa, advertised a 50 % lower fee.  It also suggested: “Let us haul your baggage.”  That is puzzling:  If a customer was traveling and had luggage, would he or she not want it along for the cab ride?  Two addition pocket mirrors were issued by Yellow Cab Companies in Baltimore, Maryland, at left and Muskogee, Oklahoma on the right. 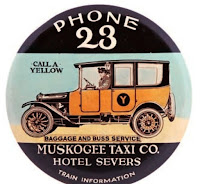 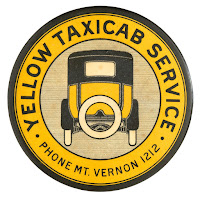 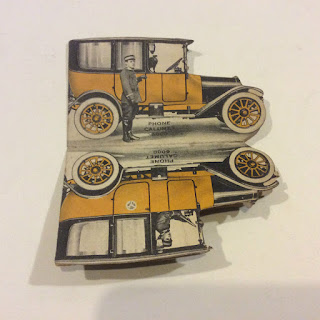 The Chicago Yellow Cab, was responsible for a clever fold-out advertisement.  The driver was seen initially sitting behind the wheel looking out at potential customers.  When opened, the driver has emerged and is holding the door for a patron.  Given the attire of the average cab driver I encounter today, this one looks like he just was discharged from the Prussian army.  The hat, the uniform, and above all the tall boots have a distinctive militaristic look. 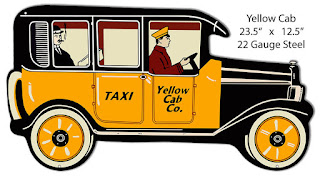 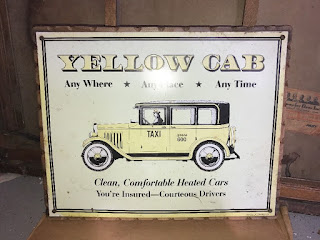 The company also believed in signs.  These were available for use by local Yellow Cabs across the country.  Above is one made of 22 gauge steel, about two feet long.  Unusually, it shows a passenger, a well-dressed business man who is smoking a cigar and holding a briefcase.  While many ads from the Yellow Cab look orange to me, the tin sign right clearly is yellow.  Although I have not identified the city, it was one where a “heated car” might have considerable appeal. 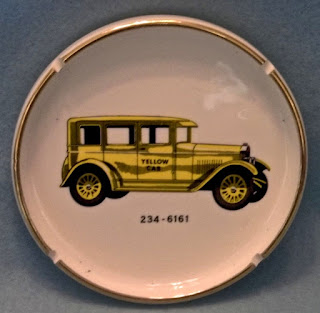 The final Yellow Cab artifact is an ash tray.  It also features a yellow Yellow.  My  research indicates that it was issued by a taxi company in San Diego, California.  These artifacts make take on new meaning as the passenger business changes drastically as the result of cell phones. Yellow has split into multiple companies across the country but continues to face challenges. In 2015, the Yellow Cab of Chicago, the granddaddy of them all, filed for bankruptcy.  Last year San Francisco’s Yellow Cab did as well.  I suspect more failures will come.