Beer on Wheels Though the Decades

The process of hauling beer in barrels, bottles and cans has evolved during the past 150 years as transportation itself has changed in America.  Along the way some intriguing vehicles have been used to cart the suds.  Here a sampling of these vehicles is examined, beginning with the oldest down to the new. 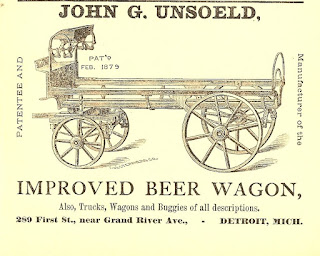 John G. Unsoeld was a manufacturer in Detroit, Michigan, of “Trucks, Wagons, and Buggies of all descriptions.”  About 1879 Unsoeld set his hand to design a new and improved beer wagon, shown here.  In his patent application he claimed that his invention was an improvement to the wagons then being used in delivering beer in casks.  There followed a very technical discussion of the mechanics.  Simplified, Unsoeld’s invention was to raise the seat to allow barrels to be placed under the driver, allowing a shorter vehicle.  Whether Unsoeld ever got orders for any of these contraptions is unknown.  Could they have been un-sold? 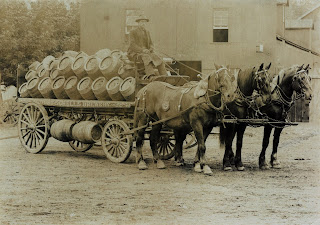 August Schell's wagon also seems to have raised the driver and it fit more beer barrels by hanging them from chains on each side.  To pull this heavy load the wagon required three horses harnessed in line.  Schell, a immigrant from the Grand Duchy of Baden, emigrated to the United States in the 1850s.  Working initially as a machinist, he gravitated to New Ulm, Minnesota, where in 1860 he founded his brewery.  Today it is the second oldest family-owned brewery in America after Yuengling.  It celebrated its 150th anniversary in 2010. 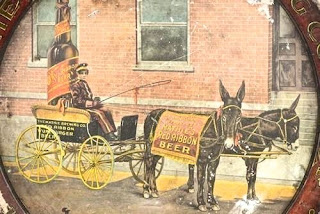 The Mathes Brewery wagon clearly was meant for show, not for hauling.  The big bottle was advertising the company’s Red Ribbon Beer, a Wurzburger lager.  Rather than horses, this rig is being pulled by a pair of mules who seem on this
serving tray to be dozing.  The tray was issued by Herman A. Mathes, a Burlington, Iowa, producer of beer, soda water and mineral waters.  He was in business, according to directories, from 1892 to 1919, closing with the advent of National Prohibition. 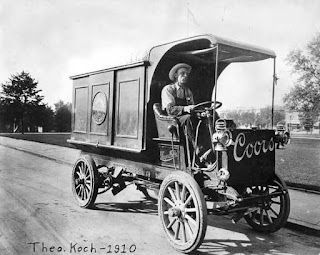 The next image helpfully has been labeled 1910, a time when motorized vehicles were replacing animal-drawn wagons.  Note that this Coors van has the steering wheel on the right side of the carriage.  It took a while to get automotive details straightened out.  The Coors Brewery got its start in 1873 when German immigrant Adolph Coors with a partner started a brewery in Golden, Colorado, using a recipe for a Pilsner-style beer.  Coors safely survived Prohibition by diversifying its products. 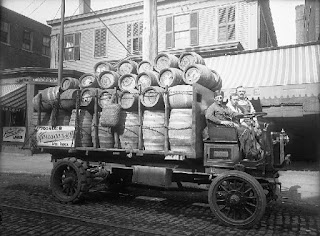 The next photo seems to be trying to prove how much beer could be carted at one time.  Any severe jolt might well have those unsecured barrels at the top cascading down on the three workers.  The information with the photo indicates that the truck was hauling ‘Gansett’ down cobblestone streets in New Bedford, Massachusetts.  The beer itself was the product of the Naragansett Brewing Co., founded in 1890 at Cranston, Rhode Island.  Subsequently it became the largest beer producer in New England. 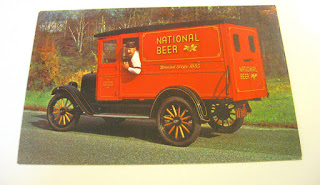 Still a pre-Prohibition model, the next van marked a definite improvement.  It shielded the driver from wind and rain, allowing him to assume a dapper pose with bowler hat, mustache and sleeve guard.  He was driving for National Brewing Company, and likely imitating “Natty Bo,” the longtime symbol of the beer.  Founded in Baltimore in 1872 and operating until the late 1970s, this brew was very popular with the college crowd during the 1950s and 1960s, largely because it was could be had for about fifty cents a bottle. 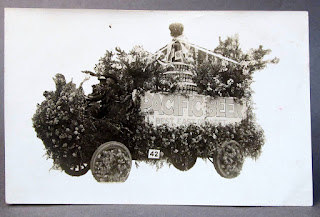 Although it is hard to tell, I would put the vintage of this Pacific Beer truck at pre-Prohibition given its hard rubber wheels.  It obviously has been decorated with flowers for a parade, clearly NOT the Pasadena Rose Parade.  The Pacific Beer & Malting Co. was established in Tacoma, Washington, in 1888.  Founders were Scholl and Huth who turned out 260 barrels of beer a day.  The brewery filled a need in Tacoma because beer transported from the East, likely by rail, often lost freshness. 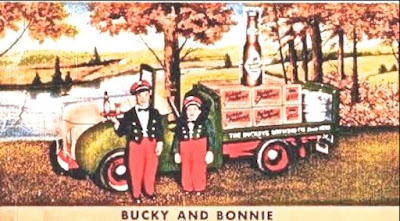 The Buckeye Brewery of Toledo, Ohio, for years featured a waiter with a large head and small body.  Then one day in a bar a brewery executive found Carl Walinski, who not only was a dwarf but also one that could roller-skate.  He became the living symbol of Buckeye beer for years.  Walinski was even given a 3 foot, 6 inch “wife,” called Bonnie.  Although they were not really married, the pair often appeared together before the public, driving up in their miniature beer wagon.

Moving from the ridiculous to the streamlined, here is a Miller High Life Beer delivery van from 1941.  It was a specially configured Dodge constructed by the H. Barkow Co. of Milwaukee and likely designed by Brooks Stevens, a Milwaukee industrial designer.  The sleek lines were entirely in keeping with the “art deco” styles that were sweeping the nation.  By sculpting the vehicle’s curves, moldings, fenders and paint scheme, the illusion was created of length and decreased height over a relatively short wheel base.

Given the competition among Milwaukee brewers, Miller almost certainly was reacting to a streamlined fleet of insulated delivery vans maintained by the Schlitz Brewery.  They had been crafted from 1838-1939 Dodge Airflow trucks. Schlitz obviously was not about to let Miller get a jump in the streamlining game and hired the General Body Company of Chicago to design an even jazzier looking vehicle. The same outfit that gave Oscar Meyer its motorized weiner, General Body in 1941 came up with the eye-stopping design shown here.  By that time World War Two had begun, however, and the model never got off the drawing board. 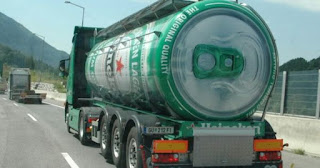 Our final brew hauler is a semi carrying a giant can of Heineken Beer.  This rig appears to take beer-hauling to its pinnacle — one giant metal tank holding thousands of gallons of golden liquid on its way to a bottling plant.  Boasting a pedigree in Holland back to 1592, Heineken was the first European beer to be imported into the U.S. after Prohibition was lifted in 1935.

There they are, eleven ways of transporting beer, some antiquated, some quaint, some purposely absurd, and some strikingly well-designed.  These vehicles all served a purpose, most for getting the products of a brewery to a thirsty public, a few for advertising the product.  They all, however, rolled on wheels.