From time to time this blog has featured fancy liquor jugs, but those were issued by distillers, whiskey “rectifiers” (blenders) and wholesale dealers, almost always over a period years.  Not so with the highly valued ceramics shown here.  Bulkley-Fiske & Co. broke the mode. The New York City grocery company produced them and did so over a period of four years (1858-1862). 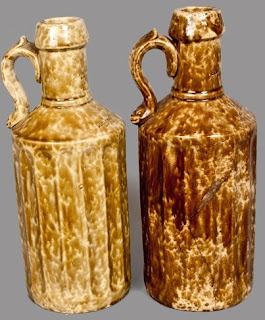 The pair of cruet-like jugs shown above are in a “Rockingham” glaze, both a tan and a darker brown.  That attractive marbled look was highly popular in the United States during the early 1800s, copied from British glazes with a similar look.  A pottery in Bennington, Vermont, was particularly famous for the glaze but other U.S. firms also could replicate it.  Those ceramics normally was used for tableware and candle sticks — not to hold liquor. 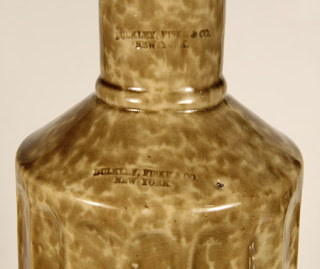 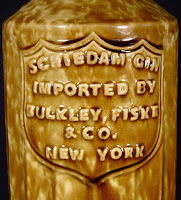 These pint-sized jugs were held gin when they were sold.  A shield on the front of each container says:  “Schiedam Gin Imported by Bulkley, Fiske & Co.”  The name of the firm and the address also was impressed into their shoulders.  There was no mistaking by whom these vessels were issued. 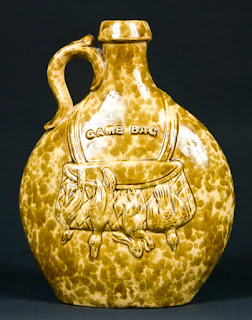 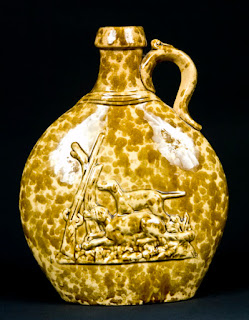 Even more impressive is a whiskey jug with a similar handle and top and also in a Rockingham glaze.   Entitled by the company “Game Bag,” each side has a bas relief picture.  One side is the game bag with four dead quarry hanging from it, from left, pheasant, duck, rabbit and dove.  The other side is another hunting scene featuring two dogs and a standing shotgun.  A British “hunting jug” influence is evident. There is a variant on this jug that marks it with an embossed “B.F. & Co.” on one side and an incised “Bulkley. Fiske & Co., New York” on the other.
From 1820 to 1856 figural “spirits” flasks were a popular ceramic item in England. Made in the shape of important personages often they were in the shape of personages of royalty or important political figures.  Often the latter were involved in reform movements and such items sometimes are called “Reform flasks.”  William F. Bulkley and Frederick B. Fiske brought these bottles to America to hold liquor, likely whiskey. 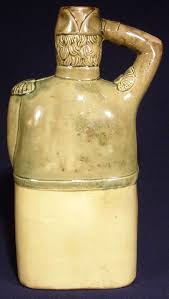 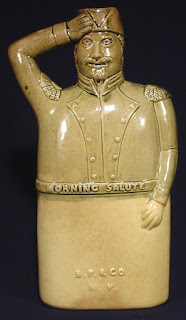 Shown here, front and back  is a jug made in the likeness of military man.  From the shoulder epaulets and tunic we may infer he is an officer, perhaps a high-ranking officer.  His belt reads “Morning Salute,” a reference that would have been widely understood.  Many men would take a snort of whiskey every morning before going off to work, believing that it was beneficial both to health and mental wellbeing.  H. L. Mencken wrote of his father in this tradition taking a shot of Maryland rye daily before heading to his office.  The grocers only provide initials of their name and address on this vessel. 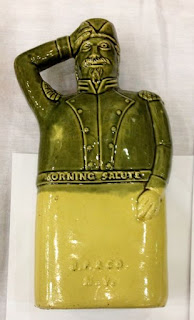 “Morning Salute” come in two styles, a second version being toned, brown glaze on top and tan below.  When this jug went up for auction the catalogue listed it at: “Extremely rare, the only example we have ever seen…”  and put the estimate of value at $4,500.  If received it certainly would mark a record for an American whiskey jug. 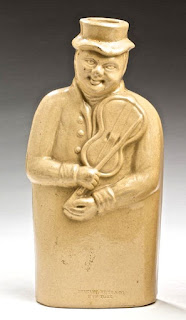 From the archives of the New York Historical Society comes another example of a Bulkley-Fiske figural flask.  This one is called “Man with a Fiddle.”  This bottle is the standing form of a man sticking his tongue out, in perhaps a smile.  His battered hat is the spout.  He is wearing an overcoat and holding a violin and a bow against his chest.  Might he be an itinerant fiddler?  Unlike the soldier figurals, Bulkley, Fiske & Co., etc., is impressed in the base. 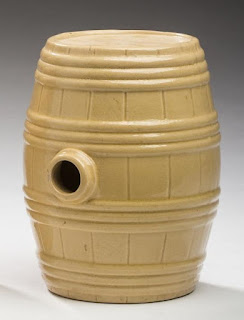 While the last of the grocery firm’s ceramic offerings is lessarticulated than the others shown here, it is still interesting.  It is a barrel or keg — some have called it “a rundlet.”  It features a sizable “bung hole” aperture from which the beer, wine or whiskey could be accessed.  Note the well-developed four sets of three bands each that hold the barrel staves.  This ceramic bottle obviously held a quantity of spirits, but it is not clear what kind.

I wonder at the imagination that fostered these items during the mid-1800s as the Civil War was beginning.  Obviously the individuals responsible — Bulkley, Fiske or someone else — were influenced by British models.  After Bulkley’s death in 1859 the firm stayed in business only until 1862, a four-year run.  Nonetheless in that short period, this New York City grocery left a legacy of liquor containers unmatched in their rarity and collector interest.