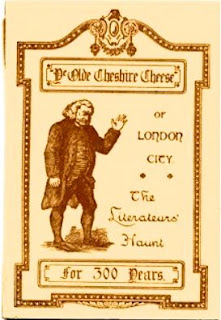 On this blog in May 2010, I related the story of how the renown British writer and encyclopedist, Dr. Samuel Johnson, while living a few steps from the famous Cheshire Cheese tavern in London, cannot be identified as ever having stepped foot in the place despite the assertions of the proprietors.  But why?  The answer has remained a riddle but recently I may have found the answer.

Shown here is a soft-covered booklet, known as the “Book of the Cheese,”  that celebrated 270 years of this watering hole.  The cover contains an illustration of a man who is recognizable as the great English encyclopedist and sage of the 18th Century,  Dr. Samuel Johnson.  Inside, the volume proclaims:   “…We have one specimen of the Johnsonian traverse remaining practically the same as it was in the Johnsonian days, we can still depict for ourselves, with but the slightest effort of imagination, what must have been the scene at the Cheshire Cheese in the Doctor’s time.  Johnson is there in his favorite seat, mouthing and talking….”

It was with a great deal of anticipation, therefore, that transiting through London but with some free time there, that a colleague and I ventured to the Cheshire Cheese for lunch in 1990.  The place was redolent with memorabilia of Johnson.   After lunch we literally went around the corner to Johnson’s home in Gough Square, now a museum.  When I told the curator that we had just come from the great man’s favorite tavern, he clearly was annoyed and said:   “There is no evidence he ever stepped inside THAT place.”

Upon returning home, I did considerable research on Johnson, who was known to love the tavern atmosphere for good talk and conviviality.   The curator was right, outside of the Cheshire Cheese’s own claims, there is no evidence from Boswell and other biographers that Johnson actually did frequent the pub.   But why? 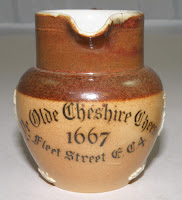 The answer may lie in some ceramics that recently were unveiled to the public by the British Museum.  Over the years, the Cheshire Cheese has issued dozens of ceramic souvenirs, items ranging from whiskey jugs and beer mugs to tea cups and salt and pepper shakers.  As I write this, I am looking at the original of the small creamer shown here.  In brown stoneware with white embossed decoration it bears the mark of Royal Doulton Pottery.   The recently displayed ceramic items, however  are considerably different. 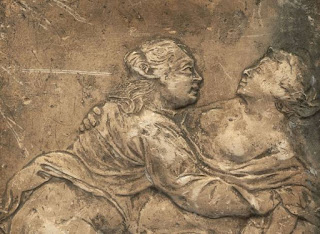 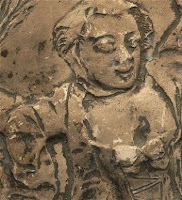 These ceramics, in the form of bas relief tiles, were discovered in 1962 after a fire in an upper room of the Cheshire Cheese.   There are eight of them, all erotic, detailing various sexual positions and even a spanking.  Given to the Museum of London, they were sequestered for more than half a century in a basement room.  As a sign of changing attitudes in England for the first time in 2014 they were put on display for the public viewing — but then only for a limited period over Valentines Day and open only to those over 18 years of age.  The London Museum curator, Jackie Keily explained:  “We can’t normally display them because they are so graphic.   It is a fascinating glimpse into the sexual history of London; so few of these artifacts survive.”  The title of the exhibition was “Late London: City of Seduction.” 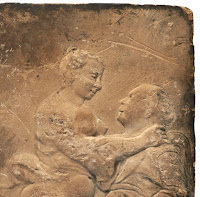 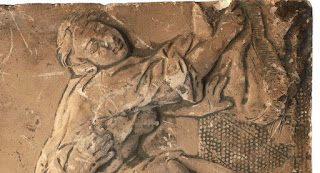 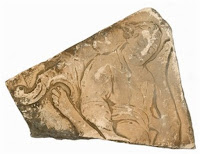 Why were these items found in Ye Olde Cheshire Cheese?  Those upstairs rooms may have been used as a brothel or a men’s drinking club where prostitutes were readily welcome.  Experts hypothesize that the tiles would have been kept behind wooden panels and brought out as the occasion demanded, perhaps to stimulate the conversation and perhaps the behavior of the occupants. 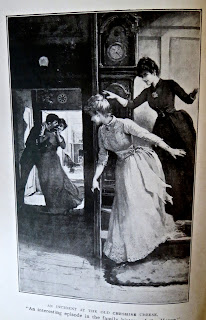 Nothing in any of the Cheshire Cheese promotional materials hints at anything like that taking place during the 18th Century.  However, an illustration in the Book of the Cheese suggests a bit of “hanky-panky.”  Entitled “An Incident at the Old Cheshire Cheese,”  and depicts “an interesting episode in the family history of the house.”  It shows two comely young women coming up on  man, apparently named William,  who seems to be forcing his attention on a third woman.  William’s room is said to be “in the distance.”  Why are these women staying at the Cheshire Cheese?  What part do they play in the tavern’s “family history?”

To my thinking, the tiles may hold the answer of why Johnson was not a patron there.  He was notable for his prudish attitudes.   His biographer, Boswell, a libertine, notes the doctor lecturing him with a “prudish face.”   Johnson’s encyclopedia omits most terms for bodily functions.  A story, possibly apocryphal, has him approached by a woman who commended  him for leaving out “all naughty words" in his encyclopedia.  Dr. Johnson is reputed to have replied, “Madam, I hope I have not daubed my fingers.”

If Johnson knew what was going on in the upper rooms of the Cheshire Cheese, and one suspects that much of London knew, then he likely would have avoided the premises.  As a result, The Book of Cheese, with its incessant references to Dr. Johnson, might better be called the “Book of Swiss Cheese” because it has so many holes in it.

Posted by Jack Sullivan at 6:10 AM