Note:  Because my “down memory lane” posts on, first, soft drinks, and then candy, have received an extraordinary number of visits, it occurred to me to reminisce about comic strips that have had particular importance to me over the years, some of them, indeed, imitating life.

I have been a fan of the comics even before my ability to read, badgering relatives to read them for me.  The first “Superman” comic book, the cover shown right, appeared in June 1939, just about the time I was able to read on my own.   Like kids all over America during those years of World War Two, I was enthralled by the “Man of Steel,” who regularly was thrashing the Fascists.  That could be me in the picture left, able to “leap tall buildings in a single bound.”  My cape was nowhere as nifty, however, just an old dish towel my mother furnished, bound at the neck by a large safety pin.  Nevertheless, as I recall, I ran around with it on for one whole summer, 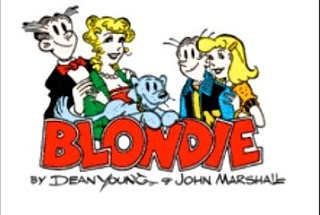 “Blondie” may be the longest running comic strip in America, published in the newspapers since 1930, eighty-five years ago. I have been reading it for seventy.  Created by Cartoonist Chic Young and carried on by his son, the characters in Blondie have grown older by millimeters through the decades.   The scenes are the same:  Feckless and sandwich-loving Dagwood clashing with his irritable boss, Mr. Dithers; or conniving with or against his neighbor, Herb Woodley; or taking gentle rebukes from the ever-patient Blondie.  Timeless, the strip continues to delight. 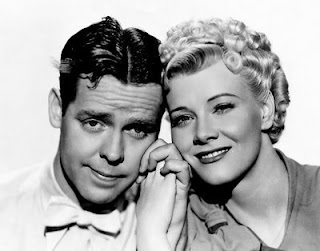 My personal memory is of being in Hollywood in 1948 and sitting in the audience for the popular "Blondie" radio program that ran from 1939 until 1950.  The stars were Arthur Lake and Pennie Singleton as Dagwood and Blondie, shown above.  They played the same roles in movies.   The script writer for the radio show was a family friend from my Dad’s home town.  After the show we got a chance to meet him and Penny Singleton.  A thrill for a 14 year old. 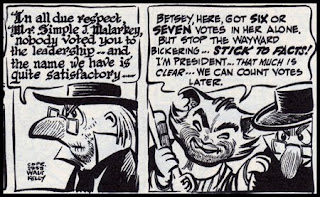 While attending college in Milwaukee, I had an opportunity once to come up close and almost personal with McCarthy.   About 1954 the then Vice President Richard Nixon came to the Student Union at Marquette University to make a speech.  Senator McCarthy, by then in the doghouse with the Eisenhower Administration, plunked himself in the front row.  As a reporter for the student newspaper, I followed both men closely out of the building and saw Nixon give McCarthy a swift brushoff and jump in his limousine to avoid a conversation.  A telling moment.  The photo of Joe bears a striking resemblance to Walt Kelly’s likeness. 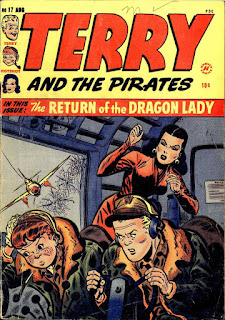 “Terry and the Pirates” was another early favorite of mine, with Terry and his buddies: Hotshot Charlie, his irreverent co-pilot; Big Stoop, a nine foot tall Mongolian; and, of course, the evil and feared Dragon Lady.  She is shown here menacing Terry and Charlie as they evade enemy aircraft.  Little did I know that later in life, as a staffer in the House of Representatives, I would meet her in the flesh.

Shown left, her name was Anna Chennault, Chinese-born and the widow of an American war hero.  Living in a luxury Watergate apartment overlooking the Potomac River, she often visited the Congress to press her views and was widely known as the Dragon Lady.  In 1968, allegedly at the behest of Presidential Candidate Nixon, Ms. Chennault was reputed to have dynamited proposed talks between the United States and North Vietnam that might have shortened the Vietnam War war as much as seven years. 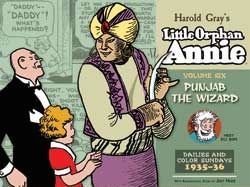 Another early comic strip favorite was Harold Gray’s “Little Orphan Annie.”  Later I would find its highly conservative messages from Annie’s “Daddy Warbucks” as distasteful, but initially was fascinated particularly by one character, called “Punjab the Wizard.”  Dark-skinned and wearing a turban, Punjab not only was a fierce fighter but had a magic cape he spread over enemies, a magic tunic that either took them away for good or brought them back limp and scared.  That cape would have come in handy to use on some kids I knew. 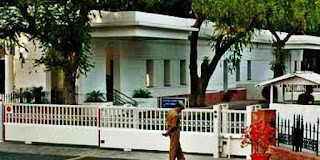 Little then did I know that I would encounter a living image of my childhood hero.  In 1978 I was a minor part of a U.S. delegation visiting the Prime Minister of India.   After driving to No. 7 Race Course Road and the dwelling shown below, we were ushered in and we were told we had 15 minutes to talk.  A figure dressed like Punjab, seemingly as big, and wearing a sword, escorted us into the meeting room and stood guard over the proceedings after the Prime Minister arrived. It was hard to take my eyes off him. I did not see the magic cape but imagined that if we overstayed our welcome, it quickly would have materialized.  We finished in 14 minutes and exited without mishap. 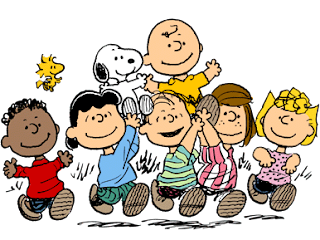 The final comic strip is my now and always favorite, “Peanuts.”  Having just finished an excellent lengthy biography of Charles Schulz,  I better understanding how the cartoonist’s frequently unhappy childhood and married life gave the bittersweet tang to the panels.  Shulz caught something about the angst and uncertainties of childhood and made them poignant and funny at the same time.  Although Schulz
died in 2000 and no one else is drawing the strip, the re-runs can last a long, long time and continue to be a daily treat.

Having read the comics every day for more than 70 years, I am struck by how often the images and messages they convey are replicated in real life.  As the anecdotes above indicate, I am not infrequently cast back into the “funny papers” by events that have occurred over the years and suspect similar incidents have happened to other fans of the comics as well.