The Spanish American War Through the Glass

After we have dragged through seemingly endless wars in Iraq and Afghanistan (and earlier Vietnam)  an  American war that lasted only three months, two weeks and four days, might seem an impossibility.  That, however, was the duration of the Spanish-American War that began this month 117 years ago.   Despite its short duration, the conflict was an important event in our national history.   Moreover, it generated any number of memorabilia that continue to be of interest to collectors.   Those artifacts include a great many items made of glass and are the subject of this post. 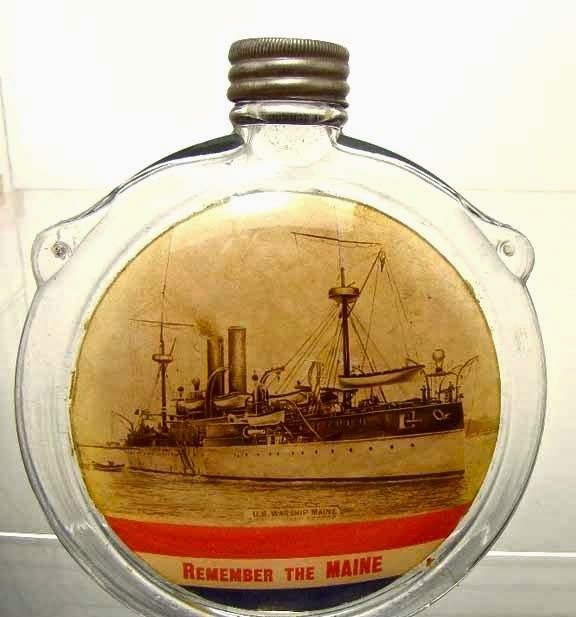 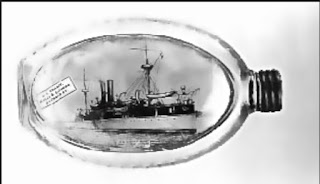 As a result many Spanish-American War souvenirs depict the ship that launched the cry for war against Spain.  Shown here are two items both featuring a similar photograph of the Maine. They are often characterized as “label under glass” bottles.  One is a flask;  the other is a canteen, with holes for a strap to loop through.  The bottles were blown in mold, the picture inserted, and another layer of glass fit over the front.  This insured that the illustration was left intact so long as the glass is not broken. 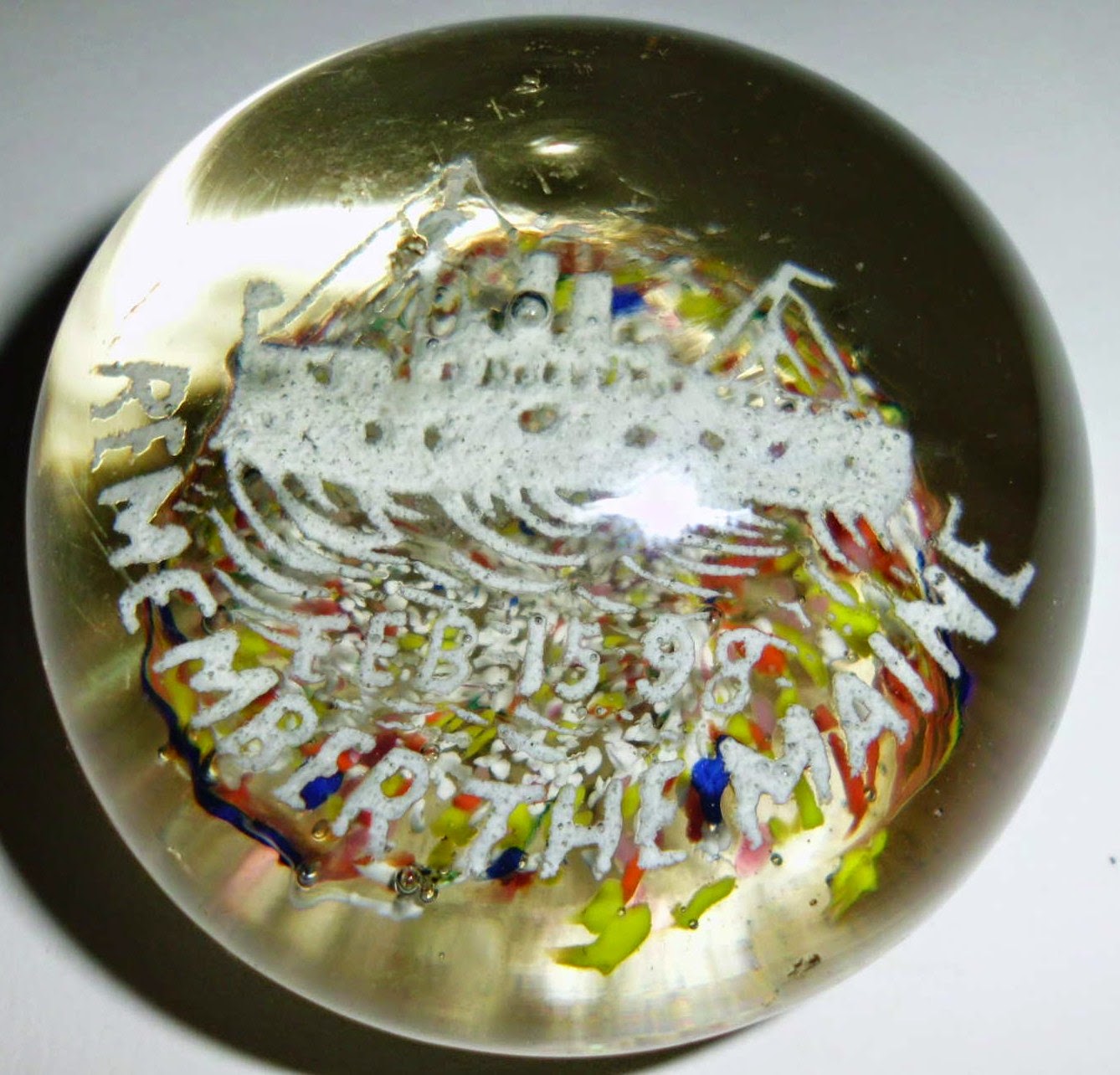 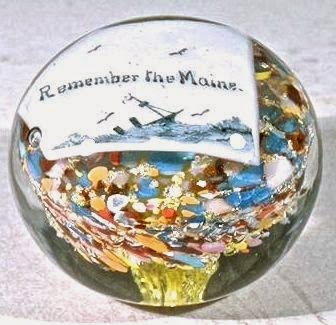 Yet another familiar war souvenirs and Maine memorials were glass paperweights.  The war occurred during the peak years of American paperweight production as glassblowers made them either as part of their job or as lunchtime and after work diversions.  Although neithe weight shown here were signed by their maker, both contain the familiar war cry and illustrates the Maine heading to the bottom.  The weight at left has only a crude representation of the ship, done in white, with wavy lines indicating its passage downward.  On the second at right, the seas seem to be boiling up around the ship, of with only two smoke stacks and a mast  visible.

The Maine incident could decorate even mundane objects.  Two shown here, for example, involved mustard,  The one at left is a lidded clear glass mustard jar on which has been embossed a representation of the ship sinking while smoke rises in the air.  Cuba’s Morro Castle is embossed on the other side.  At right is a mustard dish with the Battleship Oregon represented in milk glass.  The Oregon was a Navy battleship that took part in the naval battle of Santiago de Cuba.  Fast enough to chase down and force the surrender of a Spanish cruiser, the ship gained the nickname “Bulldog of the Navy.”  The mustard could be found by lifting the top of the dish. 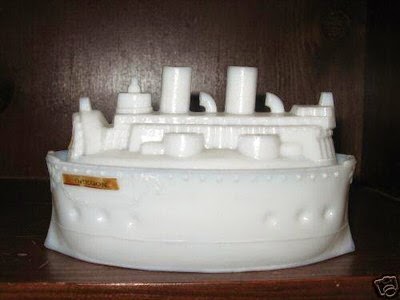 Another favorite war theme was the cooperation between the U.S. Army and Navy in routing the enemy, both in Cuba and in the Philippines.  This supposed camaraderie was captured in an illustration of a well accoutered soldier shaking hands with a sailor whose sword is posed perilously close to the solder’s knee.  The image, again a label under glass, can be found on several bottle shapes, including canteens and flasks. 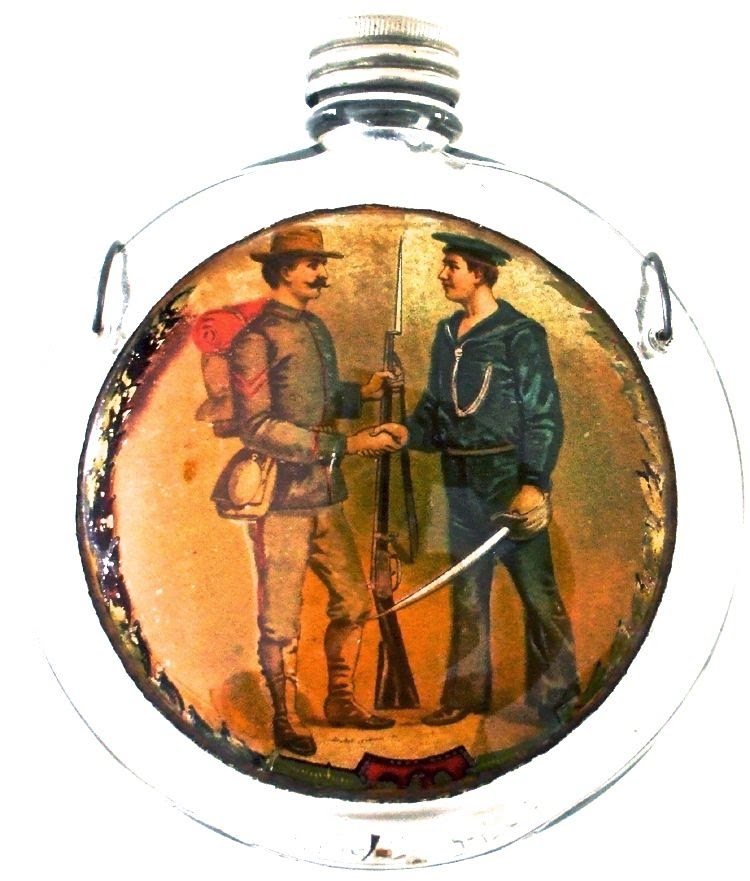 Although the common fighting man got some recognition for his service, the greatest adulation was reserved for the victorious officers.  Admiral George  Dewey had arrived in Manila Bay, the Philippines, with the U.S. Pacific fleet early in the conflict.  He found a large number of Spanish ships anchored there and sank all of them in the ensuing battle.  Not long after 11,000 Army troops stormed ashore and captured Manila. 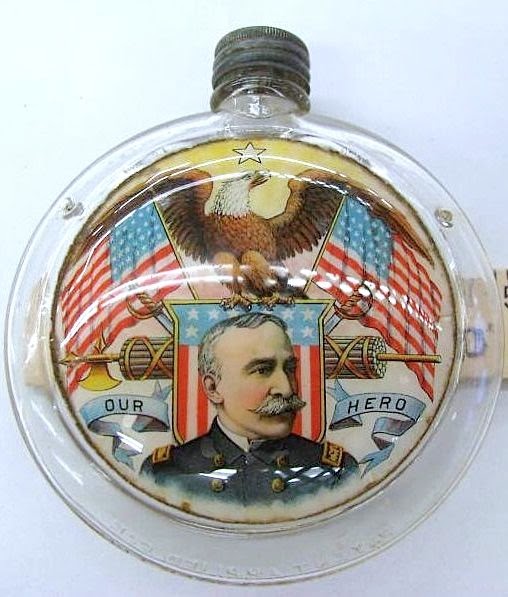 Both Dewey and Rough Rider Theodore Roosevelt (whose souvenirs are elsewhere presented on this blog) emerged as the uber heroes of the war.   The flask shown here makes that clear with the patriotic symbols that surround the admiral, as well as the motto:  “Our Hero.”  This is an excellent example of a label under glass bottle and how it can preserve colors.  Dewey’s image also could be found on less decorative items, such as the drinking glass shown here. 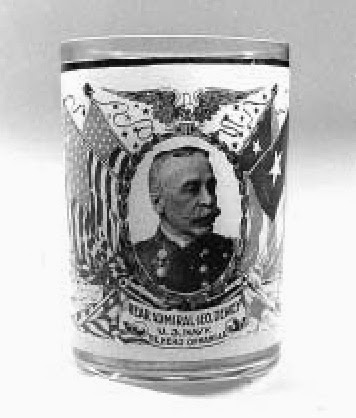 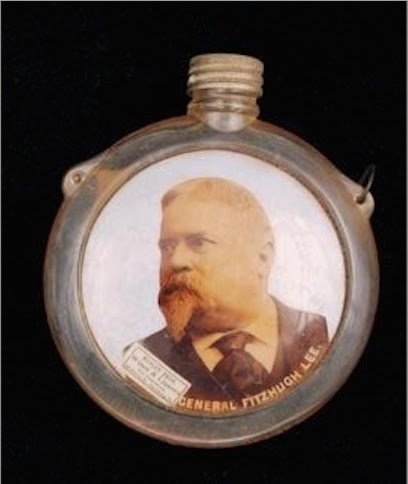 The final label under glass canteen memorializes a most unusual man to be honored for his service.  A cousin of Robert E. Lee, Fitzhugh Lee had fought Union troops as a Confederate cavalry commander. Indeed, near the end of the war he headed of all the rebel horse soldiers.  Fitzhugh had redeemed himself sufficiently by the late 1900s that President Cleveland appointed him U.S. consul-general in Havana.   He was retained in the post by McKinley and lived in Havana through riotous days in Cuba, including the sinking of the Maine.  Upon the declaration of war between Spain and the United States, he re-entered the army.  By this time, however, he had grown so heavy that he hardly could fit on a horse and his duties were largely administrative.  Even so, good old “Fitz” Lee was swept up in the patriotic fervor the day and awarded his face on a label under glass canteen.

Because the Spanish-American was a short war, it did not produce as much memorabilia as other U.S. conflicts before or since.  Still, the conflict has its place in American history and the glass memorabilia shown here testify to the high emotions it engendered.

Posted by Jack Sullivan at 1:23 PM