Well, not exactly.  Most of the faces shown here at one time really DID snatch the caps of beer, wine and soda bottles.  That is what they were designed to do.   They are in the tradition of the varieties of cast iron openers that I featured as “vernacular art” in a post in June 2011.  That article has had the most “hits” of any on this blog (2,440 as of this date). One difference is that the openers shown below all sport the faces of famous people, including national leaders, politicians, artists and one rock star.  Moreover, these openers are available for purchase from their creator.

His name is Stephen Maxon and he maintains a website called “Max-Cast Sculpture and Foundry Services.”   Shown here, Maxon provides a whimsical story about himself along with a few salient facts.  He has a master’s in fine arts (MFA) from the University of Iowa, he belongs to the American Craft Council, and his work has been shown in galleries scattered from New York to California.  Of himself he concludes:  “After years of study and toil, Maxon renounced his MFA to become an outsider artist.  Finding casting much less difficult than bending steel bars with his teeth, he developed new ways of melting medal via thought control…After making and losing several fortunes, he currently lives in a trailer in rural Iowa receiving messages from outer space in his dental filings.” 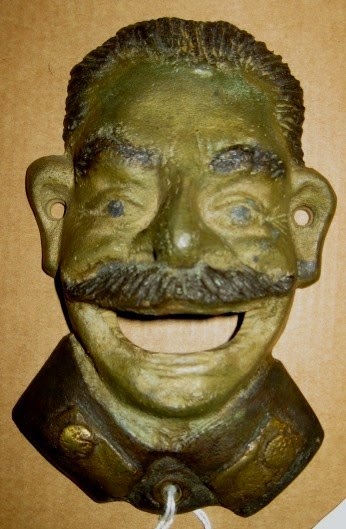 As noted in my 2011 post, figural bottle openers are a post-Prohibition phenomenon, meant to be attached with screws through holes in the ears to a vertical wooden surface. A bottle of beer or soft drink can be inserted into the mouth cavity, pulled down and the cap removed.  In dealing with the famous subjects of Maxon’s vernacular art, I have decided that, rather than dwelling on their careers, to examine their beverages of choice and when possible provide their recipes (in bold).

The first personage shown here is Joseph Stalin (1878-1953), the brutal dictator of the Soviet Union from the mid-1820s until his death.  As might be expected, Stalin’s drink of choice was vodka.  Legend has it that his father used to give the baby Joseph a cloth soaked in vodka rather than a pacifier.  As adult Stalin is said to have imbibed vodka daily. 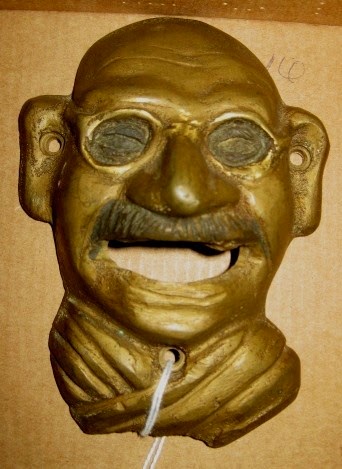 The next face is that of Mohandas Karamachand Gandhi (1869- 1948), the preeminent leader of the Indian independence movement in British-ruled India.  A strict vegetarian, Gandhi is said to have favored “nourishing and non-violent drinks like juices and squashes.”  He found intoxicating drinks abhorrent and a social malice because he believed they acted as deterrents to humankind’s inter purification and spiritual evaluation.  On the other hand, there is some evidence that like other Hindus he may from time to time imbibed his own urine. 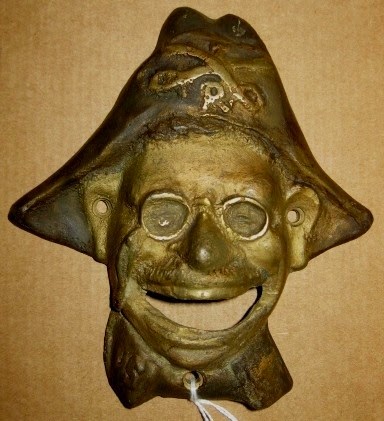 The man with glasses sporting a hat with crossed sabers is “Rough Rider” Theodore Roosevelt (1858-1919), the 26th President of the United States.  Teddy liked mint juleps, using fresh mint from the White House garden.  He reputedly used the promise of that drink to entice Cabinet members to play tennis with him.  Roosevelt’s recipe: 10 to 12 fresh mint leaves crushed in sugar water,  2 or 3 ounces of rye whiskey, 1/4 ounce of brandy, stirred and garnished with fresh mint sprigs.

Maxon also has featured painters of note.  Shown here are two faces of Pablo Picasso (1881-1973) one painted and one left plain.  As for the famous artist’s drinking habits, I will quote something Wiki Answers gave to the question ‘Was Picasso retarded?’. The reply: “Picasso was not retarded. Picasso was drunk and high on absinthe, which gave him great inspiration for his work. Though, his absinthe addiction also drove him to insanity.” Picasso’s reputed last words were: “Drink to me, drink to my health. You know I can’t drink anymore.”

Although Picasso probably would not have enjoyed having his mouth used to decapitate bottles, his colleague,  Salvador Dali (1904-1989), below, would do almost anything to get his face and figure before the public,  apparently believing that any kind of publicity was good.  He invented a drink he called the “Casanova Cocktail.”  The recipe: One tablespoon of Campari bitters, one teaspoon of powered ginger, six tablespoons of brandy, and a pinch of Cayenne pepper. Combine the ingredients and put in the freezer.  After 30 minutes remove the contents and add the juice of one orange.  Stir and drink. 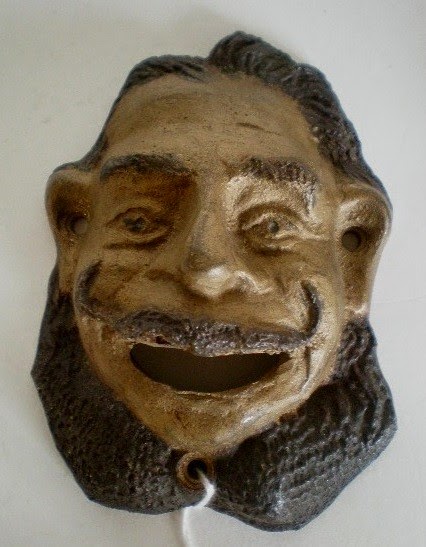 Of this concoction, Dali claimed: “This is quite appropriate when circumstances such as exhaustion, overwork or simply excess of sobriety are calling for a pick-me-up. Here is a well-tested recipe to fit the bill. Let us stress another advantage of this particular pep-up concoction is that one doesn’t have to make the sour face that usually accompanies the absorption of a remedy.” 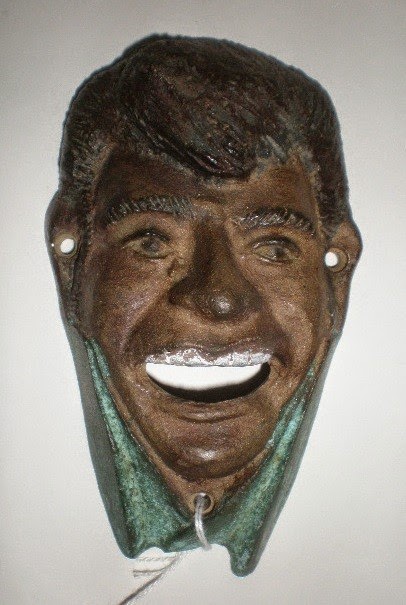 Elvis Presley (1935-1977), although presumably the victim of a drug overdose, has the reputation of not being a regular drinker of alcohol.  His favorite beverages are said to have been Pepsi Cola and Mountain Valley Water.  The facts not withstanding, several alcoholic libations have been invented in the memory of the King of Rock and Roll.   One Elvis Presley Cocktail was unveiled recently on the 80th anniversary of his birth.  The recipe:  One ounce of vodka, 3/4 ounces of hazelnut liqueur, 3/4 ounce of Bailey’s Irish Cream, and 3/4 ounce of creme de banana.   Pour the ingredients into a shaker tin with ice.  Shake well and strain into an old fashion glass with ice.  The assumption is that this drink will taste just like a peanut butter and banana sandwich.  That was Elvis’ favorite. 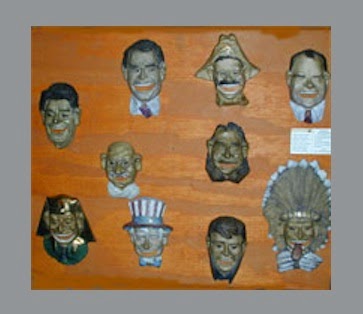 Other Maxon creations can be discerned from the final illustration showing a range of personalities in painted cast iron.  Among them I recognize Ronald Reagan, George Bush,  John Kennedy, Richard Nixon, and maybe George Romney.   The artist sells these bronze polychrome bottle openers for $83.00 each.  With a door knocker tongue inserted they are $94.00.  He also features other sculptures in cast iron and bronze, the bottle openers being among the least expensive.  One creation called “Bonsai Bass” fetches $4,500.  You can buy a Maxon opener and a whole lot of beer for that outlay of cash.