Time was during the 1970s, I was enamored of the “Futurists,”  pundits who were keen on telling us what the future of the United States and the world would be like.   I eagerly read many books on the subject but gradually wearied of the rampant speculation.  It reminded me how rut-bound the thinking often is behind such projections as the result of perusing a series of trade cards called “One Hundred Years Hence,” issued about 1900 by the Maher & Grosh Cutlery Company of my home town, Toledo, Ohio.

The cards purported to show the wonders that would greet Americans by the year 2000.  Several of the predictions have been, in fact, realized.  Others bear a slim resemblance to 20th Century inventions — but not as depicted.   A third group appear utterly absurd from a contemporary perspective.  Unfortunately, none of the folks responsible for these cards are still around to explain to us what they might have had in mind. 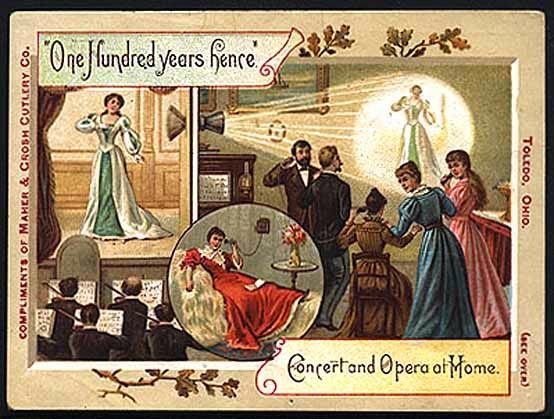 We begin by with a card that predicted that we would be able to enjoy concerts and operas without leaving home.  The artist could not have known about television which was not invented until the mid-1930s but the basic idea was there:  A picture is transmitted from where it is occurring and seen through a mechanism on the wall.  Unfortunately, rather than concert and opera what the folks at home are watching today are “reality” shows and football. 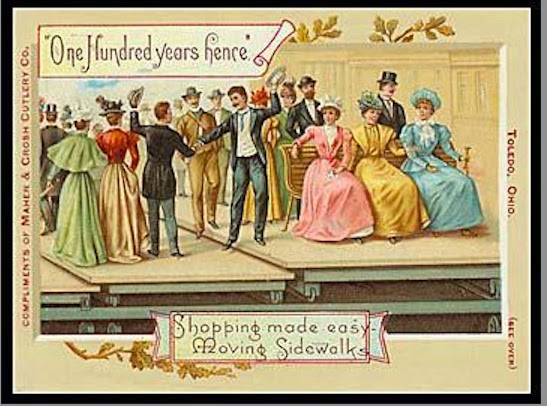 The next card suggested that moving sidewalks would be a feature of the future, making shopping more easy.  Although the design shown is strange, moving sidewalks have become reasonably common in shopping malls and airports, including moving staircases.  Of course, shopping has been made even easier by  outfits like Amazon that allow the shopper to make selections while sitting in front of a computer in the comfort of home. 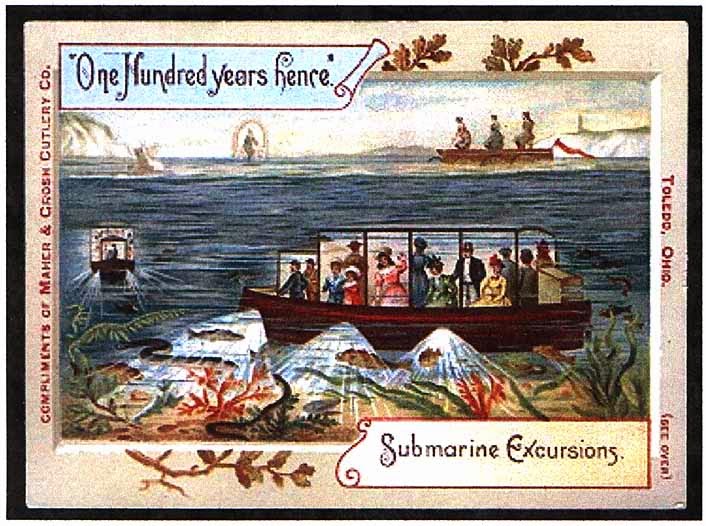 Submarine use for under sea excursions to allow passengers to view marine life have been common at tourist destinations for a long time.   My wife and I have taken one of these vessels during a holiday off Waikiki Beach in Oahu, Hawaii.  Unfortunately the Pacific water column gave us only one kind of fish.  Disappointing — but the experience was interesting.  Although the sub shown on the card here was an unrealistic design for an underwater craft, the artist had the right idea. 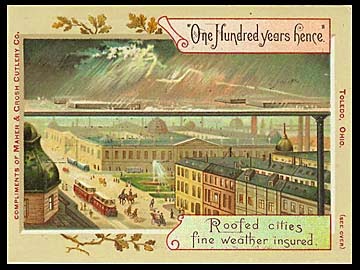 The next card touting “roofed cities” to insure fine weather reminded me of the TV series, “Under the Dome,” a science fiction thriller that suggested a roof over a city might not be a very good idea.  The concept, however, has been carried to fruition in the many roofed shopping malls around the country.  The Mall of America in Bloomington, Minnesota, for example, has a gross area of 96.4 acres, enough to fit seven Yankee Stadiums inside. More than 530 stores are encompassed.  That mall would seem to qualify as a small city. 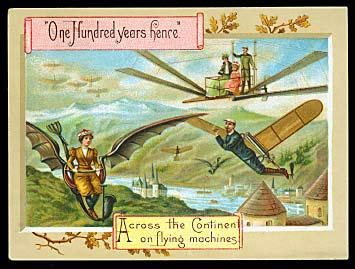 Only three years after the card above was issued, the Wright Brothers had made the first successful manmade flight in history at Kitty Hawk, North Carolina. The “flying machine” at left bears only slim resemblance to early airplanes.  The other craft are purely flights of fancy.  The possibility of human flight was a source of constant fascination at the turn of the 20th Century.  The suggestion of crossing the North American continent by aircraft, indicated by the card, is borne out every minute of every hour. 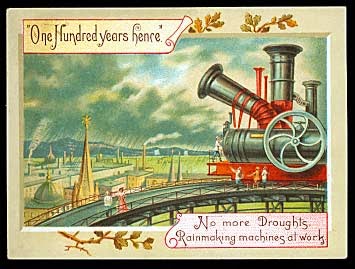 At this point we leave predictions that more or less have come true and move into the realm of ideas that might have seemed logical at the time but proved to be problematic.  The first, above, was prevention of drought through rain-making.   The rain-making machine dwarfs the humans standing beside it.  How it would have worked is open to speculation. In 1892, a Washington, D.C. lawyer got Congress to give him $10,000 to conduct rain making experiments in Texas using balloons rigged with explosives, thinking that loud noises would produce rain. It did not work.  Perhaps the machine shown here was to make even louder noises.  Modern rainmaking attempts have proved similarly fruitless.  Droughts continue. 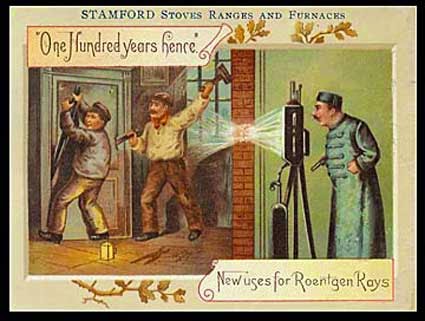 Wilhelm Conrad Röntgen was a German physicist, who, on 8 November 1895, produced and detected electromagnetic radiation in a wavelength range that became known as X-rays and Roentgen rays, an achievement that earned him a Nobel Prize in Physics in 190l.  The discovery caught the imagination of people worldwide and was forecast for many uses.  The one shown on the card above was in police work.  A policeman of the future, curiously dressed like a Chinese scholar, was sending X-rays through a wall, allowing him to catch two bank robbers attempting to crack the vault. 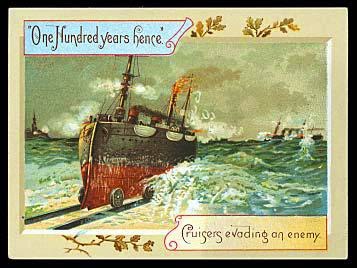 A third prediction of the dubious kind was “Cruisers evading an enemy.”  It is true that amphibious vehicles of various kinds have become standard in the ordinance of nations.  I have ridden in a “Duck,” (DUKW), a World War II amphibious truck for transporting goods and troops over land and water and crossing beaches in amphibious attacks.  After the war they were used in places like the Wisconsin Dells to haul tourists.  The Duck, however, is far smaller and more mobile than a battleship.  As for avoiding an enemy, the ship would have been more vulnerable to their guns on land than on the sea. 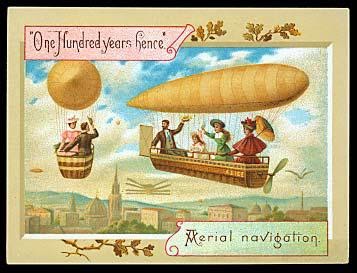 It has been said the invention of the balloon struck the populace of the 19th Century “like a thunderbolt.” (See my post of November 25, 2012.)  This fascination continued through the 1800s, even as the limitations of balloon travel became evident.  None of this seems to have touch the creator of “One Hundred Years Hence.”  Even with the invention of the airplane only months away, the artist has created a scene in which lighter-than-air craft fill the sky. 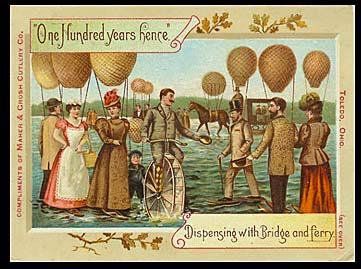 We have entered the realm of the absurd, as demonstrated again by a trade card that purports to foresee a time when bridges and ferry boats will be dispensable.  People apparently would be able to cross rivers buoyed by their individual balloons.   One chap is riding a unicycle with a water wheel attachment.  The illustration is fantasy, not futurism. 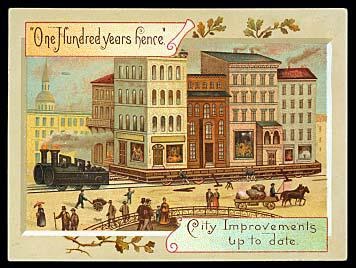 The final image is equally bizarre.  Here we are shown two steam engines towing an entire block of buildings, apparently from place to place.  The caption adds to the puzzle, declaring “City Improvements up to date.”  The card, however, imagines a horse and wagon taking items from place to place, even though motorized vehicles were coming into common use.  So much for the predictive value of  “One Hundred Years Hence.”
This set of trade demonstrates vividly how precarious it is to try to figure out the future from a century away.  In our own time the fascination with “futurism” seems to have ebbed away significantly.  It may be so because the future of the planet appears to hold less promise and more problems, such as those brought about by global warming, air and water pollution, and global pandemics like Ebola and HIV-AIDS.

Posted by Jack Sullivan at 6:55 AM