Steven Moseley’s Religion in a Bottle 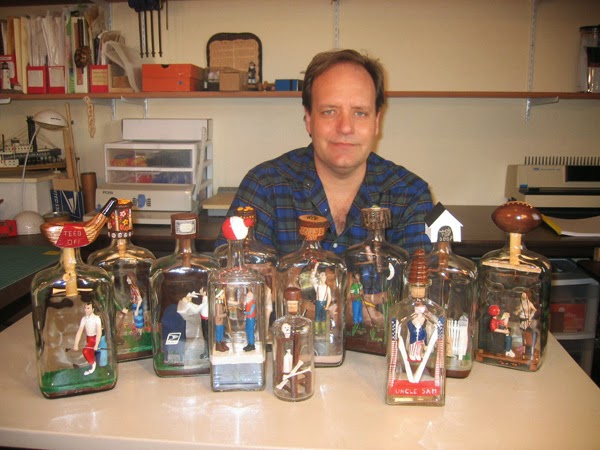 Looking at Steve Moseley’s folk creations -- dioramas in a bottle -- one might suspect him of mocking religion.   My own perception is of a man with a deep spiritual sensibility, a knowledge of Scripture, and a skeptical eye toward the way some live out their avowed Christianity.  A post about Moseley and his work seems appropriate as Holy Week and the Easter Season, 2014, are upon us.

Moseley is a folk artist born in Louisville, Kentucky, in 1964.  He was graduated from the University of Louisville with a degree in chemistry.  There he met his wife, a Ph.D. biochemist.  After a move to Cincinnati, Ohio, a daughter was born.  Steve became a stay-at-home Dad.  Along the line,  he decided he needed a hobby.  An airplane model builder as a youngster, he decided on making ships in a bottle.  He check out several books from the library and taught himself the craft.   Show here is one of his boat creations.  It is the yacht “Yarmouth” and dated 1918.

Demonstrating the care and dexterity with which he created his bottled ships, here is just a part of Moseley’s description of the Yarmouth bottle: The hull of the ship is red on the bottom with the top part of the hull painted black with three thin white stripes. The ship has raised bulwarks painted white on the inside. The main deck is natural wood and is full of features dominated by a large multiple deck extending from mid-ship to stern. These decks are painted white with black portholes painted on. There are eight brown hatches toward the front of the upper deck and two small black stacks with a single red stripe near the top with black rigging lines to secure the stacks. There is a large and very detailed lifeboat mounted on the end of the lower deck. There is a large single black with red stripe smoke stack in the middle of the deck with two large vent pipes on each side. In front of these decks and mid-ship is a two story pilot's steering cabin.

After the Moseleys moved to St. Louis,  a friends suggested that Steve try “whimsey bottles,”  containing scenes from his imagination.  He took strongly to this expression of folk art and has gained widespread recognition through juried competitions, museum exhibitions and a website.  After stumbling on the site recently, I was particularly fascinated by Moseley’s religious themes.  He has done bottles on the “Garden of Eden.”  One shown here features Adam and Eve in front of a modern oven.  I will let Moseley explain what is happening:

Eve has just baked an apple pie and is showing it to Adam, who has his plate and fork ready. In Adam's other hand is the proverbial Apple with a bite taken. For modesty and historical accuracy's sake both Adam and Eve are wearing Fig leafs, although Adam's is somewhat larger. The blue eyed coral snake is hanging from the Apple tree with a cook book in his mouth. There are numerous apples on the ground and two still hanging from the apple tree stopper. 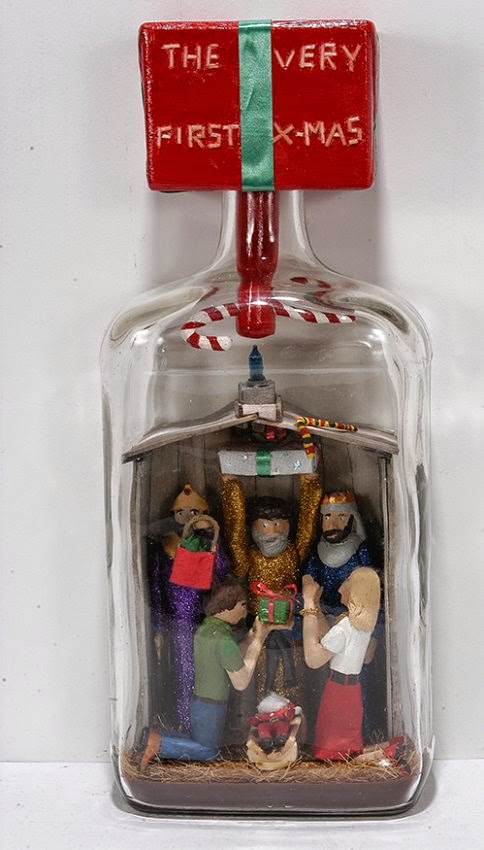 On top of the stove there are two pots with apples in them as well. On the side of the stove is a calendar. The year on the calendar is 4004 B.C. and the month is October. There are no days until the 23rd and the days from the 23rd to the 30th are X'ed out in red ink. All around the scene there are alternating red Tulips and yellow Daisies.

Moseley seems particularly taken with the figure of Jesus of Nazareth.   A bottle shown here celebrates his birth.  But as the artist himself points out below, it is not the Christ Child in the manger, as I had first thought, but Santa Claus.  Under the title “The Very First X-mas” it depicts the Magi, in traditional costumes, presenting wrapped Christmas gifts to Mary and Joseph, both in 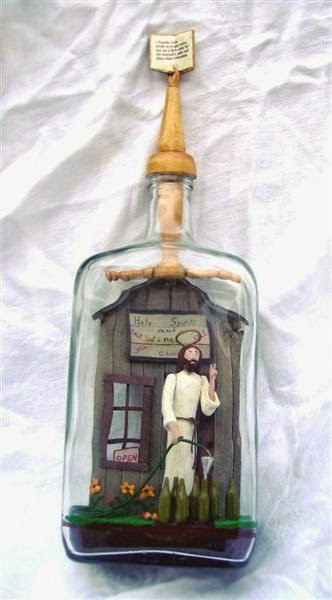 modern dress.  Another depiction of Jesus is not so easily fathomed, however, and  again I will give the artist himself the explanation: Jesus is outside his liquor store called Holy Spirits and Wine. He is busy filling seven green wine bottles with a garden hose, turning water into wine, keeping his costs down. The sign above him states that the store is closed on Sunday and that a sale occurring. There is an OPEN sign in the window and below three yellow Daisies are in the flower bed next to the hose spigot. He is giving a peace sign with his left hand while standing on a Coral snake. He is dressed in a white cloak with a brown belt rope, sandals and a golden halo. The stopper is hand and book inspired. It is made of Bass wood and has a locking mechanism. On the pages of the book is a bible verse; 1 Timothy 5:23. "Drink no longer water. but use a little wine for thy stomach's sake and thine often infirmities."

While upon a quick glance one might see this bottle making fun of the miracle at Cana where Scripture says Jesus changed water into wine for a wedding feast,  I see Moseley striking at those “prohibitionary” Christians who try to ban all alcoholic beverages as sinful.  The diorama emphasizes that that wine was very much a part of the life of Jesus. Note too that Jesus has his foot squarely on the snake that tempted Adam and Eve.  To me Moseley is saying that while an apple may have led to sin, alcohol does not. Finally, the quotation from “Timothy” has St. Paul counseling early Christians to make spirituous drink a part of their daily fare.  That too is a stick in the eye of the Temperance crowd.

At this point I should note that each of the folk pieces above are crafted within whiskey bottles.  Moseley is careful to note the provenance of each.  The Yarmouth piece is from a Captain Morgan Rum bottle.   More popular with Steve as a container, and possibly as a beverage as well, is Knob Creek Bourbon.   Empty Knob Creeks surround the other three whimseys shown above.

One of the most complicated pieces of Moseley’s creation is his rendering of The Last Supper, which in his hands becomes “The Last McSupper.”  Note the McDonald’s containers on the table.  The assembly is drinking from plastic cups and eating hamburgers and fries.   Again, I do not find this offensive.  The Last Supper image has appeared on velvet,  tee shirts,  coffee cups and dozens of other secular items.  Moseley is asking us to think about a clear juxtaposition of the sacred and the profane. 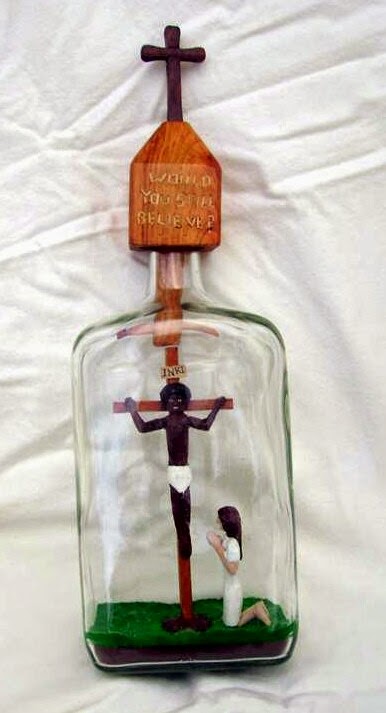 He is also sending a message by the Crucifixion scene:  Would white Christians believe in a black Savior?   Moseley describes it this way:  This Crucifixion bottle is a so called variation on a theme. Here, Christ is black unlike the run of the mill Christ's which are white. My neighbor described him as "African American". I don't know how he determined the nation of origin by looking at him, but he is more perceptive than I am. There is a INRI sign above Christ's head which stands for Jesus of Nazareth, King of the Jews. There is a woman follower praying at the base of the cross. The stopper is made of Curly Cherry and has a Walnut cross at the top. Inlaid with Basswood is the title of the whimsey: Would You Still Believe?

The last two bottles shown here also carry out a Jesus theme.  For the first, the challenge is for Evangelical Christians to contemplate which candidate for President the Lord would be supporting in the 2012 election,  Romney or Obama.   Moseley clearly thinks Jesus was on the side of the President.   In the second he also fantasizes about what Jesus would do about pederast priests.   We see a man in a Roman collar offering a lollipop to a young boy.

Neither see that the Lord has a rifle leveled at the priest.  The closure has an abbreviation that means, What Would Jesus Do?”   Point made.

For my money,  Steve Moseley is making the best use of “dead soldier” whiskey bottles that can be found anywhere.  With his craftsmanship,  his imagination and, perhaps most of all, his sense of irony he is creating objects of considerable interest.  My hunch is that decades hence his works will be shown as an exemplar of American folk art in our time.