A Coventry Flask: History in My First Glass Bottle 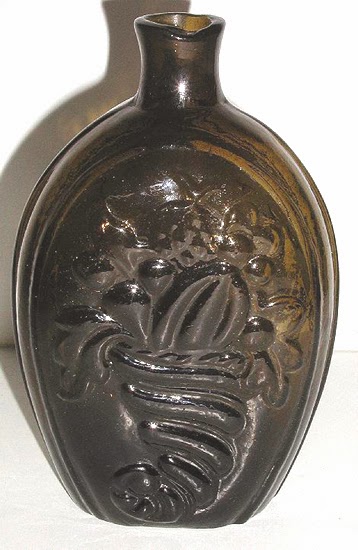 Although for the past thirty or so years I have written for such magazines as the  “Antique Bottle and Glass Collector” and “Bottles and Extras,” including dozens of articles on a wide range of glass containers,  I have not collected them.  Ceramic jugs, yes; glass paperweight, yes; glass bottles, no.  Recently, however, I was awarded an early 19th Century dark olive flask as a writing prize and now I am displaying it proudly as my first glass bottle.

It also offered an opportunity to do some interesting research on a glassworks that gets scant notice in the literature.  Shown here, the flask is from the Coventry Glassworks from the Connecticut town of the same name.  Coventry’s claim to historical fame is that it was the birthplace, shown here, of Nathan Hale.   He regretted that he had only one life to give for his country. 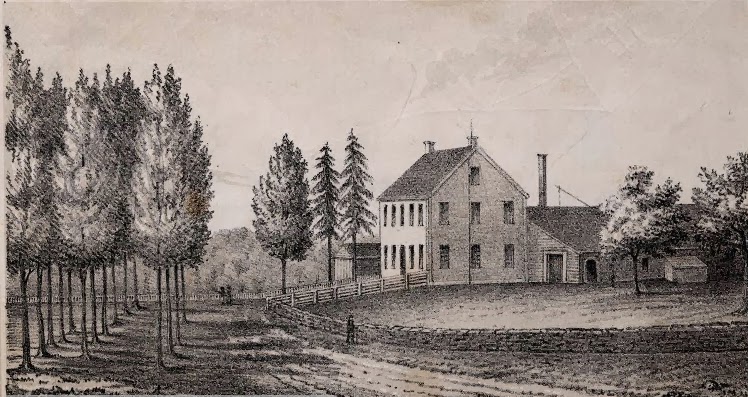 The glassworks was founded about 1813 by a group of businessmen from Coventry and East Hartford, Connecticut.  By 1820 an accomplished glassmaker named Thomas Stebbins was operating the works.   Later he was joined in the enterprise by Rufus Chamberlain.  Other ownership changes

followed with Chamberlain being part of them all.  In its final years the company was known as Chamberlain & Turner.  Apparently a scarcity of wood to fuel the furnaces hampered the output of glass and Coventry Glassworks closed its doors for good about 1849.

Despite its many changes of ownership,  Coventry has been described as a “powerhouse.”  During its 36 years of existence the glassworks, according to experts, produced all types of glass, among them snuff bottles, as one shown here. The factory also  turned out porters, wines, inkwells, blacking bottles, octagon vials, jars of all sizes, demijohns, chestnuts, sunburst flasks, and containers for medicinals.  An array of Coventry glass, much of it in shades of olive green and amber, is shown here. 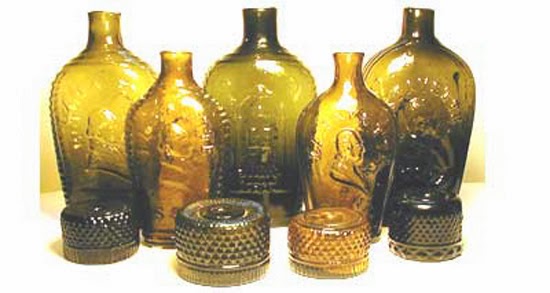 All pieces were “blown in a mold,” a process demonstrated by an illustration. 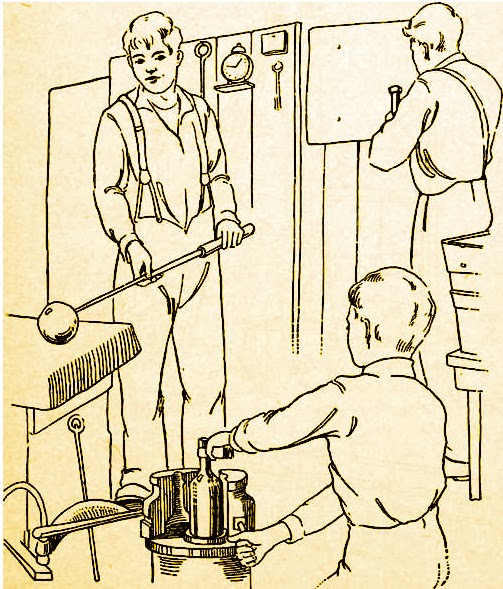 A primary product of the Coventry glassworks were historical flasks.  Those bottles, which like held some form of liquor, were highly popular in the early days of the Republic and often commemorated national heroes like George Washington, Thomas Jefferson, Benjamin Franklin 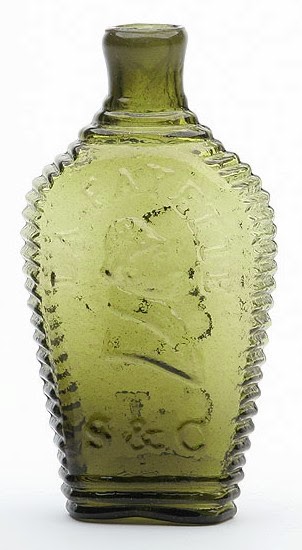 and, yes, Nathan Hale.  The first American historical flasks are attributed to Coventry.  They were the Lafayette flask, shown here, to commemorate the visit of the French hero of the American Revolution and a DeWitt Clinton flask honoring the opening of the Erie Canal.

Other Coventry flasks struck similar patriotic themes as in a striking ruby red bottle that features a striking figure of an eagle with a banner overhead with a single word, “LIBERTY.”  Flasks also trumpeted

economic progress as in a Coventry flask honoring the railroad. Inexplicably it seems to feature a horse or horses in the design.   Even the flask awarded to me, classified by historians of early glass as a “GIII-4,  has a patriotic message.  Shown at the top of this post, it features a cornucopia, aka “horn of plenty.”  The other side, shown here, features an urn that is similarly filled to overflowing with fruit and other goodies.  The message of the bottle clearly is that America is a land of prosperity.  Thomas Hollis, a druggist and wine merchant of Boston thought so much of the design that he filled it with pale sherry and slapped his label on the flask. 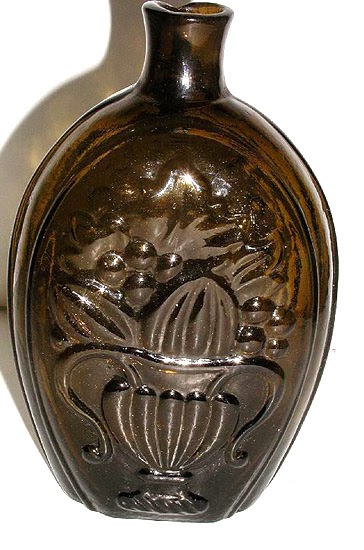 Although historical flasks usually fetch big money at bottle shows and auctions,  flasks such as the Coventry cornucopia can be acquired by a collector for a reasonable outlay.  They are not highly space consuming,  come in many beautiful shades,

and display well against the light.  Most of all they are to be cherished for their historical significance.  The flasks memorialize a time  when the Americans were beginning to understand their country's place and importance in world history.

As for my first piece of glass,  my Coventry flask (my GIII-4) will remain in a place of prominence in our home, not just to remind me of the award, but also of the importance of an early glassworks that did not just mold glass, but also helped shape the American consciousness.