Savoring the Saloons of Times Gone By 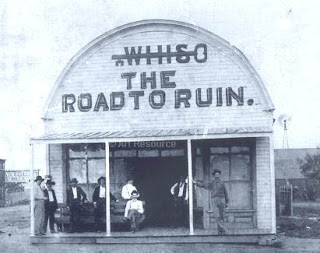 Just recently I have been reading a book called “Watering Holes of Yore: The Saloons that Made Texas Famous,”  by multiple authors.  Over the years for my own edification, I have collected a number of photographs of old time saloons.   Now it occurs to me to share them on this blog.   They include two saloons that I personally have visited and one, at the end, that is an all-time favorite.

The first establishment shown here is a Texas saloon, but not one covered in the book I have referenced.  My fascination is with the imaginative way that the proprietors have rendered the word “whiskey.”  Obviously with tongue firmly in cheek,  they have proclaimed it “The Road to Ruin.”  Yet the front door is open wide and the gents on the porch obviously have left the bar to have their pictures taken.   This photo 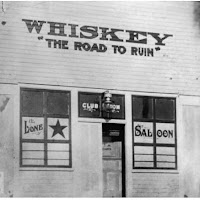 identified the state but not the town.  It reputedly was taken in the 1880s.

The next photo replicates the theme.  From the designation as the “Lone Star Saloon” and the symbol provided, it might be assumed that it was located in Texas,  the Lone Star State.   Wrong.  This establishment was located in Corona, New Mexico.   The date given for it was 1919.  By that time Texas was fully into the Temperance Movement and increasingly legal restrictions were being put on saloons and drinking.  By contrast New Mexico was still wide open.

The next image is from South Dakota and although it has no sign,  the passengers on the stage coach stopping there would know that strong drink was to be had inside.  This photo is from an earlier 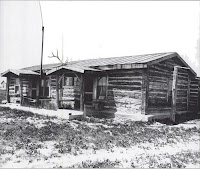 article I wrote on a Western character known as “Devil Dan” Roberts.   As cowboy, he rode up to a stage stop saloon very much like this one in 1886.  Roberts was employed by the VVV Ranch on the Belle Fourche River and was heading for Deadwood for the Christmas holidays when he dropped into the saloon to warm up from the frigid Dakota weather.

A holiday dance was in progress and the saloon owner, who had been nipping at his own booze all day,  was heading to bed to sleep it off.   He asked Devil Dan, who did not drink,  to look after the business. The well-likkered cowboy crowd got rowdy and began to break up the furniture and knock out windows.  Dan let them have their way but as the men sobered up he made them pay for the damages.  The next morning the owner sold the place to Roberts for $125 and departed.  Dan repaired the damage and appears to have taken to the role as saloonkeeper.  After running the  establishment 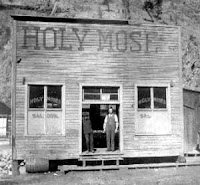 for a few months, he apparently sold it and leased the Cliff House, a larger stage coach station and saloon, in nearby Deadwood.

The next picture is from Creede, Colorado.  Two men standing in the open doorway of the “Holy Moses Saloon,”  which is next to the narrow, rocky canyon walls that surround the town,  located in Mineral County.   Note that the building is rather ramshackle with a broken cornice and a barrel lying out front.  A note on the photo says that the man standing in the white shirt and vests was the owner and the sheriff of Creede whose name was William Orthen.   His saloon was the first liquor den in town.

A much better known lawman cum saloon keeper was Judge Roy Bean, who billed himself as the “Law West of the Pecos.”  For about 16 years, Bean lived a prosperous and relatively legitimate life as a San Antonio businessman. In 1882, he moved to southwest Texas, where he built his famous saloon, the Jersey Lilly, and founded the hamlet of Langtry. Saloon and town alike were named for the famous English actress, Lillie Langtry. Bean had never met Langtry, but he had developed an abiding affection for her after seeing a drawing of her in an illustrated magazine. For the rest of his life, he avidly followed Langtry's career in theater magazines. 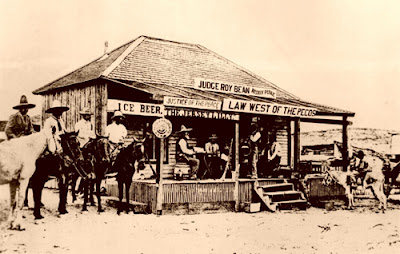 Before founding Langtry, Bean had also secured an appointment as a justice of the peace and notary public. He knew little about the law or proper court procedures, but residents appreciated and largely accepted his common sense verdicts in the sparsely populated country of West Texas.  By the 1890s, reports of Bean's curmudgeonly rulings, including an occasional hanging,  had made him nationally and internationally famous.  Before his death, even Lillie Langtry had dropped by. 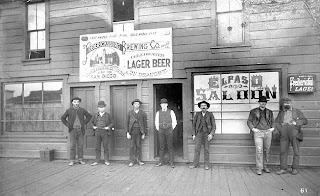 The following photo of the gents standing in front the El Paso Saloon has intrigued me for the wide variety of headgear they sport, as well as the varied positions of their hands.  Several look as if they might be preparing to draw and shoot.  Despite the name it is not possible from the picture to identify the town.  El Paso Hotels with saloons were located not only in El Paso but also in Fort Worth and San Antonio.   I assess the date as about 1910 or after. The advertising sign over the door for Fredericksburg Beer on tap has a definite  20th Century look. 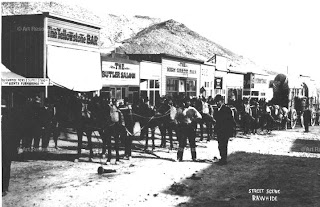 The photo following caught my eye for the 20 mule team in the foreground and the row of saloons in back. Thirsty customers had a choice of the “The Yellowstone Bar,”  “The Butler Saloon,” or the “High Grade Bar” and so on down the line of watering holes in the town of Rawhide, Nevada,  at the 1908 height of the Gold Rush. In the short span of two years the town went from its peak population of 7,000 people (March to June, 1908), to fewer than 500 by the latter part of 1910. Helping push the decline of the Rawhide even further along was a fire that swept through town in September 1908, along with a flood the following September, from which many residents did not recover or rebuild.

When the original mines worked out the remaining gold and silver from the veins, more people left Rawhide. There remained only a few  who eked out a livelihood working in the mines, or processing the ore, or just working their own claims and prospecting.  Most of the saloons had closed and the town became a hollow shell of what it once was.  By 1941 only a few hardy souls were left in Rawhide, and the post office was closed.  Today it is a “ghost town” with only photos to remember its heyday. 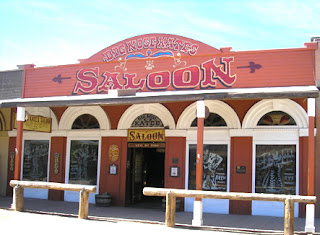 The only watering hole in color and one I have actually visited is “Big Nose Kate’s Saloon.”  This place got its start as the Grand Hotel in Tombstone, Arizona, as the Grand Hotel.  Opening in September, 1880, it was consider one of the state’s premier hotel, boasting thick carpeting and costly oil paintings.  The lobby was equipped with three elegant chandeliers and more luxurious furnishings, while the kitchen featured both hot and cold running water and facilities to serve as many as 500 people efficiently.

It is said that Ike Clanton and the two McIaury brothers stayed at the Grand the night before the famous gunfight at the O. K. Corral.  Now the place is named for the erstwhile girl friend of another participant in the famous showdown, Doc Holliday.  I was in Tombstone a few years ago and stopped into Big Nose Kate's to look around and have a beer. Sadly, it appears no different than the other touristy bars and restaurants along the main drag, but the history is still there.

The final photo is not in the Far West but from Milwaukee, Wisconsin.  But, you say, it looks more like a church than a saloon.  Yes it does.  The building was constructed as a Methodist house of worship in the late 1800s only to find itself smack dab next to Milwaukee’s ever-expanding Pabst brewery.  The perfumes of beer production wafted over the structure frequently.  After Prohibition the church was sold to the brewery which made the first floor into a restaurant and bar and used the upstairs for a training center.  They called it the “Forstkeller” and supplied it with fresh beer daily.  It was my favorite watering hole for years and even after leaving Milwaukee in 1961, I always walked in the door at least once on every visit to town.  Unfortunately, both the Forstkeller and Pabst have been shut for many years.

There they are,  nine of my favorite saloon scenes.  Just looking at them makes me thirsty.  Think I will head out for a tall cold one.

Posted by Jack Sullivan at 1:46 PM