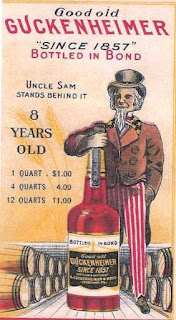 My post of October 2011 featured examples of American whiskey distillers and dealers using the 1897 “Bottled-in-Bond” Act as an excuse to claim that the U.S. Government was behind the quality of their liquor.  Frequently they resorted to images of Uncle Sam pitching their product to get the message across.  In subsequent months I have been able to collect additional images of the gallant old gentleman selling whiskey.

The Act required that the whiskey was (and still is) produced according to a set of Federal guidelines. The distiller sealed the results in bonded warehouses and marketed the aged product under proprietary names that came with a guarantee of integrity from the United States Government.  The federal OK is symbolized by sealing the whiskey with a green strip stamp on each bottle. In exchange for meeting all these requirements, distillers do not pay taxes on their whiskey until it is bottled and removed from the warehouse for sale.  Treasury agents are assigned to distillery warehouses to insure the rules.  When the law was new, canny whiskey men saw great advantage in using Uncle Sam in their advertising.

Among them was Asher Guckenheimer.  He founded his Pittsburgh distillery in 1857.  His liquor became a leading national brand after winning top prize at the 1893 Colombian Exposition in Chicago.  Following his death family members carried on the business for several years. 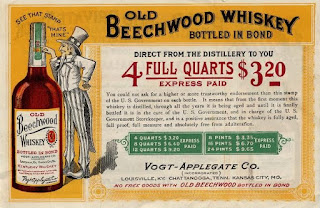 Guckenheimer, possibly more than any of his competitors, used Uncle Sam in a wide variety of ads, many in black and white for newspaper use.  Here, however, he is represented by a color ad that depicts him “standing behind” a large bottle of “Good Old Guckenheimer.”

Old Beechwood was a brand from the Vogt-Applegate Co. of Louisville.
Col. C. L. Applegate first forges onto the scene in 1876 when he and a brother, Edward, purchased land in the small town of Yelvington, Daviess County, Kentucky.  The brothers planned a new facility for rectifying, bottling and wholesaling whiskey.   With financing from Henry Vogt of the Vogt Machine Company in Louisville, the Vogt-Applegate Co. was founded and began operation.

The Colonel was a vice president and the company pitchman.  The Louisville offices were located at 236 Fourth Street but eventually moved onto Whiskey Row at 102-104 E. Main Street.   As 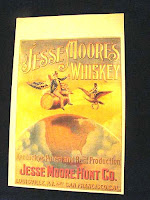 Vogt-Applegate met with success, the company opened branches in Kansas City and Chattanooga.  “Old Beechwood” was the company’s  flagship label, advertised widely both regionally and nationally.  In this ad, Uncle Sam is pointing out the green stamp that identifies the whiskey as bottled in bond.

Applegate’s fellow Louisville whiskey man,  Jesse Moore, appropriated Uncle Sam for a poster advertising a whiskey that bore Jesse’s name.  He shows the old gentleman flying over the earth on a whiskey barrel, trailed by an American flag.  The ad claimed that Jesse Moore’s whiskey was the purest and best production.

This company was founded immediately after the Civil War in 1866 by Moore and continued by his son, George H. Moore.  The latter formed a partnership with a Pennsylvania man,  Henry Browne

The American flag frequently figures prominently in these ads.  For example, Samuel Worman began a wholesale liquor business in Philadelphia with a partner named Fluck about 1872.  Two years later Fluck was gone and 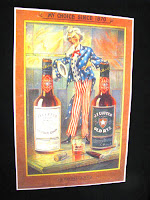 Worman’s name alone was on the company letterhead.  The firm was located sequentially at two addresses on the city’s North Second Street. “Golden Drop” was the firm’s flagship brand. The Worman Co. disappeared from Philadelphia business directories after 1912.

Part of a prominent West Coast whiskey family,  John F. Cutter founded a whiskey company in San Francisco about 1870, as claimed in the ad.  He later sold the brand to Edward M. Martin, an Irish immigrant.  After Cutter’s death in 1880, the company appears to have continued to market J.

F. Cutter Rye as well as other brands.   This ad shows a tiny Uncle Sam, apparently standing on a table, recommending Cutter products.  A glass and a burning cigar suggest a second party is in the room.

One whiskey outfit not only appropriated him as its pitchman, but actually named its products as “Uncle Sam Brand Whiskey and Brandy.”  The image here is a letterhead showing Sam sitting with a 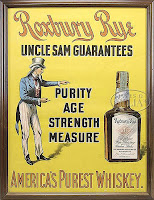 jug of whiskey from the U.S. Distilling Company of Crouse, North Carolina.  My research has yield minimal information about this company.

In 1893  George Gambrill of Baltimore registered Roxbury Rye as a brand with the government, with a distillery in Roxbury, Maryland,  a village in Washington County  about twenty-three miles from Baltimore.  Despite being located in Maryland, he incorporated the company in West Virginia, probably to avoid taxes.  An energetic salesman, Gambrill built Roxbury Rye into a nationally recognized brand in relatively few years.

Gambrill, however, had problems keeping on the right  side of the law.  Speculating on wheat futures, he sustained financial losses that authorities thought added up to out and out fraud.  As a result Gambrill was hauled into court in 1910, accused of putting up the same whiskey as collateral for separate, forfeited loans totaling a half million dollars. 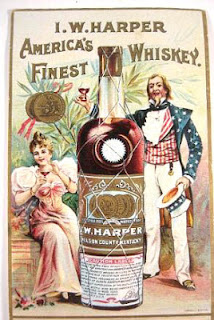 He was tried, found guilty, and sentenced to four years in prison.  His Roxbury distillery was shut down and George exited the liquor business but wiggled out of serving any time in prison.  View in context his reference to Uncle Sam seems particularly brazened.

I.W. Harper, a brand that is still available on shelves today, was from the Bernheim brothers, Bernard and Isaac.  They arrived in the United States from Germany with pennies in their pockets and found a friendly welcome with the Uri whiskey family of Paducah, Kentucky.  Finding Paducah too constraining, the pair decamped to Louisville in 1888 and ultimately became the most successful and prosperous distillers in Kentucky.  The Bernheim’s Uncle Sam is clearly in a party mood, holding aloft a cocktail glass full of booze while a comely lady friend joins in the toast.

This coupling of the old gentleman with a female ushers in two ads that make use of national symbols, in effect doubling the dose of patriotism being implied.  One lady is the Spirit of Freedom, known by her floppy hat and flowing gown.  Her statue stands atop the dome of the U.S. Capital building.  Here she is assisting Sam hold up a banner for two Fleischmann brands against a back drop of American flags. The Fleischmann Company, headquartered in Cincinnati, was an offshoot of the famous yeast manufacturers.  Another name that survived Prohibition, Fleischmann today is known chiefly for its gin. 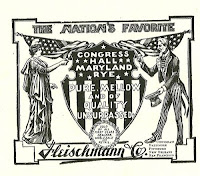 Even a Scotch whisky saw the benefit of employing a debonair

Uncle Sam in its advertising, even coupling him with another famous American symbol, Lady Liberty.   Both are saluting a foreign-made whiskey,  Haig & Haig.  The Scottish Haig distilling family in 1888 strongly targeted markets in the United States and ads like this were the result until the advent of Prohibition in 1920.  Unlike the other images shown above,  this ad was not generated by the bottled in bond legislation which did not apply to imported whiskey. 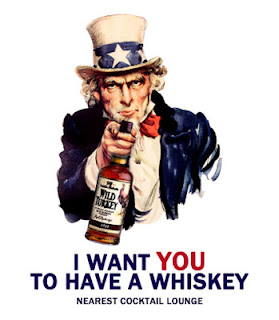 Our last Uncle Sam is of contemporary origins.  It is an imaginative takeoff of the famous World Two poster which showed the same pointing figure and bore the motto “Uncle Sam Wants You.”  The original was meant to spur enlistment's during the Second World War. This sign, by contrast, urges us to head for a cocktail lounge.   Wild Turkey is a premium brand of bourbon made in Lawrenceburg, Kentucky.