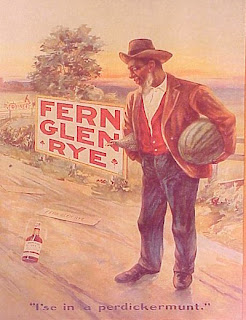 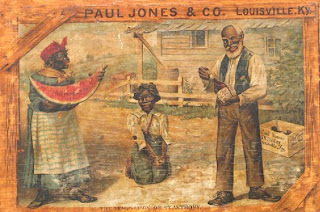 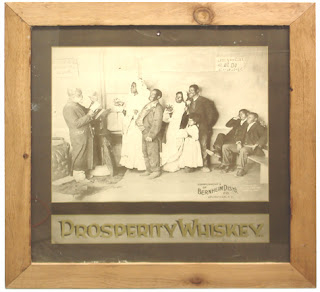 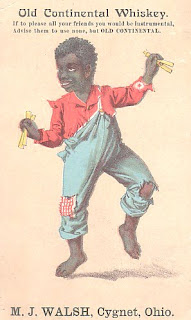 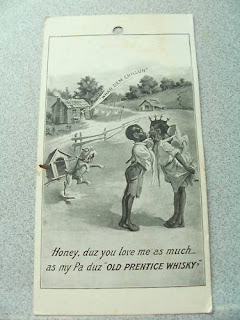 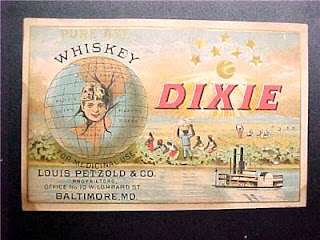 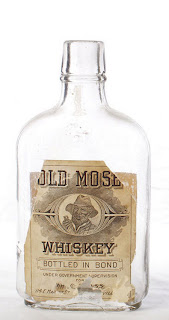 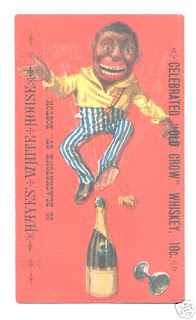 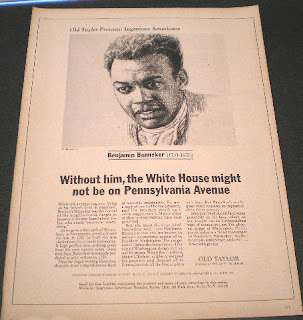 For the past two years, my contribution to February’s Black History Month has been to discuss the historical depiction of blacks in whiskey advertising. The 2010 post focussed on a series of images to show some progression over the years as views on civil rights evolved. Last year the post featured ads depicting black waiters serving whiskey. This year I have gathered another group of images from the late 19th and early 20th centuries, several of them disturbing but nevertheless instructive.

The first is a sign that shows a black man walking down a road with a chicken under one arm and a watermelon under the other. We are expected to assume that he did not come by either honestly. He has spotted lying in the road, a bottle of Fern Glen Rye whiskey and looks at it with great interest. But he will have to lay down one or the other treasures in order to secure it. “I’se in a perdickermunt,” he says. The whiskey made by the Fern Glenn Distilling Co. of St. Louis, Missouri. The company appeared only a short time, 1916 and 1917, in local business directories, perhaps indicating ads like this did not work.

The stereotype watermelon appeared in another distiller’s ad, again involving a choice between the melon and a bottle of whiskey. The melon is held by a black woman wearing an apron; the whiskey by a bearded winking man. On the ground in front of them is a boy wearing a tattered hat who is clearly torn between one and the other. The caption is a strange one: “The Temptation of St. Anthony.” The medieval saint’s temptations were largely sexual in nature, rendering this caption ridiculous.

This image appeared on a number of signs, some like this one with a faux wood motif. It was the product of the Paul Jones Distillery. It was founded by a family who provided sons and their wealth to the Confederacy only to find after the war that their home was in ruins and they themselves were destitute. This may have been the reason for the persistent racism in Paul Jones advertising. Initially from Virginia the Jones family moved to Frankfort, Kentucky, in 1886 and eventually adopted the name, Frankfort Distillery. It was one of a favored few distilleries allowed to make medicinal whiskey during Prohibition and emerged into the Post-Pro era, where its advertising continued to demean blacks.

The next ad, for Prosperity Whiskey, was the product of the Bernheim Distillery of Louisville, Kentucky, an organization better known for its I.W. Harper Brand. The Bernheims, emigrated from Germany with little money but created one of the most successful whiskey enterprises in American history. The photographic image of a Negro wedding shown on this saloon sign is profoundly offensive even by the standards of that earlier time. Although accounted philanthropists, the Bernheims apparently were not above patently racist advertising. The next ad, showing a ragged black boy dancing to his own accompaniment is also from Bernheim. It advertises “Old Continental” whiskey. Cards like this were printed with a local saloon carrying the whiskey printed on the bottom.

The next card shows a black boy kissing a black girl with the caption: “Honey duz you love me as much as my Pa duz ‘Old Prentice Whisky?’” In the background a voice from a cabin says, “Whar dem chillun.” This brand was the product of J.T.S. Brown & Sons of Louisville
in business from 1871 to 1919. These were blenders of whiskey featuring several brands and drawing their liquor from a range of Kentucky distillery warehouses.

The Louis Petzold Company of Baltimore produced a trade card with a murky message. It shows a white youth poking his head from a globe of the Western Hemisphere while in the background a group of blacks is picking a vast field of cotton. In the foreground a side-wheeler steamship moves by. The whiskey is “Dixie” and it product said to be “for medicinal use.” Petzold, a German immigrant, is said to have started a liquor business in 1862, although his initial directory listing is 1870. The firm disappeared from listings in 1898.

Unfortunately the torn label on this “Old Mose” flask prevents identifying the merchant behind the brand. The organization also issued a shot glass advertising Old Mose but did not include other information. The next trade card shows another dancing black. This time it advertises both a whiskey (Old Crow) and a saloon (Hayes at the White House). This was a Boston-based drinking establishment that sold customers a beer for a nickel and a shot of whiskey for a dime.

The sum impression of these pre-Prohibition images is their perpetuation of racial stereotypes, their distortion of black physical features, their attribution of fractured English, and their feeble attempts at humor. As a antidote to these images, I include here a 1966 Old Taylor Bourbon ad that celebrates as an American hero, Benjamin Banneker (1731-12806), a free African American astronomer, mathematician, surveyor, almanac author and farmer. The ad celebrates in particular his role in surveying the boundaries of the District of Columbia.
Posted by Jack Sullivan at 7:41 AM