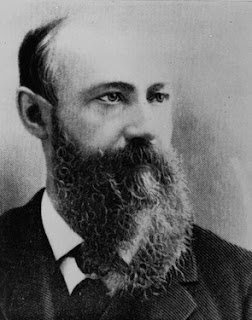 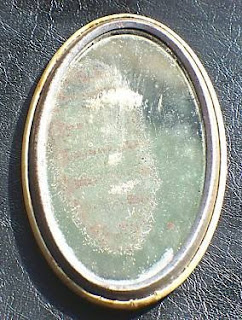 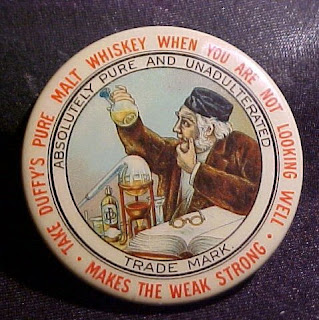 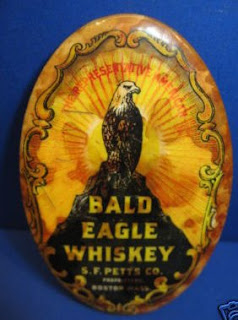 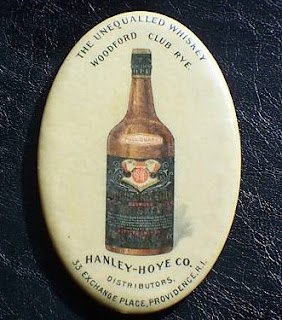 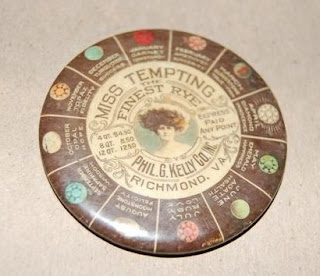 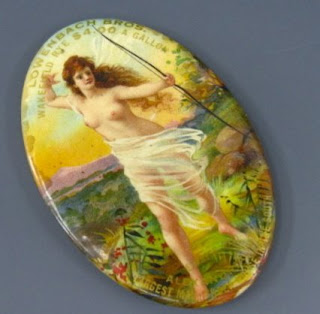 If it had not been for the invention of celluloid, one of America’s most popular advertising giveaway items might never have existed. A New York inventor named John Wesley Hyatt, shown here, stumbled on the substance during the 1860s while trying to find a substitute for elephant ivory in billiard balls. In the process he developed the world’s first industrial plastic.

Put into mass production in 1872, celluloid rapidly became popular for its ability to be shaped and to carry elaborate colored lithographic images. In particular it was suited as backing small mirrors that could be stowed away in a pocket. The mirrors came both round and oval, with typical size for the latter at 2 3/4 by 1 3/4 inches. An ad was on the back, a reflective surface on the front.

Millions of pocket mirrors have been distributed down through the years advertising everything from baby shoes to funeral parlors. In keeping with a theme of this blog, I have been interested in them as vintage giveaways by whiskey makers and sellers.

Even in this narrow universe, designs vary widely, although most reflect the merchandising themes of the brand of liquor they advertise. For example, Duffy’s Malt Whiskey, which claimed to be America’s only medicinal whiskey and able to make “the weak strong,” regularly featured the aged alchemist who presumably first cooked up the potion. Petts’ Bald Eagle Whiskey patriotically featured the white headed national bird on its mirror back, calling it “The Representative American.” The owner was Sanford Petts who ran a liquor business in Boston, Mass., with his son until Prohibition.

Woodford Club Rye, self-described as “the unequaled whiskey,” showed less imagination by featuring its labeled quart bottle. This booze originated with the Hanley-Hoye Co. Cofounder James Hanley was an Irish immigrant who became a towering figure in the in beer and liquor industry of Providence, Rhode Island, during the late 1800s and early 1900s.

Pictures of women, sometimes clothed, sometimes not, often were featured on pocket mirrors. Phil G. Kelly of Richmond, Virginia, called one of his many rye whiskey brands “Miss Tempting.” The picture on his giveaway pocket mirror shows a middle aged woman with a mop of hair and a large hat whose allure escapes me. Lowenbach Bros., liquor dealers of Alexandria, Virginia, did not make the same mistake. Their illustration for Wakefield Rye is a full-bodied beauty fashioned after Diana, the Greek goddess of the hunt. Note the bow and arrow after dwelling on other features.

Each of these pocket mirrors is a highly collectible item -- and all made possible by John Wesley Hyatt and his serendipitous discovery of celluloid. By the way, celluloid did not prove practical for billiard balls.
Posted by Jack Sullivan at 5:55 AM