Whiskey in a Full Metal Jacket 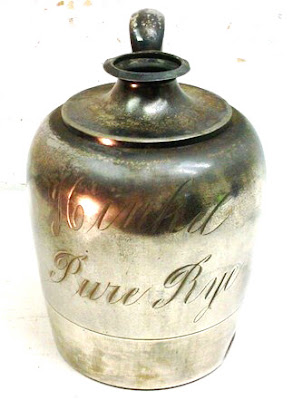 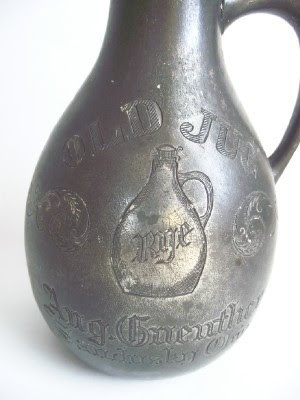 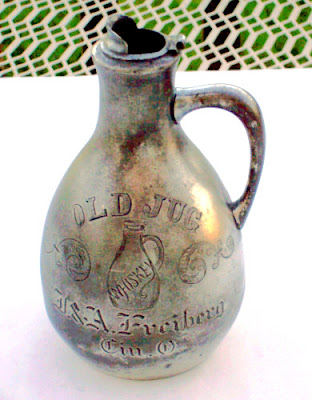 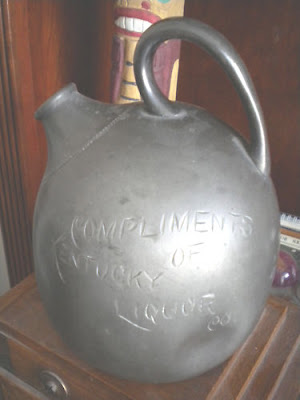 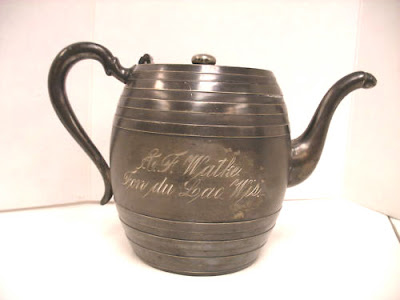 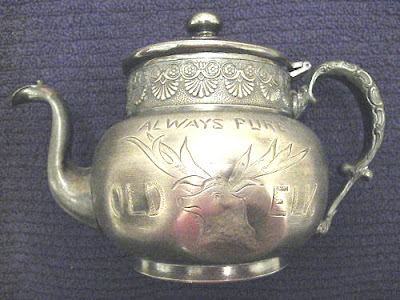 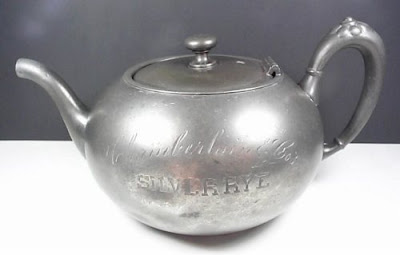 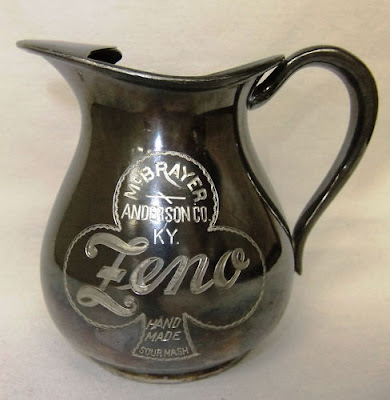 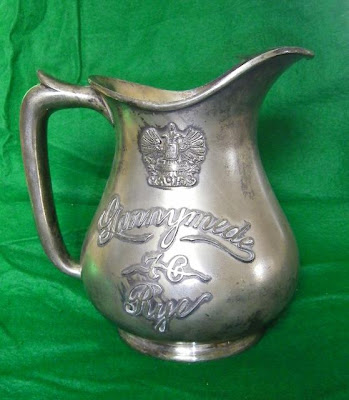 In December 2010, this blog featured eight metal teapots issued by whiskey distillers and distributors to advertise particular brands. Subsequently additional metal containers issued by the whiskey trade have come to light. In addition to teapots they include metal jugs and metal pitchers. Nine are displayed here, along with information about their origins.

Hinkel himself was a native son of Cleveland, born in 1867, who left school at the age of twelve to work as an office boy at Edwards, Townsend & Co, eventually rising to the position of manager of the liquor department. In 1892 he struck out on his own, establishing a wholesale liquor business. Eventually it became one of Cleveland’s largest.

The second jug comes from Sandusky, Ohio, bearing the name of August Guenthur. Guenthur was a self-described wholesale dealer in “fine whisky etc.” The metal container advertises Old Jug Rye, which was a proprietary brand produced by J. & A. Freiberg of Cincinnati. Brothers Joseph and Abraham Freiberg traced the origins of their firm back to 1866. Among a blizzard of liquor brands, their “Old Jug” was the flagship. They issued their own metal jug for Old Jug Whiskey, shown here, but in other instances allowed their dealers to add their own names, as August Guenthur did.

The fourth jug hails from the Kentucky Liquor Company. Despite its name, it appears that this vessel was the product of a liquor company in Chicago. Very little appears about it in the public record, but the firm shows up in city directories, located at 295 Wells Street, from 1892 to 2896.

Three additional whiskey teapots are shown here. The first is from “Old Elk.” the flagship brand of Stoll & Co. of Lexington KY. The Stoll family, operating under this name, established the Commonwealth Distillery in 1880. There followed a number of ownership changes in which family members took varying roles, including a time when the company became part of the notorious “Whiskey Trust.” In 1902 James Stoll reformed the company and acquired control of several Kentucky distilleries, making it the largest distilling concern in the state. When James Stoll died in 1908, family once more turned over their interests to the Trust.

M. H. Chamberlain & C0. of Detroit saw a real opportunity in issuing a silver plated teapot. Their flagship brand was “Chamberlain’s Silver Rye” and the metal container was appropriate advertising. This firm was founded in 1879 and existed into the early 1900s. Warehouse records show that the company was obtaining whiskey over the period 1901-1904 from the Burks Spring Distillery in Kentucky. Michigan was the first Midwest state to vote Prohibition in and led to the demise of M.H. Chamberlain & Co.

The third teapot is from a firm that had outlets in Fond du Lac and Milwaukee, Wisconsin. “Tom Benton” was its flagship brand with others being “Crystal Brook” and “Rosehill.” The originating firm may have been Rahte, Haas & Watke (1891), with the partners eventually going their separate ways, at least two of them, including Albert Watke whose name is on this teapot, claiming the Tom Benton brand.

Two metal pitchers issued by whiskey outfits conclude this post. The first advertises the Zeno brand from one of the feuding McBrayer family. One of the clan's distillery was founded in the late 19th Century by Judge W. H. McBrayer. After his death in 1887, the Judge’s estate went to his grandchildren and their father, D. L. Moore, ran the distillery. This jug, however, may have come from another distillery using the McBrayer name, something that fueled intra-family lawsuits.

The final item is a highly decorated silver plated pitcher bearing an embossed crest and the name Gannymede “76” Rye. It is from Cincinnati, an advertising item issued by Sigmund and Solomon Freiberg, brothers from the Ohio whiskey dealing family and related to J. & A. Freiberg. This company first showed up in city directories in 1899 and from the blizzard of brands it featured appears to have been successful for almost two decades. Gannymede “76” brand was its flagship.

These are just a few of the “full metal jackets” through which American distillers and liquor distributors merchandised their whiskey. A subsequent post will describe and depict others that have come to light.
Posted by Jack Sullivan at 6:22 AM 1 comment: 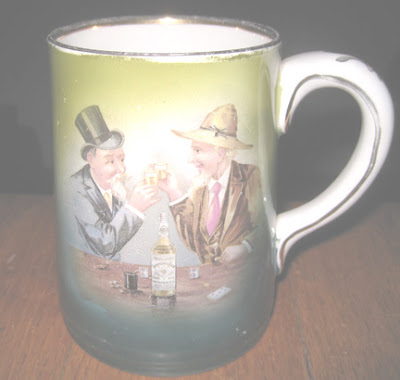 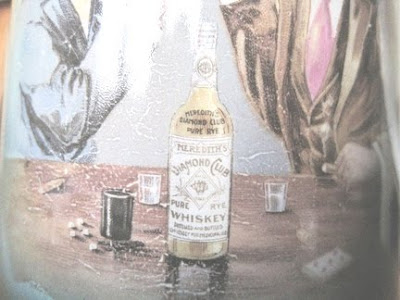 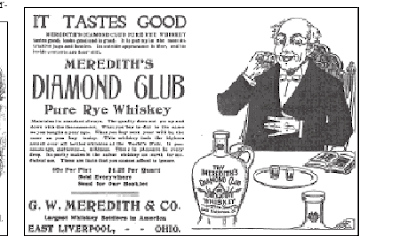 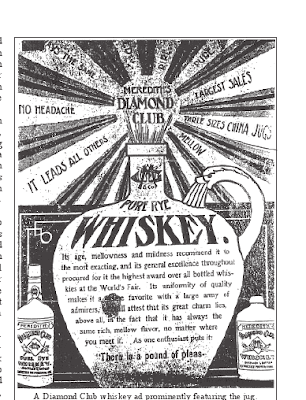 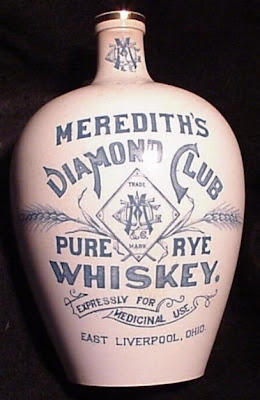 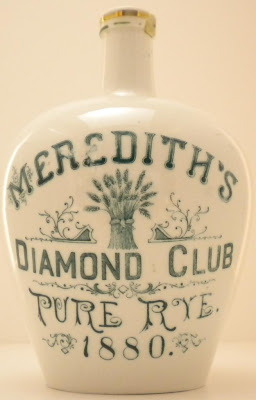 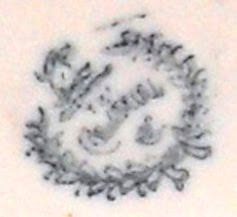 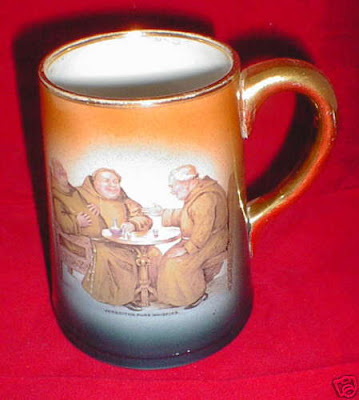 One of the more rewarding aspects of this blog, herein marking its 75th posting, is the response from readers who “stumble on it” while researching collectible items on the Internet and send me emails about them, often with pictures attached. One such reader was Greg Johnson of Minneapolis who sent me the picture of a transfer printed mug, shown here. It was one that I had never seen before. Its provenance was revealed from the bottle from which two men, a farmer and a banker, were drinking. This clearly was the handiwork of George W. Meredith.

George’s story begins in Utica, New York, where he was born in April 1850, the son of Thomas and Elizabeth Meredith. Not long after the family moved to Trenton, New Jersey In 1852, the father died. Mother soon followed him to the grave, leaving George a orphan from boyhood. The youth soon abandoned school to learn a trade as a potter and in 1877 moved to East Liverpool, Ohio.

During the late 19th and early 20th Century this town on the Ohio River was America’s largest producer of ceramic table and vanity wares. Known widely as “Crockery City,” in 1887 East Liverpool boasted 270 kilns and annually produced ceramic products valued at $25 million -- in a time when 25 cents would buy dinner. The largest pottery in town was KT&K -- Knowles, Taylor & Knowles, founded in 1854.

After a year working for a small pottery operation, Meredith in 1878 joined KT&K, working in one of the lowlier jobs -- as a jiggerman. This was the relatively unskilled the laborer who turned the potter’s wheel to shape the clay. But the occupation did not suit him and may even have injured his health. After a little more than two years he left the factory, ostensibly on his doctor’s recommendation.

Almost immediately this 30-year-old determined that a far better occupation was making and selling whiskey. The late 19th century was a time when saloons were opening in every city and town. They did not lack for customers. Lots of folks were going into the whiskey business, many as rectifiers -- operations that refined and blended liquors made by others. Meredith was a rectifier. He rented a storeroom in downtown East Liverpool and with one employee began buying grain neutral spirits in large quantities and blending his own brands, adding color and flavoring.

It soon became clear that despite his lack of book learning, Meredith had a real genius for marketing whiskey. Early on, for example, he called his principal brand “Meredith’s Diamond Club Rye.” Diamond Club was the name of East Liverpool’s most prestigious grouping of businessmen. It took lots of nerve for Meredith to associate his liquor with the club and his use of the name raised considerable ruckus around town. Before long, however, Diamond Club whiskey was a big seller, not only in East Liverpool, but in Ohio, and eventually across America. In time the businessmen’s club itself surrendered and changed its name to “Buckeye Club.”

Key to the popularity of his whiskey were Meredith’s advertising campaigns. His signs were painted on barn sides and rock outcroppings for miles around East Liverpool. He maintained a boat that was moored on the Ohio River and carried a mural advertising his products. One hot August day he even distributed hand fans to Temperance marchers that had an plug for his whiskey printed on the back.

Meredith’s knack for publicity was matched by the themes of his advertising. His newspaper ads and container labels insisted that the whiskey was “pure,” once again exhibiting his merchandising savvy. The hottest consumer issue of the decade was the safety of merchandised food and drink products. The Pure Food and Drug Act would be enacted a several years later and “purity” had the same draw as “all natural” does today. Diamond Club’s purity, Meredith announced, made it “the safest whiskey on earth” for medical purposes. He claimed that one “nip” was worth 10 doses of medicine and boasted that his liquor had been “officially recognized” by the medical profession. How and where, he did not elaborate.

By stressing his whiskey’s therapeutic rather than its lubricating qualities Meredith also was attempting to circumvent the burgeoning Temperance Movement. The business of selling “the safest whiskey on earth for medicinal use” expanded rapidly. Within a decade Meredith was one of North America’s largest whiskey distributors, serving a clientele, as he put it, “from Maine to California and Canada to the Gulf.”

This canny, self-promoting businessman also saw the customer appeal that bottling his whiskey in a whiteware china jug might have. He talked his former employers at KT&K into shaping a distinctive container, one with a graceful tapering body, a serpent handle, a fancy over-glaze label and plenty of gold trimming. On April 4, 1891, the East Liverpool DAILY CRISIS ran an ad stating: “The G.W. Meredith Co. is offering its Diamond Club Pure Rye Whiskey in china jugs that will come in three sizes.” The KT&K whiskey jug was launched -- every one of the bearing the message: “Expressly for Medicinal Purposes.” He also approved a striking design for an “1880” Meredith Rye.

As Meredith grew in wealth and prestige, he branched out in East Liverpool, organizing and becoming principal stockholder in the Crockery City Brewing & Ice Company. He also helped found and later became the president of The Colonial Company, a pottery with six kilns. Greg Johnson’s mug bears the Colonial mark, as does a Meredith stein bearing three monks, also shown here.

The town Meredith had adopted as his own ultimately disappointed him. In 1907 the Temperance marchers had their way when East Liverpool by local option voted itself dry.
He retaliated by eliminating the town name from his bottles and jugs and in 1908 moved his whiskey operations to Pittsburgh. After National Prohibition wiped out his liquor business there in 1920, Meredith migrated to Atlantic City, N.J., where he is said to have made another fortune in real estate. He also bottled a soft drink called “Whistle,” an orange-flavored beverage that had been invented in St. Louis just as Prohibition began. He died in Atlantic City in 1924 at the age of 74.

Meredith’s legacy is in the many advertising artifacts he left behind, ranging from a tiny watch fob in the shape of a jug to a giant ornate lamp stand. Greg Johnson’s recent find of the Diamond Club mug is a strong reminder of the genius of this pre-Prohibition whiskey man.

Posted by Jack Sullivan at 7:59 AM No comments: