Foreword:  Beginning in 2012, I was tasked at the Historical Division of the Alexandria VA Library with transcribing into a computer the hand-written diary of John Zimmerman, a local confederate soldier who kept a diary throughout the five years of the Civil War.  While it was anticipated that the diary would be put on the library website, that did not occur and sesquicentennial of the conflict has passed.  Believing that this fascinating document is worthy of more attention, I have prepared a summary in seven parts that will be posted here every four days  throughout April.

As McClellan withdrew his army toward Washington, D.C., early in 1862, the 17th Regiment was entrenching itself around Richmond.  Thereafter ensued one of the more bizarre adventures of Zimmerman’s military career.  He had become very sick, unable to report for duty, and was convinced he had malaria. From the symptoms he described, he probably was correct.  The Alexandria private sought out his commanding officer who told him to go to Richmond and remain there until he got well.  The boarding house in which he first lodged was expensive and he decided that he should go to the country for his health.  Borrowing civilian clothes, Zimmerman headed for Clarksville, Virginia, where his brother, Taney, lived.  After spending three weeks there convalescing, he determined to return to his regiment.  By this time the 17th had moved north with Lee’s Army toward fierce battles at Second Manassas and Antietam. Once again the 17th would take heavy casualties.

Zimmerman set out from Clarksville to find his unit.  At first by train and then completely on foot he traveled over the Virginia countryside, trudging through Culpeper and Warrenton before being told by an officer he should go to Winchester.  His told his diary that day:  Am sorry for this as it will give me a long march & am getting footsore as my shoes are nearly gone after the many miles on the road.  Am told it is about 50 miles to Winchester.  He did not hurry.  Along the route he stopped for several days to see friends in Paris, Virginia, and later lingered with an acquaintance at his Blue Ridge Mountain home.  Barefoot by the time he reached Winchester, Zimmerman was not allowed by military authorities there to cross the Potomac into Maryland and join Lee’s Army.  When the troops returned to Winchester, after seven weeks away Zimmerman was reunited with the 17th.  After the battle at Antietam, the bloodiest single day in the Civil War, he found only eleven men left from his original Alexandria Riflemen. 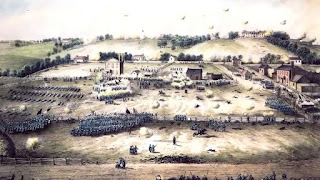 With his extended absence apparently not a problem for his military superiors,  Zimmerman rejoined his colleagues for long bivouacs around Winchester and Culpeper.  With news late in 1862 that Union General Burnside, who had replaced McClellan, was heading toward Fredericksburg with an army, the 17th Regiment and other troops were sent to reinforce the city.  Zimmerman described the battle [illustrated above] that ensued in great detail but he personally saw little action.  It was December and for weeks he had been seeking an overcoat.  Obtaining permission to visit the battlefield after Union forces had retreated, Zimmerman recorded that he had “never before seen bodies strewn so thick on any field.”  That did not deter him from stripping a dead Yankee of an overcoat or from this escapade:

Moving on toward the lower end of the town I saw Maj Fairfax of Longstreet's staff, preceded by the flag of truce & followed by two or three hundred prisoners.  A guard had been placed to prevent our men from passing to that end of town, but I wanted to go down to the river to see the prisoners sent over, so buttoned up the captured blue overcoat I had on to hide my uniform.  I watched my opportunity and slipped in among the prisoners and at the word “Forward March,” I stepped beside a Yank & marched off with them down to the river.  Soon after we arrived pontoon boats with white flags flying started to cross to our side of the river & an officer stepped ashore bearing a roll of paper & approached Maj Fairfax.  Maj F delivered him a roll bearing the names of the prisoners & they began to move toward the pontoons.  So I unbuttoned my blue overcoat & stepped out from among them.  The guard took in the situation at once & laughed at my trick to get to the river.

After Fredricksburg, Zimmerman’s brigade went into winter bivouac at Falling Creek, Virginia.  Always bored with life in camp, that he repeatedly described as “monotonous,” he was eager to attend the May 1863 funeral of Stonewall Jackson who had been fatally wounded at the Battle of Chancellorsville.   Going up to Richmond, apparently with permission, he reunited with the convalescing Charles McKnight.  Zimmerman described in detail the funeral procession and added this story: 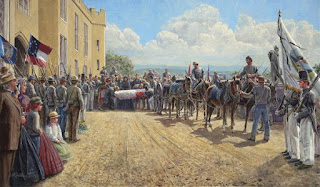 Just before the procession moved an old Veteran who had lost his right arm was seen making his way through the great throng and as the order had been given to clear the building, someone told the old soldier he was too late but he continued to struggle along toward the casket when one of the marshals attempted to turn him back.  At which the old man held up the stump of his arm and with tears flowing down his cheeks, exclaimed, “By this arm which I gave for my country I claim the right to see my General once more.”  Governor Letcher, who happened to be near, could not resist the very earnest appeal and so gave the order that the old soldier should be granted his wish and the lid of the casket was removed and the old man took a last look upon the face of his old Commander. [End of Part Two]

Posted by Jack Sullivan at 8:45 AM