Our German Ancestors Part 1: The Boers and the Webers

Previous “family stories” provided on this blog have involved ancestors whose origins were almost entirely in the British Isles --  English,  Welsh, Scotch and Irish.   They were high and low born, rich and poor,  Protestant and Catholic,  farmer and city dweller.  But they all shared one attribute --- all spoke English as a native tongue.   Moreover, most could read and write in English.   This was of immense benefit in America,  a prerequisite to “getting ahead.”

As the 19th Century progressed,  however,  other groups of immigrants were arriving who were not so privileged, people who did not come here speaking English.  They came from Central and Southern Europe.   Many originated in Germany and some of those German immigrants were our ancestors.  They are on both sides of our family.  In this post we tell the story of the ancestors of Paula, from her mother’s side.  In Part 2, to come, the story is of Jack’s German ancestors.

Although Germans had been emigrating to America for years, the 1860s were a period of strong movement from that country.   Compulsory military service had been initiated in Germany in 1859  and the Iron Chancellor,  Otto von Bismark,  had initiated an aggressive foreign policy that would eventuate in a series of wars.   For enlisted men, service in the German Army was akin to a prison sentence.    Common soldiers were brutalized and forced to survive in a de-humanized atmosphere,  even in periods between actual combat.  Many recruits died as a result of harsh treatment during basic training.

Paula's great grandfather, Bernhardt (sometimes”Bernard”) Boers was a “house” tailor,  apparently working for a wealthy family in Drensteinfurt,  Munster,  Westphalia, when he was drafted into the German Army in 1863 or 1864.   Within a short period,  Bernhardt was convinced that military life was not for him.   He went absent-without-leave and returned to Drensteinfurt.   There he married Anna Sumering,  who had worked as a maid in the same wealthy home.  Shortly thereafter,  probably one step ahead of the authorities,  they took off for America.

We know nothing about the origins or parentage of Bernhardt and Anna,  but among all our more recent ancestors,  this couple is the only one whose ocean passage we have been able to document.   “German Immigrants - List of Passengers Bound from Bremen to New York” records the passage of Bernhardt and Anna aboard the steamship,  America, from North German Lloyd in Bremerhaven, shown below.   It arrived in New York harbor on July 18, 1864.   His age is given as 27,  which is internally consistent with other records.  She was 24. 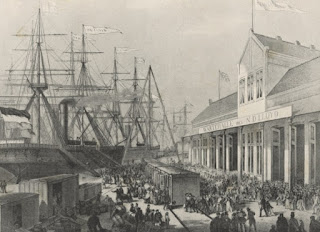 The Sidewalks of Peoria

We do not know why the couple settled in Peoria, Illinois.   Bernhardt,  according to the family,  had sister who preceded him to the U.S. and who ultimately went out West.   He also had a brother named Henry who was a Catholic  priest and emigrated later and settled in Wisconsin.   We have found a record of Henry serving briefly in 1870 as a pastor of a German Catholic parish in Kewaskum,  Wis.,  in Washington County. But Bernhardt and Anna did not move on to Wisconsin.  They made Peoria their permanent home and are buried there.

Since Peoria figures large in our German ancestor story,  a word about it is appropriate here.   This city in northern Illinois was the first European settlement in the state and one of the earliest in the Northwest Territory.  Located 130 miles southwest of Chicago,  Peoria lay at the southern end of a long lake and was an area rich in fish and game.  Using the Illinois River,  which flows to the Missouri River and thence to the Mississippi,  access to Gulf ports was possible.   The earliest European inhabitants were French settlers who eventually were made to move when American soldiers built a fort on the site in 1813.   As in Wisconsin,  fertile land could bought cheaply from the U.S. Government and widespread farming began about 1819 with Peoria as the market town.  It is shown below as it looked in 1867. 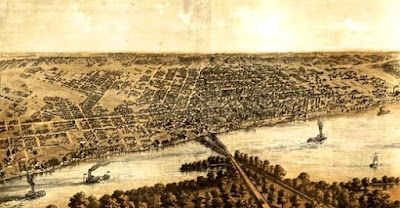 In 1854 the first of 15 railroad lines was established.   By the late 1800s 120 trains per day left Peoria,  bound for cities small and large,  including New York and Denver.  The city prospered and experienced both an economic and population boom.   Among early industries were meat packing,   casting foundries,  pottery makers,  farm machine manufacturing,  and -- of more than passing interest -- brewing and distilling.

In this vigorous economy,   there was a need for craftsmen like shoemakers and tailors.   Bernhardt Boers soon set up his own tailoring business.   In an 1883 city directory he is listed as a tailor at 408 Oak Street.   His wife may have worked by his side.   A census document lists her occupation as “tailoress.”   Bernhardt and Anna had eight children, of whom two died in infancy.   Among the living was Paula’s grandmother,  Elizabeth,  called “Lizzie” by her brothers,  born in 1876.

George Weber,  Paula’s great grandfather,  was born in Peoria in 1847.   We know nothing of his parents except that in the 1900 Census, they are recorded as having been born in Germany.   His occupation was saloon keeper.  We have an 1883 Peoria business directory in which George advertised his establishment,  located at 206 North Fayette St.,  as “saloon and beer bottler.”  He married Albina Huber, a Peoria girl who likewise was born in the U.S., in 1849, to German immigrant parents.  We know little about Albina’s parents, including their names,  except that they eventually resided in Peoria and Albina’s family was involved in the local distilling industry.   A contemporary Peoria directory lists an Emil J. Huber as a saloon keeper,  but we have no records directly linking him with Albina.

Brewing and distilling were common occupations in Peoria of that era.  At one time Peoria produced more whiskey than any city in the United States.  So great was the revenue from the whiskey tax that Peoria share of taxes paid to the federal government was greater than any other town in Illinois, including Chicago.  An abundance of corn and barley,  good water, and ample transportation were reason why beer and whiskey were major Peoria products.   From 1837 to 1919 and the onset of Prohibition,  the city housed 24 breweries and 73 distilleries.  Among them were the Leisey Brewery, below, in which George Weber is said to have worked for a period of time. 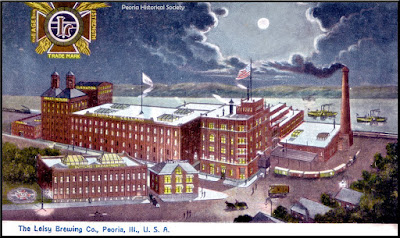 The Webers had four children,  of whom the only male child was Hermo Henry Weber, Paula’s grandfather, born in 1877.  He was one of twins.  We know little about his early life, education, or how he met his future wife.  Henry married Elizabeth Boers (whom we met earlier) in Peoria, date uncertain.   They then moved to Independence, Iowa, where Hermo had a job as a bookkeeper for the Maytag Company which in those days was manufacturing farm equipment and, briefly,  automobiles,  as well as kitchen appliances.   The couple’s first two children would be born there,  Hermine in 1911, and our Grandmother Aileen Catherine in 1913.  Aileen was born on January 4, 1913, in Independence,  Iowa,  and baptized at St. Joseph’s Church on January 19.   A third child,  Hubert, was born to Hermo and Lizzie in 1915.

.   At some point the couple with the children moved back to Peoria where marital discord soon was to break up the family.  Hermo has been depicted as a stubborn,  demanding and penny-pinching husband who found it difficult to get along with other people.   As a result,  he frequently was  unemployed.   His behavior became unacceptable to Lizzie.  She sought and was granted a divorce.  After the divorce Hermo stayed in Peoria and moved in with his spinster sister.  Eventually Hermo moved to California where he died.  Neither married again.

Lizzie was faced with the need to keep her family together despite having a difficult financial situation.  She moved to Milwaukee with the three children and lived for a time with her brothers,  Barney and Max,  who were musicians and cigar-makers.  There this single mother of found work as a stenographer in a local hotel.  She, with her brothers’ help, was able to keep the family together.

Posted by Jack Sullivan at 5:19 AM