Charles Dickens in the Round

During recent years I have sold or given away the bulk of a collection of vintage whiskey containers but have never been able to part with set of china mini-jugs issued about the mid-1980s by the Pick Kwik Wine & Spirits Co. of Derby, England.  In marvelously realized underglaze transfers they dramatize scenes from novels by Charles Dickens to advertise Pickwick Scotch Whiskey.  The base identifies the maker as the John Humphrey Pottery of Stafford, England.

Although virtually all of Dicken’s novels contained line illustrations, over time they represented the work of a number of artists whose styles while differing slightly are similar.  Rendered in black, blue and brown, the images viewed here “in the round” are generally faithful to the original drawings.  With each jug holding at most two or three swallows of whiskey, they are a unique advertising issue. 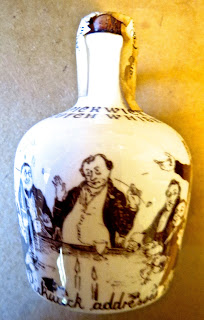 Appropriately, three of the mini-jugs display scenes from Dicken’s first novel, “The Pickwick Papers,” a runaway success that almost overnight made him a super-star of English literature.  The story follows the adventures of Samuel Pickwick, a genial and wealthy old gentleman, sometimes guilty of over-imbibing, who is the founder and president of the Pickwick Club.  A jug shows him addressing the small gathering suggesting that he and three other "Pickwickians" should make journeys to locales away from London and report on their findings to the other members of the club.  The travels of Pickwick and his friends throughout the English countryside by coach provide the chief subject matter of the novel. 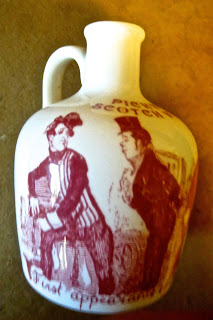 Another jug is entitled “The first appearance of Mr. Samuel Weller.”  Sam does not appear until Chapter 10 when Pickwick meets him working at a tavern and takes him on as a personal servant and companion on his travels.  While Pickwick is a character having an almost childlike simplicity, Weller, a Cockney, is ‘street-wise’. Weller is the more experienced of the two despite his youth and the most intelligent character in the novel.  Sam becomes deeply attached  to the elderly gentleman and helps him in a variety of difficulties. 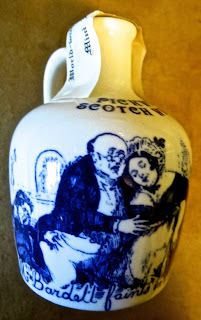 The most dire of these is Pickwick’s entanglement with a widow, Mrs. Bardell. As his landlady: “She waited on him, attended to his comforts, cooked his meals, looked out his linen for the washer-woman when it went abroad, darned, aired, and prepared it for his wear when it came home, and, in short, enjoyed his fullest trust and confidence.”  Then she misconstrued some of his remarks as a proposal of marriage and swooned in his arms.  Her suit for breach of promise later bankrupted both, sending them to debtor’s prison. 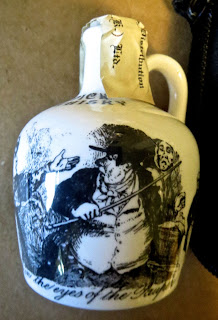 Four jugs commemorate another famous Dickens novel, “Oliver Twist.”  One is entitled “Mr. Bumble is degraded in the eyes of the Paupers.”   Bumble is the cruel and self-important official who oversees the parish workhouse and orphanage of Mudfog, a country town more than 75 miles from London where the orphaned Oliver Twist is brought up.  After marrying the widowed matron of the workhouse, Bumble finds out that his new wife is a sharp-tongued and tyrannical woman who nags and browbeats him in front of workhouse residents. 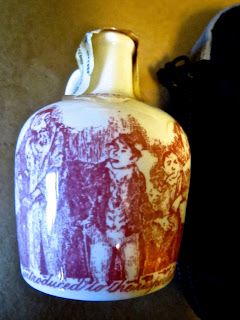 The other three jugs commemorate Oliver’s sojourn with the master thief, Fagin, and his band of street boys who pickpocket and commit other street crimes.  Shown here, Oliver is being introduced to Fagin and the gang.  Fagin is portrayed as a criminal mastermind who kidnaps orphaned children and trains them to be thieves in return for sheltering and feeding them.  He keeps the money for himself.  Next to him is his chief lieutenant, known as “The Artful Dodger.”  Dodger, characterized as a child who acts like an adult, wearing adult clothes that are too large for him. 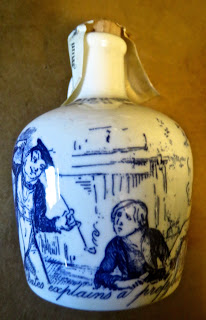 Another of the gang is Charles Bates, shown here talking to Oliver about the fine points of professional thievery.  He is the only member of Fagin's gang to reform. In the final chapter Dickens states that Charley left London to work as a farm hand, later becoming a shepherd.  Dicken wrote: ”Master Charles Bates…fell into a train of reflection whether an honest life was not, after all, the best. Arriving at the conclusion that it certainly was, he turned his back upon the scenes of the past, resolved to amend it in some new sphere of action.” 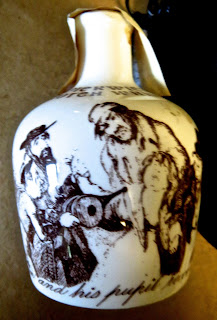 The last Oliver Twist jug depicts one of the most chilling scenes in all of English literature:  the murder of Nancy,  who has been deeply protective of Oliver, by the brutal Bill Sikes, an adult criminal associated with Fagin who believes Nancy has betrayed the gang.   Nancy is portrayed as highly sympathetic and readers have been known to weep at reading Dickens wrenching description of her demise. 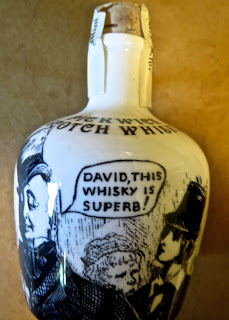 The last jug is a reference to Dicken’s 1850 novel, David Copperfield, but has nothing to do with the story.  On the left is Wilkins Micawber, one of the author’s most delightful characters.  Often down on his luck financially, Mr. Micawber is known for his optimism, identified with the belief that "something will turn up." In this depiction he is telling Copperfield, far left, “David, this whiskey is superb.”

Note:  This is the second article on this blog to feature Samuel Pickwick and whiskey.  A post on August 14, 2015, describes his general association with strong drink through the years.  It is entitled:  “Mr. Pickwick — ‘The Old Gentleman’ Advertising Alcohol.”

Posted by Jack Sullivan at 5:10 AM