Risqué’ Whiskey V: The End of the Line?

Foreword:  Over the past decade this blog on four prior occasions has featured articles dealing with the propensity of pre-Prohibition whiskey advertising to use suggestive and nude images to sell booze.  In the Note below I have listed those prior offerings.  During the past three years since the last such post, I have been able to collect ten more examples.  They were found on saloon signs, trade cards, pocket mirrors, shot glasses and other whiskey memorabilia. While the genre has by no means been exhausted, finding additional illustrations has become increasingly difficult.  Thus the title of this post. 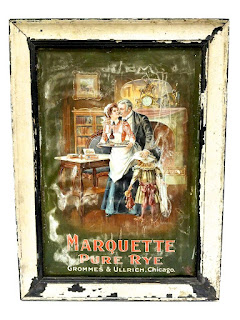 Grommes & Ulrich have provided a delightfully suggestive tableau for a saloon sign advertising their “Marquette Pure Rye,” a whiskey ironically named for a Jesuit priest.  The master of the house is giving a quick kiss to an unresisting maid bringing him a bottle of whiskey.  The scene is completed by the gent tossing the maid’s apron over the head of his onlooking daughter.  Hubert Grommes and Michael Ulrich were proprietors of a liquor, wine and speciality grocery store on Chicago’s LaSalle Street for almost half a century.

Partially or totally bare breasted Indian maidens were another common theme for saloon signs.   In Saginaw, Michigan, Otto L. Dittmar, president, and L.R. Cooper, secretary-treasurer, presented this appealing image of a Native American girl to wholesale customers such as saloons, hotels and restaurants.  Dittmar, Cooper & Co. sold both at wholesale and retail from their liquor store at 300-302 Lapeer Avenue.

Somehow a partially clothed form was more acceptable for advertising whiskey if it was a reproduction of an artist’s rending.  The image of “Flora” is one of several from a booklet entitled “Famous Paintings…Funny Stories” that would have been given to the retail customers of I. Trager & Co., a Cincinnati liquor house.  All the paintings featured nudes.  “Flora” was the work of Max Nonnenbruch (1857-1922), a Germain painter from the Munich School, known for his Neoclassicism scenes.

The Tragers’  Ohio liquor house had a penchant for undress.  It issued a trade card featuring a scene in which a winged and naked Cupid is whispering into the ear of Venus, in Greek mythology, his mother.  The company, according to Cincinnati directories, was in business from 1887 until 1918 when Ohio Voted “dry.”  The proprietors were I. Newton and J. Garfield Trager.  They were being supplied by the Old Darling distillery of Prestonville, KY.

John A. Bennett, the proprietor of the Crystal Bar, on this pocket mirror below advertised with full frontal nudity to his Forth Worth clientele The discovery of celluloid had made possible capturing elaborate color scenes on these advertising items and proved popular with the public.  Bennett advertised vigorously, emphasizing in his print ads his “Special Hand Made Sour Mash Whiskey” made by Master Distiller H. M. Levy in Trimble County, KY. 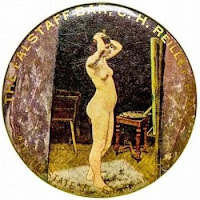 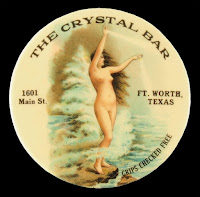 Of all the risqué items that pre-Prohibition men issued to wholesale and retail customers, the most blatant use of nudity to sell whiskey was from a saloonkeeper in perhaps the most unlikely city in America:  the so-called “City of Saints,” — Salt Lake City, Utah.  Shown above is a pocket mirror issued in the Mormon city that displays a nude woman admiring herself in a mirror.  It was one of several such mirrors issued by Charles H. Reilley.  In 1892 he opened a retail liquor store at State and First South Street.  Reilley called it the Elk Liquor Store.  The establishment likely held a saloon. 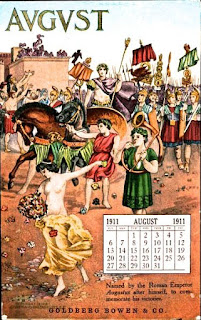 Yet another common liquor advertising item was calendars.  Shown here is the August 1911 page from Goldberg, Bowen & Company of San Francisco.  It notes  that  August was named by Roman Emperor Augustus Caesar after himself to commemorate his military feats. It shows the emperor in a victory parade led by a mostly unclad lass who is spreading rose pedals in the path of his chariot. The company’s origins began with  Bowen Bros., fruit merchants, and grocery, and wine and tea merchants, Lebenbaum & Goldberg. In 1881 the two firms consolidated and became Lebenbaum, Goldberg & Bowen. In 1885 Bowen bought out Lebenbaum and the company became known as Goldberg, Bowen & Co. 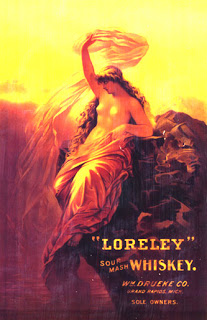 William Drueke, a German immigrant who settled in Grand Rapids, Michigan, featured a whiskey he called “Loreley” and marketed it with a bare-bosomed figure of a woman.  It recalls the German legend of a beautiful maiden who threw herself into the Rhine River in despair over a faithless lover and was transformed into a siren who lured fishermen to destruction. In English she is known as Lorelei.  With a partner Drueke opened his own Grand Rapids liquor house in 1883 but dissolved the partnership in 1888 and became sole proprietor. The business name was changed to Wm. Drueke Company.

Shot glasses were not a usual medium for nude images but from time to time were employed by liquor dealers.  For their shots advertising “Spring Hill Perfection Whiskey,” Lazarus and Adolph Scharff of St. Louis chose a Lorelei-like figure in a flowing dress.  Often calling themselves distillers, the Scharffs were drawing liquor from several sources including from a registered distillery in Anderson County, Kentucky.  Their firm success is indicated by their being in business from 1883 to 1918, a run of 35 years. 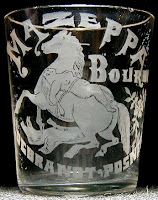 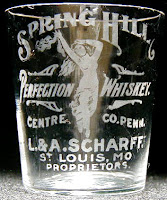 Although pictures on shot glasses were small, they often showed off the artistic abilities of the craftsmen who etched them.  So it is with the final image in this series, an elaborate illustration apparently of Lady Godiva. The large rearing horse, apparently spooked by a tree branch, and apparently in danger of throwing the nude passenger, provides a lively ad for “Mazeppa Bourbon.” This was one of at least nine brands featured by Hildebrandt, Posner & Company of San Francisco.  This wholesaler claimed ownership of the Rock Island Distilling Company  of Covington, Kentucky.